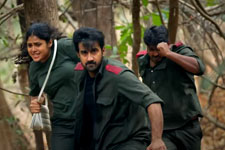 Sai Tulasi Neppali / fullhyd.com
EDITOR RATING
6.5
Performances
Script
Music/Soundtrack
Visuals
7.5
6.5
7.0
7.0
Suggestions
Can watch again
No
Good for kids
No
Good for dates
Yes
Wait for OTT
Yes
Director Merlapaka Gandhi gets it: odd pairings make for great comedy. And so Like, Share & Subscribe has the oddest of matches - YouTube influencers and Naxalites - put in absurd situations to bring us laughter, romance, and a touch of endearing stupidity.

Wannabe travel vlogger Viplav (Santosh Sobhan) goes to Araku with a cameraman Jack Daniels (Sudharshan) in pursuit of YouTube fame. There he runs into his online crush, a YouTube creator Vasudha (Faria Abdullah), who is documenting her own trip for millions of her subscribers. Through a jumble of missteps and eccentric circumstances, Viplav, Daniel and Vasudha get kidnapped by a runaway band of Naxals led by a dimwit Brahmanna (Brahmaji). The hostage situation devolves into a comedy of errors when it is discovered that Vasudha's father, the DGP, would make an even more valuable hostage for the Naxals.

You have to give it up to Merlapaka Gandhi for his boldness in imagining comedy as a device capable of bringing a truce between the Naxals and the State. (Fun fact: Gandhi's birth name, given to him by his communist father, was Che Guevera!) Nearly every movie that portrays the Red Army - from Vijayashanthi's Osey Ramulamma to Rana Daggubati's Virata Parvam?- shows them in a fierce and bleak light.

But not Like, Share & Subscribe. It doesn't have a drop of severity in its veins, even if at times it tries to trick you otherwise with ill-placed monologues about hotbed communist issues. Naxal leader Gopanna (Mime Gopi) rants about the rights of the poor or illegal mining, but minutes later, the story moves onto the goof-ups of Brahmanna and his gang of five bumbling idiots who have been kicked out of the Naxalite gang for being lazy morons. Eager to prove themselves as competent terrorists, they blow up a bridge to try to capture a police officer. But the explosion doesn't harm a fly, and instead becomes an unwitting background for a meme video that Viplav is shooting nearby.

Vasudha, introduced as a self-made, badass, independent woman, seems to be the most sensible of the lot, but every time the story gets a bit serious, her character gets sillier. Faria Abdullah, who plays Vasudha, gives her character a perpetual look of bewilderment on her face - a "what the heck's going on" expression that accurately reflects the audience's reaction to the screwball situations unfolding.

Chaotic energy is welcome in a movie about insecure Naxalites and insufferable influencers, but what don't belong in it are its several randomly placed songs. At one point, Viplav and Vasudev, who have just become unstuck from a puddle of quicksand in the jungle as they try to escape their captors, are suddenly transported to an exotic Thai beach with crystal-blue waters for a duet.

For all its ridiculousness, Like, Share & Subscribe gets its most important element right: comic timing. A hard line to toe given its range of kooky characters. And its success is largely due to the lead actor Santosh Sobhan's fantastic performance as the earnest Viplav. Santosh nails every line with charming ease, and his dialogue delivery rivals those of even the best comedy heroes of today. For one thing, his intonation and timing are far more impressive than those of his supporting actor and certified jokester Sudharshan. 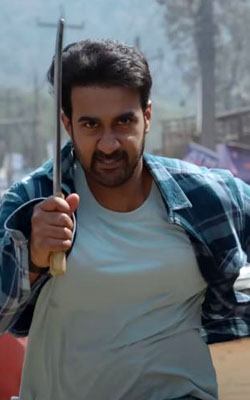 ADVERTISEMENT
This page was tagged for
Like, Share & Subscribe telugu movie
Like, Share & Subscribe reviews
release date
Santosh Shobhan, Faria Abdullah
theatres list
Follow @fullhyderabad
Follow fullhyd.com on
About Hyderabad
The Hyderabad Community
Improve fullhyd.com
More
Our Other Local Guides
Our other sites
© Copyright 1999-2009 LRR Technologies (Hyderabad), Pvt Ltd. All rights reserved. fullhyd, fullhyderabad, Welcome To The Neighbourhood are trademarks of LRR Technologies (Hyderabad) Pvt Ltd. The textual, graphic, audio and audiovisual material in this site is protected by copyright law. You may not copy, distribute, or use this material except as necessary for your personal, non-commercial use. Any trademarks are the properties of their respective owners. More on Hyderabad, India. Jobs in Hyderabad.