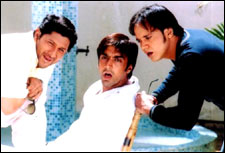 Deepa Garimella / fullhyd.com
EDITOR RATING
3.0
Performances
Script
Music/Soundtrack
Visuals
2.0
2.0
3.0
NA
Suggestions
Can watch again
No
Good for kids
No
Good for dates
No
Wait to rent it
No
Kisse Pyaar Karoon centers around the lives of 3 clods who get through college by bunking classes, memorizing the canteen menu, and wearing tight clothes. They have a meaningful existence of exactly 2 seconds during the credits, and in the rest of the film, have the personalities of tooth-brush holders, but are not half as useful.

One day Natasha flies away on a world tour, and so Sid and Amit try to end John's agony by getting him hitched to Sheetal (Udita Goswami). But Amit's sickly sweet love life is short-lived. That moonstruck look on his face cannot be tolerated by his own friends, leave alone the audiences.

Sid and Amit realize she is stealing him from them, and they try to end their agony by separating the two. They bring Natasha back into John's life, and kidnap Sheetal and make it look like she's dead. The handcuffed Sheetal, meanwhile, is falling in love with Sid. Sid cannot remember whether Munnabhai was made before or after the shooting of this dud, but he tries to make up to his conscience by endorsing Domino's Pizza in the middle of a romantic scene.

Kisse Pyaar Karoon tries hard to make you laugh, but falls flat. And it's embarrassing to watch Arshad Warsi do scenes and say things that slip past the line of profanity. Udita Goswami is given a particularly off-colour scene with him. Aarti Chhabria has nothing to do except a song or two. There is a sub-plot involving Shweta Menon as a hooker. Each of these three women makes the other two look like Oscar-winning actresses.

The music of this one sounds like the Battle Of Panipat. The visuals don't rise above looking like they were shot on the battlefield of that one. And it's sad that the makers of this flick weren't shot anywhere.

On the whole, this one is shoddy as shoddy can get, and a great way to fall asleep.
Share. Save. Connect.
Tweet
KISSE PYAAR KAROON? SNAPSHOT

ADVERTISEMENT
This page was tagged for
Kisse Pyaar Karoon? hindi movie
Kisse Pyaar Karoon? reviews
release date
Arshad Warsi, Ashish
theatres list
Follow @fullhyderabad
Follow fullhyd.com on
About Hyderabad
The Hyderabad Community
Improve fullhyd.com
More
Our Other Local Guides
Our other sites
© Copyright 1999-2009 LRR Technologies (Hyderabad), Pvt Ltd. All rights reserved. fullhyd, fullhyderabad, Welcome To The Neighbourhood are trademarks of LRR Technologies (Hyderabad) Pvt Ltd. The textual, graphic, audio and audiovisual material in this site is protected by copyright law. You may not copy, distribute, or use this material except as necessary for your personal, non-commercial use. Any trademarks are the properties of their respective owners. More on Hyderabad, India. Jobs in Hyderabad.