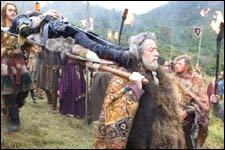 Samrat Sharma / fullhyd.com
EDITOR RATING
4.0
Performances
Script
Music/Soundtrack
Visuals
6.5
1.5
5.0
7.0
Suggestions
Can watch again
No
Good for kids
No
Good for dates
No
Wait to rent it
Yes
There's a lot of good in this new genre film by Howard McCain, who has co-written it with Dirk Blackman. There're Vikings and ancient alien dragon monsters and an appealing cast and a surprisingly good amount of well-done FX. The sum total, though, leaves a lot to be desired. After having lambasted all of Hollywood's cynically mass produced studio pap, here is an independent film with creativity and ambition that we should embrace; pity it is not very good.

One of the problems of Outlander is that it is clumsy and without polish. The film's shots are just a little off, the composition of frames that none touch short of keeping our interest every time. McCain struggles with his narrative structure and pacing, despite telling a fairly linear story. He is good in a TV movie sort of a way, but the film does not embrace its big screen-ness entirely.

James Caviezel plays Kainan, a humanoid alien that falls on Earth during 709 AD. He crashlands in Norway near a Viking village, and is soon captured by a Viking tribe led by Rothgar (John Hurt). The film then meanders too much trying to add soul to the proceedings by lingering on to sub-plots that include Rothgar's daughter and an aggressive general. The plotting is clumsy, and the film suffers as our attention is diverted for crucial minutes into the film.

Another problem with the movie is that it references without adding any real context of its own. Kainan is hunting a beast which his kind has exterminated completely but for the last one. The race of beasts is called Moorwen, and they are alien dragons. Once the dragon enters the fray, there are a lot of references to Beowulf - in fact, a damn near stealing of the epic.

But it doesn't stop at that, as other films are continually borrowed from - interesting bits from movies like The 13th Warrior, Predator and such. Outlander quickly becomes a mish-mash of genre, borrowed ideas and some original ones, which get a little too much in terms of presentation. If at the core of it the film was meant to be entertainment, the makers have tried their best to obfuscate it with meaningless additions to the narrative.

It's not all bad, though. Some of the acting is reminiscent of the Conan movies of past, and the FX are actually very well done for a film that was independently funded and completed. There's a small but powerful role by Ron Perlman, better known to us as Hellboy, whose hammer wrecks gleeful havoc.

For a genre film, the genre tropes work insanely well, too. There is much to be enjoyed via creature attacks, gore and mindless hammer violence, and the obligatory scrappy men making do with whatever they have â€" in this case Kainan's ship and the metal it is made of. It's fun while it sticks to what it is good at.

The last problem with Outlander is damning, though. The main hero is too much of a flat character. Kainan's back-story and on-screen presence amount to zilch in terms of informing us about his character. The unsatisfactory climax and overall arc of Kainan get a little hard to palate as well.

For a movie that is a small genre sneak, Outlander has great promise. As a film that cannot live up in execution, and cannot stick with one sort of story to tell, the movie is a crushing defeat for independent filmmakers. If you have the time and inclination, go try it out and see if it catches your fancy. But be warned, despite the leeway you may give a genre flick, this still remains a chance missed.
Share. Save. Connect.
Tweet
OUTLANDER SNAPSHOT

ADVERTISEMENT
This page was tagged for
english movie outlander
Outlander english movie
Outlander reviews
release date
James Caviezel, Sophia Myles
Follow @fullhyderabad
Follow fullhyd.com on
About Hyderabad
The Hyderabad Community
Improve fullhyd.com
More
Our Other Local Guides
Our other sites
© Copyright 1999-2009 LRR Technologies (Hyderabad), Pvt Ltd. All rights reserved. fullhyd, fullhyderabad, Welcome To The Neighbourhood are trademarks of LRR Technologies (Hyderabad) Pvt Ltd. The textual, graphic, audio and audiovisual material in this site is protected by copyright law. You may not copy, distribute, or use this material except as necessary for your personal, non-commercial use. Any trademarks are the properties of their respective owners. More on Hyderabad, India. Jobs in Hyderabad.