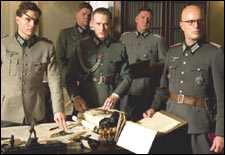 Samrat Sharma / fullhyd.com
EDITOR RATING
5.0
Performances
Script
Music/Soundtrack
Visuals
8.5
5.5
7.0
7.5
Suggestions
Can watch again
No
Good for kids
No
Good for dates
Yes
Wait to rent it
Yes
Valkyrie is a strange film. It's based around a premise everyone knows the outcome of, but still manages to stay exciting in its third act. On the other hand it has the best acting talent assembled for a major studio picture in a long time, and manages to come off as a light, frivolous film with no depth or character.

How did Bryan Singer do that? He went ahead and made a very serious version of an Ocean's movie, and managed to sap all character from the leads by giving them nothing more than cardboard cutouts to play with. In as much as it is a thriller, a caper film, Valkyrie works. It also ignores any psychological or ethical quandaries people trying to save their fatherland by killing the leader of it would face, content in trying to be a prestigious thriller and nothing else.

At the dead center of it all is Tom Cruise playing Colonel Claus von Stauffenberg, the man who decides that he must kill the Fuehrer in the days leading to the end of World War II if he has to save his country. He finds himself in the middle of a conspiracy featuring the creme de la creme of Hitler's Germany - some of the finest generals and politicians being in it with him.

He decides to use a plan that is already in place to counter a coup against Hitler - codenamed Valkyrie - and plans to use it to stage one. The entire plan hinges on Stauffenberg to get close to Hitler and make him sign an amendment to the plan, while setting up a bomb at the same time.

The film takes this delectably ironic twist and plays it straight - nothing about the inherent double take is explored much less acknowledged. Exactly like that is the main character - Cruise plays it completely straight. From the first scene where he declares that he would like to kill Hitler, the man unwaveringly shoots ahead and executes his plan. Any stumble is a momentary distraction, and never a point of introspection.

This leaves a character which we never truly understand as we never really see who he is or what he stands for. Much like this are other characters in the film. Kenneth Branagh's Major-General Henning von Tresckow has a presence that is always looming above the plan, being one of the most important characters thereof. Surprise then, that after his initial appearance he is not seen until the penultimate moments.

Everyone seems like this - they seem like they are interesting characters with motivations, but just what they are is never fully explored. It is almost as if there was a prequel book we should have read before understanding these people and their motives. Every psychological, emotional or dramatic tone in the film was wrung out to leave this dry, completely inconsequential tale as a straight arrow.

This is the only level at which it works. Singer relies heavily on the enviable cast he has assembled. Bill Nighy, Eddie Izzard, Terence Stamp and Tom Wilkinson all dig into their roles with relish, and present a fascinating tableau of conspirators. They have bit roles, but they play it with enough self-doubt and remorse that you feel the weight behind their decisions.

Not so Cruise. His dry rendition of a coup leader leaves much to be desired in a film that could have been so much more. Working as a plain thriller, the straight-up Cruise is still okay, but in the face of these fantastic actors, his is the only glaring spot of non-thought that stands out. The film itself is poorer for it; as much as the last act is exciting, it is not entirely grab-the-arm-rests thrilling. The punch it lacks is entirely due to our total non-investment into any of the characters.

It is a strange neither-here-nor-there film, in the end. Despite all the fantastic actors and the period setting, it doesn't have much soul so it hardly qualifies for serious cinema. On the other hand, it is not half as exciting as a regular mainstream thriller should be. It is a rendition of what is happening and who is doing it, but it lacks the why - which makes it strangely ineffectual.

Valkyrie won't waste your time: Newton Thomas Sigel has done some amazing work to ensure you keep sitting. But this movie won't make your day either. Audiences walking out oddly unaffected by a film at the peak of Oscar fever is no good tidings for the movie.
Share. Save. Connect.
Tweet
VALKYRIE SNAPSHOT

ADVERTISEMENT
This page was tagged for
Valkyrie english movie
Valkyrie reviews
release date
Tom Cruise, Kenneth Branagh
theatres list
Follow @fullhyderabad
Follow fullhyd.com on
About Hyderabad
The Hyderabad Community
Improve fullhyd.com
More
Our Other Local Guides
Our other sites
© Copyright 1999-2009 LRR Technologies (Hyderabad), Pvt Ltd. All rights reserved. fullhyd, fullhyderabad, Welcome To The Neighbourhood are trademarks of LRR Technologies (Hyderabad) Pvt Ltd. The textual, graphic, audio and audiovisual material in this site is protected by copyright law. You may not copy, distribute, or use this material except as necessary for your personal, non-commercial use. Any trademarks are the properties of their respective owners. More on Hyderabad, India. Jobs in Hyderabad.