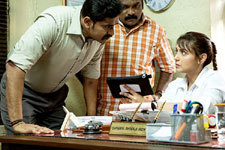 Ravi Kandala / fullhyd.com
EDITOR RATING
6.5
Performances
Script
Music/Soundtrack
Visuals
7.0
7.0
5.0
8.0
Suggestions
Can watch again
No
Good for kids
No
Good for dates
No
Wait to rent it
No
Mardaani is extremely disturbing. Let's call that out first. If you are someone who pays scant regard to A certificates issued for films and takes your kid along, don't for this one. The movie depicts the issue of child trafficking in the harshest ways possible, and you do not want your children to see it.

It is interesting that Yashraj Films has made a movie like Mardaani. The sudden movement of the granddads of glitz to grit is a definite shocker. The glossy locales of Switzerland give way to the dingy bylanes of Mumbai. The vibrant frames give way to shadows. And Pradeep Sarkar, he of the Parineetas and period romances set in grand old Kolkata, makes a film that oozes Mumbai and Delhi in every frame.

The movie is a cat-and-mouse game between a tough cop and a remorseless criminal who is aided by his mom and dad. Shivani Sivaji Roy (Rani Mukherjee), a senior inspector with the crime branch, is a no-nonsense cop. When a girl she'd rescued from a railway station and handed over in a shelter home disappears, Shivani starts investigating the case personally.

The search leads to something big, and Shivani realizes that she's not dealing with an isolated kidnapping here, but with an organization with its roots deep in the ground and a reach in the higher echelons of power. The mastermind behind the racket, Karan Malhotra (Tahir Raj Bhasin), notices the unusual interest that Shivani is showing in the case. Thus begins a duel between the two.

If you expect a realistic conclusion to this gritty drama, well, it is still a Yashraj film.

Pradeep Sarkar keeps the movie crisp - at a runtime of less than two hours, the film clips along at a fair pace. There is absolutely no sugar-coating, and the graphic scenes in the movie surely provide no titillation - a shiver runs through your spine each time the camera returns to the trafficking dens. The denouement, though dramatic, is received well by the audiences - we heard some hooting and clapping.

Rani Mukherji does well in her tomboy role. The DOP frames her in several close ups, and she musters up all her experience to lend credibility to the character. The real revelation is Tahir Bhasin. Karan Malhotra is a complicated character to play - an educated guy dealing in drugs and women, who's changed his name to Walt inspired by Breaking Bad and who is evil because that's the only way he is and not due to circumstances or some cock and bull incident in his flashback - and Tahir nails it. He's smooth, suave and exudes menace with his talk.

The supporting cast is brilliant, with Mona Ambegaonkar deserving special mention for working wonders in her brief role.

The film is shot beautifully - the DoP deserves a pat on the back. We've seen movies with background scores that complement the theme - here the cinematography does the job. From the claustrophobia-inducing shots in the den to the naturally-lit streets of Delhi, the filming is wonderful.

Mardaani is a disturbing film - we know we are saying it again, but please make a note before you venture out. Though the message is lost in the dramatic finale, the film will leave quite an impression on you.
Share. Save. Connect.
Tweet
MARDAANI SNAPSHOT 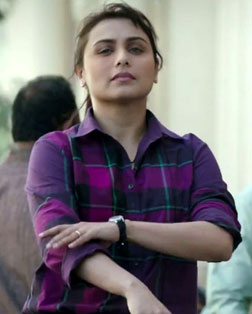 ADVERTISEMENT
This page was tagged for
Mardaani hindi movie
Mardaani reviews
release date
Rani Mukerji, Tahir Raj Bhasin
theatres list
Follow @fullhyderabad
Follow fullhyd.com on
About Hyderabad
The Hyderabad Community
Improve fullhyd.com
More
Our Other Local Guides
Our other sites
© Copyright 1999-2009 LRR Technologies (Hyderabad), Pvt Ltd. All rights reserved. fullhyd, fullhyderabad, Welcome To The Neighbourhood are trademarks of LRR Technologies (Hyderabad) Pvt Ltd. The textual, graphic, audio and audiovisual material in this site is protected by copyright law. You may not copy, distribute, or use this material except as necessary for your personal, non-commercial use. Any trademarks are the properties of their respective owners. More on Hyderabad, India. Jobs in Hyderabad.