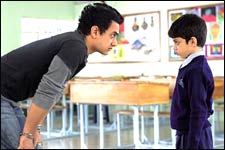 EDITOR RATING
6.0
Performances
Script
Music/Soundtrack
Visuals
NA
NA
NA
NA
Suggestions
Can watch again
NA
Good for kids
NA
Good for dates
NA
Wait to rent it
NA
It hurts to say this, but what Taare Zameen Par needed was a good director to make it a true masterpiece.

In story-telling, the ends do not justify the means. And when your story lasts 2½ hours, the means are the ends. Taare Zameen Par is a noble effort, messed up in narration. It's like being on a poorly-maintained amusement park roller coaster that suddenly slows down just when the ride is beginning to get exciting, reaches the first sharp curve slower and later than it should, plods along for a while from there, and then takes a short cut to make it to the end in time, skipping most of the promised track.

So what you went to see, you don't get to see - what you get to see, are just its beginning and its ending. This was supposed to be the tale of a gifted teacher who helps a dyslexic kid work with this world and possibly even excel at it. There is, unfortunately, too much description of the problem, and too little of the solution.

And that makes this one a triumph of show-off over substance - the sequences showcasing the child's disorder, if we may call it that, are admittedly well-written, but that appears the writers' comfort zone. So it plods on and on - Aamir Khan isn't even there in the first half, and the movie self-indulgently shows scenes upon scenes and songs upon songs of the child's life and his world-view. And when the real challenge, the resolution, presents itself, it's glossed over simplistically: the cure to dyslexia is being gentle and appreciative.

Indeed, that's it. Those of you who did not know this, please put your hands up, we want to see what you look like.

There's a chance we're being uncharitable - the film will certainly change the way a lot of parents who watch it bring up their children, it will increase sensitivity to the condition, and it might even result in increased enrolling in NGOs. However, this is still a feature film promising entertainment, a tale well told, and not a documentary. And that leaves the other 50% of the movie to contend with. For, you've gone seeking a payoff.

TZP deals with Ishaan Awasthi (Darsheel Safary), a kid with problems in working with alphabets and numbers, and struggling to live in a world that just thinks he's lazy, slow, idiot, duffer. When he's finally sent off to boarding school by his parents after his city school gives up on him, he's put through further torment by teachers there. All this takes the entire first half, and while for most adults watching it it provides memories of school life, it quite overstays its welcome.

A temporary art teacher, Ram Shankar Nikumbh (Aamir Khan), then lands at the school, and, himself dyslexic in his childhood, immediately empathizes with Ishaan's situation, and starts a process of trying to reinstill confidence in him and help him learn. Only, that's not as romantic in execution as it sounds.

For starters, Mr. Nikumbh cries at the kid's condition - and once too many times - and that affects your judgement of the film. Then, he puts too many fundas in a few sequences, which, in a movie that used subtlety right until then as the preferred mode of communication, juts out obliquely. And finally, the treatment of the condition, which you'd gone to the movie for, lasts less than 10 minutes, and has nothing innovative in it.

The film, of course, has a fairy tale ending, which, in tales of triumph over human adversity, usually helps gloss over several sins. And it's up to you to decide if that fairy-tale ending actually misses the point - so is the film finally about a gifted child who can win competitions? But unless you are seeking too much of reality, the ending is just what makes for a lifetime of hope.

TZP showcases several pieces of good writing in the first half's characterization of Ishaan. The songs are superbly written, rendered and shot. And the actors are almost all top-notch. Darsheel Safary delivers a performance that is almost certain to bag some top awards. Aamir Khan is, of course, Aamir Khan. Tisca Chopra and Vipin Sharma, as the troubled parents of the kid, put in moving efforts. The family and school scenes all stroke plenty of association or déjà vu, as the case might be with you.

Taare Zameen Par is still worth a watch for what it has - it'll certainly help you be a better parent. It's never too late for that ...hopefully.
Share. Save. Connect.
Tweet
TAARE ZAMEEN PAR SNAPSHOT

See Taare Zameen Par full details
TAARE ZAMEEN PAR USER REVIEWS
1 - 15 OF 44 COMMENTS  |  NEXT  |  LAST
POSITIVE  |  NEGATIVE |  NEWEST  |  OLDEST  |  MOST HELPFUL  |  LEAST HELPFUL
USER RATING
8.6
207 USERS
Performances
Script
Music/Soundtrack
Visuals
NA
NA
NA
NA
Can watch again - NA
Good for kids - NA
Good for dates - NA
Wait to rent it - NA
Die Hard-5 on 1st Mar 2008, 6:17pm | Permalink
Anshu has a lot of 'growing-up' to do which is hard to achieve in one life time...
RATING
2
Anshu on 1st Mar 2008, 3:25pm | Permalink
Die Hard 5, from ur id i presume that u're a big follower of those brainless pieces of shit like Die Hard and Rambo.so its not surprising that u give movies like TZP 1 star. Secondly, if the movie was not made in the right spirit, people wud not cry. It'd only make them look for the nearest exit.

I suppose, just like the reviewer's mind, ur mind is also not capable of absorbing classic, thinking movies like TZP. In that case my sincere advice for u wud be to not watch movies which u cannot understand and waste ur/ur parents money. Go n watch the B-grade stuff like Die Hard which u'll be able to understand better.

1. Had the movie was shot in right spirit, nobody would have cried.

2. Second, that's exactly the intention of the Director i.e. to make the 'unsuspecting cynics' like you to cry.

All thee reviewers, take note of this commandment:

Thou shalt not watch movie trailers before the movie!

I guess the reviewer went to the movie hall expecting something and got something else in return.

Personally, this is a BRILLIANT movie. Heck, it made the other cynical and stoic ME shed a tear or two. Now that's an achievement!

Overanalysis killed the cat, the dyslexic child and tweety bird!

I've seen this movie thrice... within two weeks. I have laughed, cried and analysed it to death. And I still think it is perfect.

The TZP team has a story to tell. And they tell it with a lot of heart and technical brilliance. Throw in the best child acting role I have seen (ever!), some amazing music and a cinematically satisfying and cathartic ending... And you have Taare Zameen Par.

Johnny Gaddar and Taare Zameen Par... Two movies from completely different genres... But they have reinstilled my faith in Bollywood. There is hope after all.

Fullhyd... ease up! 2.5 is ridiculous for a movie like this! Get real guys! A movie that has started the hottest debate of last year and has managed to make a mark on hundreds of thousands of people certainly deserves better!

RATING
10
KIRAN PINJARLA on 18th Jan 2008, 4:55pm | Permalink
The movie is lot better than what i read here. This movie is really a master piece.
RATING
8
Koneti Gopinath on 14th Jan 2008, 1:54pm | Permalink
I read the first sentence of the review on the day of the release and thought for a while and decided that I will watch the movie first and then proceed with rest of the movie.

1. "It hurts to say this, but what Taare Zameen Par needed was a good director to make it a true masterpiece."

What do you want to review. Movie or Amir Khan. Why do you sit before the keyboard with Amir's backpack.

2. "There is, unfortunately, too much description of the problem, and too little of the solution."

IS there a commandment that says that Solution >= Problem ???

I thought for a while isn't the key is smaller than the lock.

3. I felt happy for one reason. Success of future films does not (necessarily) depend on film reviewers alone. there would be far more factors which decide the fate. Whether fullhyd.com gives 2 and half stars or something else does not decide the fate of success of TZP. But a good review could have helped fullhyd earning some mileage.

For many current loyalists (or just any reader) who will read this (TZP review), that is a possibility that they will want to be different from tomorrow by giving less importance (less hits !) to fullhyd reviews. Usually a good idea. Again, who's gonna tell them?
RATING
6
Afzal Quraishi on 13th Jan 2008, 12:07am | Permalink
Fullhyd pressed the wrong button this time. Simple story. Great performance by the child. Great lyrics & music. Good screenplay. Reviewers at fullhyd.com should learn to appreciate good movies..
RATING
8
Kalyan on 11th Jan 2008, 2:05pm | Permalink
I think the reviewer should get off his knees. He's made a desperate attempt to blow off this movie. "This was supposed to be the tale of a gifted teacher who helps a dyslexic kid work with this world and possibly even excel at it"- i don't think so. You've probably missed the point. On the whole a pathetic review for an AWESOME movie.
RATING
10
Krishna on 10th Jan 2008, 6:27pm | Permalink
duh...i wonder some reviewers so naive.just check out the response
from the audience..how moving the film is really,rather going by bashing a good movies by carping about nitty gritty details.

amen..lets peace prevail
RATING
10
Aamchi Hyd on 5th Jan 2008, 1:21pm | Permalink
Why is the editor being so defensive (plus contradictory - best site for hindi movie reviews, then says its hyderabad specific). People, you have reviewers like Priyanka Pulla et al, and the tone of your reviews is fun. You don't have to respond to every naysayer's taunts, become defensive and formal, and lose out on your USP - being hip and fun. Just keep reviewing, and read the readers' responses.....or not.
RATING
8
Neha Agarwal on 3rd Jan 2008, 11:28pm | Permalink
Totally agree with your comments. Infact there are a lot more flaws in the movie than you have written about. For staters. AK remains AK the celeb and never becomes Nikumbh the social worker/teacher. He looks like he came to the shoot right from his bed. The characters are too black and white. the story like is stereotypical.
RATING
6
Karthik V on 3rd Jan 2008, 8:49pm | Permalink
"simplistically: the cure to dyslexia is being gentle and appreciative.

Indeed, that's it. Those of you who did not know this, please put your hands up, we want to see what you look like.
"
Boy, o boy right on the target. Nice objective review I must say.
Aamir Khan is the only reason why I still watch Hindi flicks.(There was one more by the name RGV..but that's History). So with huge expectations after seeing the film I must say I was contended with the film. Background score was stupendous, acting top notch and there were moments in the film that punched you right in the heart. But I guess I was expecting a bit more constructive ending that slam-bam-thank-you mam kind of the one we got here.