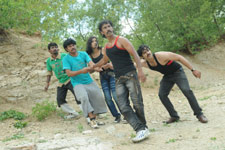 Ravi Kandala / fullhyd.com
EDITOR RATING
1.0
Performances
Script
Music/Soundtrack
Visuals
1.0
1.0
1.0
1.0
Suggestions
Can watch again
No
Good for kids
No
Good for dates
No
Wait to rent it
No
It is said that the field of cinema is like a mire. Once someone comes in lured by the spotlight, there is no return. The ultimate aim is to see oneself on screen as an actor or see one's name on the screen as a technician. It does not matter if they appear in a third-grade film that might or might not make it to the theater, or if the film will be forgotten by the end of the morning show.

It has to be this lure that results in movies like Gatham making it to the theatre. The film had its audio release in August 2011 (at least now, you had better believe us when we tell you we do our research), and was stuck in the cans since then. Why they chose to release it now is a mystery that is best left to the makers of the film.

The film has a bizarre plot - one which we haven't figured out yet. It begins with a shot of a sage with bad make-up suddenly opening his eyes with a vision of nuclear destruction. Then, it introduces four characters, all of whom have around 10 minutes of screen time each. It then moves to a song with one of the leads, with lyrics that go like "he's a star, he's an idol, he's an icon". Next, there's another song, with three of the other leads singing "Enjoy cheseyyi, life mottam enjoy cheseyyi".

The plot (or what we made of it) is about Vidarthi, an owner of a pharmaceutical company, who kidnaps a scientist named Aadya to extract secrets about medicinal plants. He then takes her to the forest so she can point out the medicinal plants (?????).

The film has a 10-minute song about the environment, and at least two or three lectures lasting a minimum of 10 minutes each, about protecting forests. It also features several scientists, all of whom work in college labs with exactly four beakers of coloured solutions and a few pipettes and test tubes.

The villain keeps walking around the forest with the kidnapped scientist, asking her to point out medicinal plants. Some of the characters in the film go missing in between, and are never traced. The list of such glaring, in-your-face loopholes is so long that we leave you to imagine the rest.

The performances are non-existent. None of the film's characters utters his or her lines. The entire movie seems like the director shot montage sequences and imposed some random dubbing on these montages. The actors will never even make it to the last row of backup dancers in the cheapest production that will ever be made in Tollywood.

The technical values make the short films on Youtube look like masterpieces. The movie seems like it was shot on a cell phone with a 1.2 megapixel camera (yes, there are phones with cameras with such low resolution).

It is pointless to go on about any of the other aspects of this film that should have stayed in the cans. Even though we are thoroughly apolitical, films like this make us hope that the impasse in the state ends and the big releases make a big comeback!
Share. Save. Connect.
Tweet
GATHAM SNAPSHOT 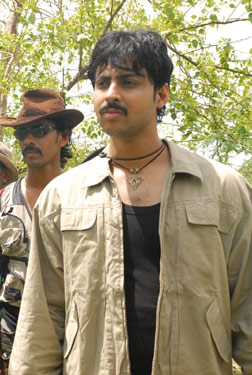 ADVERTISEMENT
This page was tagged for
gatham telugu movie budget
??? ???? ??????
gatham movie review
Gatham
Telugu movies gatham govantam
Follow @fullhyderabad
Follow fullhyd.com on
About Hyderabad
The Hyderabad Community
Improve fullhyd.com
More
Our Other Local Guides
Our other sites
© Copyright 1999-2009 LRR Technologies (Hyderabad), Pvt Ltd. All rights reserved. fullhyd, fullhyderabad, Welcome To The Neighbourhood are trademarks of LRR Technologies (Hyderabad) Pvt Ltd. The textual, graphic, audio and audiovisual material in this site is protected by copyright law. You may not copy, distribute, or use this material except as necessary for your personal, non-commercial use. Any trademarks are the properties of their respective owners. More on Hyderabad, India. Jobs in Hyderabad.