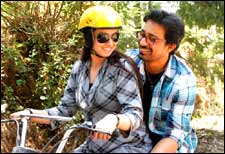 Deepa Garimella / fullhyd.com
EDITOR RATING
3.0
Performances
Script
Music/Soundtrack
Visuals
5.0
3.0
6.0
6.5
Suggestions
Can watch again
No
Good for kids
No
Good for dates
No
Wait to rent it
Yes
Nagesh Kukunoor, who is rightfully credited with having breathed fresh life into Hyderabadi cinema once upon a time, is a perplexing filmmaker. His characters seem to have nuances, and his plots loaded with inches of sensitivity, and yet, his movies don't seem to go beyond the "oh look, I'm a poet" kind of wannabe-ness. Exhibitionistic subtlety, if you may call it that.

Is that all that the director is capable of? Hard to say, really. Maybe we'll agree with a philosophy that believes that bizarre silences can be masqueraded as "pregnant" pauses, but masquerading vacuum as art? Now that's a little tough to take in.

Set in a generic hill station, Mod is a love story revolving around Aranya (Ayesha Takia Azmi) and ardent, creepy, flaky admirer Andy (Rannvijay Singh Singha). Aranya's life consists of her alcoholic father (Raghubir Yadav, easily the best thing about Mod), and her job as a watch repairer and waitress at a small eatery run by her bua (Tanvi Azmi, the second best thing about Mod).

Nagesh Kukunoor was evidently content with picking the cast and a pretty place to shoot, and never rises beyond making this a cute-looking picture postcard. Watching Mod is sort of like browsing a run-down greeting card gallery. There are cheesy, dainty trinkets, all around you, but not a single one of them is charming enough (but firstly, even genuine enough) to compel you to pick it up and pay for the darned thing. (The rest of this review contains spoilers)

The typical Kukunoor-esque laid-back story-telling gets a little too much to handle. Laid-back never meant the absence of emotion, but here, there is never any sense of drama ever. Even after a very weird fact about one of the protagonists is disclosed, and much tension ought to be displayed by everyone, the tone of the film still goes on as if it were a walk in the park. With a very boring uncle, at that.

A few snatches here and there feel as nice as a mug of hot chocolate in a rainstorm, though. A Kishore Kumar tribute runs all through the plot, and Raghubir Yadav breathes tear-jerking warmth into the child-like father who begs his daughter to let him home since he's stopped drinking - pause - lagbhag.

Buaji's buddy-like conversations with her niece ("Is he cute? Is he tall? Is he polite? How is his breath?") and her scoff at "unfettered capitalism", however, reek of artificiality.

Ayesha Takia is deglamorized, and both director and actress behave as though the absence of make-up and stylish clothes were an end in itself. Takia is likeable but never really infuses soul into her character.

As for Rannvijay, we're still not sure who this is more embarrassing for - for Rannvijay, for having picked the wrong film to lead, or for Kukunoor, for having picked the wrong actor to lead the film. The whole split-personality bit is amateurishly written and highly absurd. Couple that with bad acting from Mod's lead actor, and you have a disaster waiting to be forgotten.

Kukunoor cannot afford to congratulate himself on the visuals either. Mod has nothing innovative in the cinematography department, save for the choice of location. The music is unremarkable as well.

Bland and slow, Mod doesn't merit a watch, except if you aren't particular about what you're watching.
Share. Save. Connect.
Tweet
MOD SNAPSHOT

ADVERTISEMENT
This page was tagged for
fullhyd.com movies bollywood
Mod hindi movie
Mod reviews
release date
Ayesha Takia Azmi, Rannvijay Singh Singha
Follow @fullhyderabad
Follow fullhyd.com on
About Hyderabad
The Hyderabad Community
Improve fullhyd.com
More
Our Other Local Guides
Our other sites
© Copyright 1999-2009 LRR Technologies (Hyderabad), Pvt Ltd. All rights reserved. fullhyd, fullhyderabad, Welcome To The Neighbourhood are trademarks of LRR Technologies (Hyderabad) Pvt Ltd. The textual, graphic, audio and audiovisual material in this site is protected by copyright law. You may not copy, distribute, or use this material except as necessary for your personal, non-commercial use. Any trademarks are the properties of their respective owners. More on Hyderabad, India. Jobs in Hyderabad.