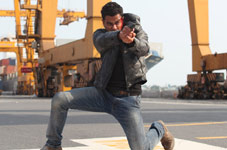 Josh / fullhyd.com
EDITOR RATING
3.5
Performances
Script
Music/Soundtrack
Visuals
5.0
3.0
4.0
6.0
Suggestions
Can watch again
No
Good for kids
No
Good for dates
No
Wait to rent it
Yes
Janardhan's mother is worried for him and approaches a celebrated Jyotish to look at his kundli. Jyotishji perceives a dosh that indicates Janardhan is in grave danger in the coming days, and that would need tantra performed for his life to be saved. Janardhan (Kunal Khemu), known as Johnny, works in Bangkok, and indeed lands in trouble over there where he gets blackmailed by his conniving boss Ramona Bakshi (Manasi Scott) into seducing and killing a girl called Tanya (Zoa Morani).

As he is coming to terms with the situation, Jyotishji's tantra magic works and causes a djinn (Vikram Bhatt) to miraculously appear in Johnny's room. Johnny is convinced that he has to murder this girl in order to save himself, but then he is given an offer by the djinn where he gets to simultaeneously live two different lives - wherein he shoots the girl in one and tries to save her in the other. He could live these lives for a duration of 72 hours and neither of the two lives would be aware of the other. At the end of the 72 hours, Johnny gets to choose which life he would like to continue with.

As far as ideas go, this one is up there with the best. It's a clever play on the notion of Karma, and you feel genuinely curious on how these two lives would play out. Yet, we have to call this a bad film.

There are two kinds of bad movies. The first comprises the ones which you know should never have been made - terrible in the conception itself. It's like the complete opposite of the Immaculate Conception, like Satan plotted to birth misery in 70MM. One appropriate example is Poonam Pandey's latest.

The other kind of bad movies comprises those that begins as great ideas but get watered down to a sorry state of affairs. Bhaag Johnny clearly belongs in here. You watch as things unfold in front of you, on one hand noting the cool action choreography, the nicely lit frames and the intriguing plot, and on the other hand shaking your head in disbelief at everything else.

It is terribly written - Johnny and Tanya are on the run, and instead of trying to call up friends and gather help, they indulge in light-hearted banter where Johnny tells Tanya that she isn't a three-day hook-up girl but a serious-relationship girl. Then, Johnny attempts to kill a girl (Rachel, played by a clueless Mandana Karimi) by strangling her, and an hour later she falls in love with him.

Kunal Khemu is fun to watch, and appears to be in desperate need of a good script and a director who can channel his talent into something more worth his time. Vikram Bhatt has a good time in the three scenes that he appears in, and Manasi Scott as the wily antagonist makes you take notice.

But the two leading ladies compete with each other on how badly a performance can be mangled, and Zoa Morani is a clear winner. While Mandana Karimi may have the problem of not knowing the language (it's ironic that she plays an interpreter who speaks 20 languages), Morani has no such excuse, and yet can make you believe you are watching an under-rehearsed school play.

Director Shivamm Nair has worked hard on the stylising and the action sequences, but with a script so inane and dialogues so puerile, the movie loses every chance at redemption. The repetitive background score and the unimpressive songs solely add to your annoyance with the film.

Forget Johnny, it is you who has a choice to make now. And unless you are a Kunal Khemu fan, it is only your bad karma which will lead you into a hall playing Bhaag Johnny.
Share. Save. Connect.
Tweet
BHAAG JOHNNY SNAPSHOT 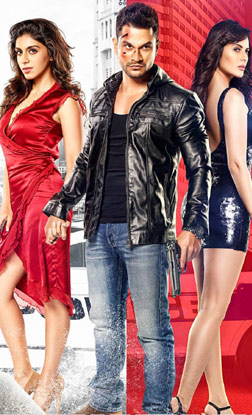 ADVERTISEMENT
This page was tagged for
Bhaag Johnny hindi movie
Bhaag Johnny reviews
release date
Kunal Khemu, Zoa Morani
theatres list
Follow @fullhyderabad
Follow fullhyd.com on
About Hyderabad
The Hyderabad Community
Improve fullhyd.com
More
Our Other Local Guides
Our other sites
© Copyright 1999-2009 LRR Technologies (Hyderabad), Pvt Ltd. All rights reserved. fullhyd, fullhyderabad, Welcome To The Neighbourhood are trademarks of LRR Technologies (Hyderabad) Pvt Ltd. The textual, graphic, audio and audiovisual material in this site is protected by copyright law. You may not copy, distribute, or use this material except as necessary for your personal, non-commercial use. Any trademarks are the properties of their respective owners. More on Hyderabad, India. Jobs in Hyderabad.