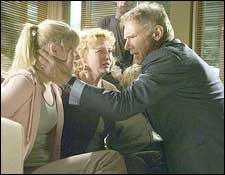 Priyanka Pulla / fullhyd.com
EDITOR RATING
5.0
Performances
Script
Music/Soundtrack
Visuals
NA
NA
NA
NA
Suggestions
Can watch again
NA
Good for kids
NA
Good for dates
NA
Wait to rent it
NA
But for Harrison Ford, who, like the buff that adds gloss, brings in class by his very presence, Firewall would have been just another ordinary kidnapping and ransom drama. It would have been another story about a threatened American cozy family unit that gets filmed ad nauseum every year.

Pre-teen son with peanut allergy and remote control car, teenage daughter with an attitude and blond bangs on her forehead, beautiful wife balancing a million chores and responsibilities with the fleetness of a circus-juggler, contented husband with enviable skills, job and car. This Christmas-card family is kidnapped, and Jack Stanfield (Harrison Ford), who is the network security expert of a major bank, is asked to hack in if he wants them to live.

This dad is pig-headedly insubordinate, though; he simply won’t go ahead and do the job straightforwardly. Like a bird slamming itself to death against the bars of its cage, Jack makes a number of ill-fated, if ingenious, attempts to break away. He is wired from tip to toe with video cameras and audio devices, yet he rises to the occasion like a kidnapping veteran, coming up with brainwaves on the fly as creatively as the participants of Whose Line Is It Away think up rhymes.

He just never gives up, and sometimes it pisses you off. They are a fighting family and keep getting thrashed for it by the villain Bill Cox (Paul Bettany) and his gang. It’s like they go through a ‘kidnapping drill’ every once in a while, along with a fire drill.

Hmmm. Well, the family behaves impeccably under the circumstances while Jack finally gives up his attempts and sets about crashing the massive security firewall he has built brick by shrewd brick.

But his company is being taken over by another, and there are more foes to reckon with than usual - a hostile Gary Mitchell (Robert Patrick) from the other bank, and even his own secretary Janet (Mary Lynn Rajskub), until she learns of the actual state of affairs. But like the brute force programs he protects his network against, he rams through everybody concertedly, breaking one defense in the building after another, goaded along by a smooth-talking Cox.

Cox is an interesting villain – he isn’t the suave, smooth operator with a psychopathic streak that stays gritted away behind his eloquence. No, he is actually as serene as a Buddhist llama. Why he would come up with such a diabolically complex plot to transfer 100 million dollars to his offshore accounts is a mystery.

Between Beth Stanfield, the wife who is also the architect of the house, and the kids, the family keeps up with its doomed escape attempts. The props used (the boy’s car remote control) are initially displayed with all the obviousness, except a ‘Given’ tag to indicate that these are the tools the family has to work with during the escape sequences.

Finally Jack gets his family back after a few gun-shots, sparring with other weapons such as fire-extinguishers, driving across deserted highways and scrambling across roof-tops. He displays as much preparedness and agility as a Navy Seal, and beside yourself, you want it explained how a visibly grizzled hacker can perform such incredible feats.

The movie ends with the family having destroyed the entire ruthless kidnapping gang, and walking up into the camera with arms around each other. Firewall really does save the best for last - it is the ending that is the most improbable, and audiences kind off snicker at each other when they realize the only the thing coming by way of an explanation is the credits.

For the tenderfoots who haven’t watched a movie with Harrison Ford as the aggressive family alpha-male, Firewall will be good fun. Others would probably be reduced to playing the guessing game and feeling repeatedly disappointed when they are right over and over again.
Share. Save. Connect.
Tweet
FIREWALL SNAPSHOT

ADVERTISEMENT
This page was tagged for
Firewall english movie
Firewall reviews
release date
Harrison Ford, Paul Bettany
theatres list
Follow @fullhyderabad
Follow fullhyd.com on
About Hyderabad
The Hyderabad Community
Improve fullhyd.com
More
Our Other Local Guides
Our other sites
© Copyright 1999-2009 LRR Technologies (Hyderabad), Pvt Ltd. All rights reserved. fullhyd, fullhyderabad, Welcome To The Neighbourhood are trademarks of LRR Technologies (Hyderabad) Pvt Ltd. The textual, graphic, audio and audiovisual material in this site is protected by copyright law. You may not copy, distribute, or use this material except as necessary for your personal, non-commercial use. Any trademarks are the properties of their respective owners. More on Hyderabad, India. Jobs in Hyderabad.