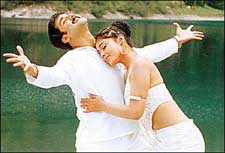 When you're judging stuff, there're chances that you keep looking at minor details and miss out on the actual fun. But the many ironies of life, after seeing people actually having unadulterated fun, you feel you're better off as a critic. Just my position at Ela Cheppanu when the guy sitting next to me (henceforth referred to as the 'guy sitting next to me') managed to change many an opinion.

The movie kicks off with a TV anchorperson announcing the businessman of the year - Shekhar (Tarun). Till this point of time, the nerdy guy sitting next to me was glued to his seat, looking like he was counting hair-strands on people's heads to calculate the number of people. But as soon as Tarun appeared, he sprang up into the air clapping his hands rapidly and making happy noises. This changed my opinion alright - he was not a man but a seal, highly trained and all (henceforth referred to as 'Sealman'). Boy, Tarun does have a huge fan base! 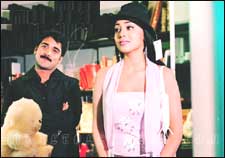 Now, Shekhar (Tarun), with his businessman of the year award, the fan base and a fast car, and runs over another businessman Abhi, who's

killed in the accident. Abhi was based in Germany and Shekhar moves to Germany to help out Abhi's family and repent for his inadvertent crime. There, he rescues Abhi's falling empire and also helps Shriya in falling in love with him. At the thought of Shriya, I was expecting Sealman to repeat his performance on her introduction too, but to my surprise found that I was howling, clapping and making noises instead of him. This clearly proves that seals are highly contagious. Also, that Shriya in her current form can make even hard logs of wood to blush. Ahem... meant that in a very nonsexual manner. Honest.

Anyways, in the movie, Shriya is crushed when Shekhar says that he had never loved her. This he does in order to save her the agony of getting married to her ex-fiancé's murderer. So she gets engaged to another business tycoon Amar since Amar promises to save the drowning business. Having enough of the proceedings on the screen already, I proceeded to see what Sealman was up to. He was whimpering and weeping uncontrollably at the emotions Shriya was going through and more for the lack of them with the new actors. His tears had flooded the seat and gave me another insight into animal kingdom - seals cry and cry a lot. Now I know why the sea tastes salty. 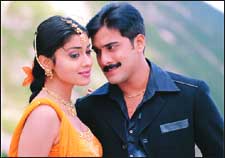 Noting this down I looked up in the nick of time to catch the ending. Shriya gets Tarun. This came as being banal to me, but my dear Sealman was ecstatic. Actually he was half up in the air, hands clapping and yelping. Having not liked the flick one bit, I wanted to really know how he enjoyed it. So I asked "Did you enjoy the movie?" In reply to that, he looked at me as if I had suddenly grown another head. "You haven't seen Tum Bin, have you?" I enquired. "Yelp. Snort snort, schmuck," he said indignantly. That was the last I had seen him. Hopefully.

ADVERTISEMENT
This page was tagged for
ela cheppanu rivew
Tarun cinema Ela cheppanu
ela cheppanu movie movie rulz
Ela cheppanu
Ela cheppanu movie
Follow @fullhyderabad
Follow fullhyd.com on
About Hyderabad
The Hyderabad Community
Improve fullhyd.com
More
Our Other Local Guides
Our other sites
© Copyright 1999-2009 LRR Technologies (Hyderabad), Pvt Ltd. All rights reserved. fullhyd, fullhyderabad, Welcome To The Neighbourhood are trademarks of LRR Technologies (Hyderabad) Pvt Ltd. The textual, graphic, audio and audiovisual material in this site is protected by copyright law. You may not copy, distribute, or use this material except as necessary for your personal, non-commercial use. Any trademarks are the properties of their respective owners. More on Hyderabad, India. Jobs in Hyderabad.