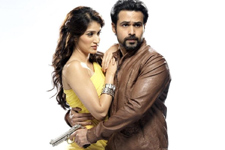 Nupur Barua / fullhyd.com
EDITOR RATING
6.0
Performances
Script
Music/Soundtrack
Visuals
6.0
4.0
4.0
5.0
Suggestions
Can watch again
No
Good for kids
No
Good for dates
Yes
Wait for OTT
No
There is plenty of baggage attached to Rush, and that itself makes it a film people are curious about. Shamim Desai, who wrote and directed the movie, passed away before he could complete it. His wife, Priyanka, waited for a while before completing and launching the movie, which was earlier titled "Raftaar 24x7". Emraan Hashmi, by now on his way to becoming the next Salman Khan (at least in terms of following) wanted an Eid release, hoping that the festive season brings him luck. And Aditya Pancholi, who makes a rare appearance every now and then in some film or the other, said in a recent interview that the fate of Rush depended on Emraan Hashmi and his Midas touch.

However, Rush may just be the hiccup that Emraan Hashmi has managed to avoid in his career all this while. Then again, maybe his golden touch will repel any sign of failure at the box office. Whatever the result, one thing is certain - this is not his best movie, a fact that is glaringly obvious after his performances in Shanghai and The Dirty Picture.

Samar Grover a.k.a. Sam (Emraan Hashmi) is a terrific reporter. He manages to interview a criminal who is on the run, and this costs him his job. He is immediately hired by Lisa Kapoor (Neha Dhupia), the sultry head of the news channel named "Crime 24". This channel is owned by Roger Khanna (Aditya Pancholi), a man who seems to have unlimited access to everything, from the personal bedrooms of politicians to the latest gadgets in espionage technology.

The ambitious and seemingly ruthless Sam fits right in. He spends more time in the shadowy corridors of crime reporting than with his bright and artistic better half, Ahana Sharma (Sagarika Ghatge). This causes a rift, of course, but Sam does not realise just how much he stands to lose till he is sucked into a world of debauchery, crime, betrayals and extreme risks. Disillusioned, endangered and on the run, Sam now has to redeem himself, and also make the world a better place.

If that plot sounded familiar, blame it on the Bhatts, who were obviously a source of inspiration for the late Shamim Desai, who seems to have used the classic Bhatt template of ambition leading to downfall. Blood Money is the first reference that comes to mind, but it is actually a more modern version of Bas Itna Sa Khwab Hai, the Abhishek Bachchan movie that had an impressionable young man, a seductress, and a psycho boss.

Indian cinema seems to be fascinated by what goes on behind closed doors in a media house. Since one does not always have access to the above, one can only exaggerate the conspiracy theories and paint an alarming picture of just how unethical media bosses can get just for an increase in viewer ratings. Just how much of this is based on actual events and research is hard to say.

Roger, for example, gets away with murder and endorsements, literally, just because he is powerful. His channel reports crime the whole day, and therefore he does the unthinkable - create crime to create news. It takes one Sam to suddenly get a burst of conscience to do something about it. The premise is a little naive that way.

What is more believable is the fact that a hardened young (!!!) man finally discovers that there is a fine line between good and evil, and that he has to choose between his scruples and unlimited power.

Emraan Hashmi sleepwalks through his part - he has done this a hundred times. His dialogue delivery is slightly stilted, probably from boredom. He is still the star of the film, though.

Neha Dhupia and Aditya Pancholi - the beauty and the beast - are a little too sincere with their roles, and end up being unintentionally funny. Sagarika Ghatge looks pretty, and is largely wasted.

Given that it is an Emraan Hashmi movie, the music is disappointing. The songs are dull and monotonous, although "Chup Chup Ke" is more in the league of hummable Emraan tunes. None of the songs are chartbusters yet, and are hopefully not a sign of times to come. Production and costume design are average, and one also has to take into consideration the fact that this movie was shot a while ago.

Rush is strictly for fans of Emraan Hashmi, unless you are curious about just how unknowingly ridiculous Aditya Pancholi can be as an OTT villain trying to be subtle. Some sequences may grab your attention for a while, but the rest of the movie is not compelling enough to enthrall the audience for two hours.
Share. Save. Connect.
Tweet
RUSH SNAPSHOT 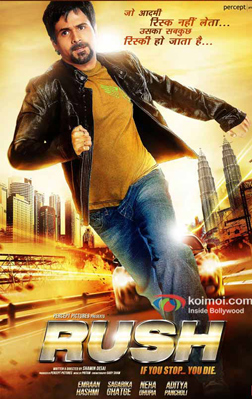 ADVERTISEMENT
This page was tagged for
Rush hindi movie
Rush reviews
release date
Emraan Hashmi, Sagarika Ghatge
theatres list
Follow @fullhyderabad
Follow fullhyd.com on
About Hyderabad
The Hyderabad Community
Improve fullhyd.com
More
Our Other Local Guides
Our other sites
© Copyright 1999-2009 LRR Technologies (Hyderabad), Pvt Ltd. All rights reserved. fullhyd, fullhyderabad, Welcome To The Neighbourhood are trademarks of LRR Technologies (Hyderabad) Pvt Ltd. The textual, graphic, audio and audiovisual material in this site is protected by copyright law. You may not copy, distribute, or use this material except as necessary for your personal, non-commercial use. Any trademarks are the properties of their respective owners. More on Hyderabad, India. Jobs in Hyderabad.