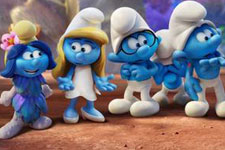 Indranil Majumdar / fullhyd.com
EDITOR RATING
8.5
Performances
Script
Music/Soundtrack
Visuals
9.0
8.0
8.0
9.0
Suggestions
Can watch again
Yes
Good for kids
Yes
Good for dates
No
Wait for OTT
No
Belgium could be considered a treasure trove of comic artists. The nation has given the world two comic virtuosos in The Adventures Of Tintin writer Hergé and Smurfs writer Peyo. Although Hergé has definitely been the more celebrated one, Peyo's work on the Smurfs is equally gorgeous. And after two average attempts at creating Peyo's Smurf-universe, Smurfs: The Lost Village finally gets it inch-perfect.

That Sony Pictures Animation has pulled a rabbit out of the hat for this film is certain. They scrapped the making of Smurfs 3 and instead laid out plans for a complete reboot. Yes, Smurfs: The Lost Village is a reboot. So people who have missed out on the first two films can walk into the theatres with absolute no qualms. A couple of things have changed, though. Firstly, the Lost Village is not a hybrid live-action / computer animation film like the earlier two, but is a completely computer-animated film. And secondly, the director isn't Raja Gosnell anymore but Kelly Asbury of Shrek 3 fame.

Smurfs: The Lost Village is sheer, unadulterated fun from frame one. The film's core deals with the existential dilemma of Smurfette (voiced by Demi Lovato), the only Smurf whose name isn't an indicator of her characterstic trait. Hefty, Clumsy and Brainy are exactly what their names suggest them to be, so then what does Smurfette mean? And the answer to that question is, by and large, what the film seeks to discover. While the extension -ette stands for the smaller version of something, it's the opposite here - everything about Smurfette is anything but small. Her heart's big and so is her penchant for adventure.

Smurfette once ventures a little too close to the wall separating the Smurf village from the Forbidden Forest. She discovers what appears to be a Smurf who she doesn't recognize. She asks herself the obvious question - is there Smurf-life beyond the wall which is yet undiscovered? The bulk of the film thereafter follows Smurfette's journey through sometimes-difficult and sometimes-beautiful terrain in search of an answer. What stands in her way though is Gargamel (voiced by Rainn Wilson), the very person who brought Smurfette into the world.

There's never anything in terms of acting in an animated film, but the voicing of each and every character is outstanding. The voice-acting by Danny Pudi (as Brainy Smurf) and Rainn Wilson (as Gargamel) is especially remarkable. And the CGI is so mind-blowingly real that you can almost believe that the Smurf-universe exists. The 3D helps, but you have to wonder how something as tough as the art of endowing animacy to characters appears so incredibly simple. The visuals are drop-dead gorgeous, and a particular scene where all the Smurfs are rafting along a narrow stream particularly stands out.

The scripting is also quite fluent, and doles out equal amounts of humour and drama throughout. Every character enhances the narrative of the plot. The film also never feels didactic, and passes on just the right amount of fun and morals to the young ones. What is remarkable is that it has enough in it for the adults to stay glued in their seats, too - something that the earlier two films did not.

The music is symbiotic with the visuals. You might end up humming the song "You Will Always Find Me In Your Heart" for quite some time after you leave the theatre.

Every year come one or two animated films that get you misty-eyed, have you uproarious and generally bring out the child in you. Smurfs: The Lost Village is clearly one of them for 2017.
Share. Save. Connect.
Tweet
SMURFS: THE LOST VILLAGE SNAPSHOT 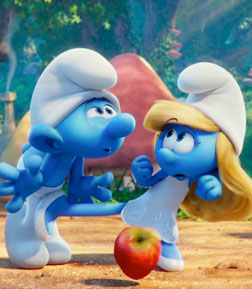 ADVERTISEMENT
This page was tagged for
Smurfs: The Lost Village english movie
Smurfs: The Lost Village reviews
release date
Demi Lovato, Mandy Patinkin
theatres list
Follow @fullhyderabad
Follow fullhyd.com on
About Hyderabad
The Hyderabad Community
Improve fullhyd.com
More
Our Other Local Guides
Our other sites
© Copyright 1999-2009 LRR Technologies (Hyderabad), Pvt Ltd. All rights reserved. fullhyd, fullhyderabad, Welcome To The Neighbourhood are trademarks of LRR Technologies (Hyderabad) Pvt Ltd. The textual, graphic, audio and audiovisual material in this site is protected by copyright law. You may not copy, distribute, or use this material except as necessary for your personal, non-commercial use. Any trademarks are the properties of their respective owners. More on Hyderabad, India. Jobs in Hyderabad.