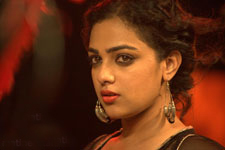 Swaroop Thotada / fullhyd.com
EDITOR RATING
3.0
Performances
Script
Music/Soundtrack
Visuals
5.0
2.0
4.0
4.0
Suggestions
Can watch again
No
Good for kids
No
Good for dates
No
Wait to rent it
Yes
Doesn't it make you a little jealous that while you are lost in your futile existential contemplations that turned you cynical and indifferent to most if not all things around you, someone can get excited about a cup of coffee? These heroine characters from Telugu movies must be truly lucky or enormously enlightened. All it takes for their mood to sky-rocket into ecstasy is the sight of a butterfly flapping its wings or a flower in the garden.

It's not condescension when we infer that it's the lack of smarts rather than a liberating enlightenment that enables them to stay so high in spirits all the time. Because we actually get to see these characters unfold later and remove any doubt.

Ghatana starts with a song where Malini (Nitya Menon) is seen juicing out all possible happiness from her ordinary life. She is a nurse in a corporate hospital and lives with her colleagues (Kovai Sarala and Anjali), and dreams of landing a job in Canada. She meets Varun (Krish J Sathaar) who works in a consultancy and helps her get a visa.

Varun is exceptionally talented in cracking poor jokes, and lucky for him, that's exactly what an airhead like Malini needs to fall head over heels in love. The love birds get into a temporary live-in relationship, and are paid occasional visits by Varun's boss Prakash (Naresh), an influential socialite.

But Prakash is a wolf in sheep's clothing. A serial and compulsive rapist and psychopath shielded by his wealth and influence, he eyes the unwary Malini. He crafts an opportune situation and pounces upon her when Varun is not around. Malini endures the brutal rape, and Varun stands by her. But there are more savage truths for Malini to confront.

Ghatana is primarily about rape. But it neither engages in a reasonable discussion, nor pulls off a gut-wrenching tale, and can't decide whether it wants to be a social commentary or a revenge drama. Even worse, it is not aware of its own dilemma. The plot meanders for too long and gives you a soporific romance between the terribly boring lead pair. Then, the story destines Malini to be a victim, but the writing didn't think any further. Thus, these non-layered characters suffer from the plot's inaction and the director's ineptitude. And in its desperation to engage, the film then toggles between pity party and torture porn.

Indeed, for too long, the bad guys reign. And the villains are not charismatic masterminds either. And for a film that intends to plunge into revenge mode, this one is not clever enough to craft the plot to accumulate tension or to sketch out characters that draw in any emotional investment. The movie ends up too sober to be a revenge drama and too intellectually crippled to be a concept film.

Nitya Menon tries hard to make the character relatable, but is let down by the poor writing. Naresh is terribly miscast and underperforms. It is supposed to be chilling while he switches from an empathetic gentleman to a neurotic maniac, but it ends up obviously staged. Kota Srinivasa Rao, Vidyullekha Raman and Krish J Sathaar shine despite the mediocre direction. While the mournful songs and soundtrack lend to the over-dramatic tone the film takes, the cinematography is dull.

Kovai Sarala literally makes the film unbearable as long as she is on the screen. She plays an aged woman who swoons over young men, and her jokes couldn't be unfunnier. She screeches, squeals and howls till you lose grip on your will to live. You really feel for the friends and family members of these writers who come up with "comedy" like this, as they have to endure it for much longer than two hours.

Many Facebook posts went viral during the Delhi-rape period proposing castration as the rightful punishment for rape. Ghatana seems to have been inspired by them, as its sensibilities don't emerge any higher than the impulsive naiveté of those posts. And sadly, it doesn't display enough creativity to cover that up.
Share. Save. Connect.
Tweet
GHATANA SNAPSHOT 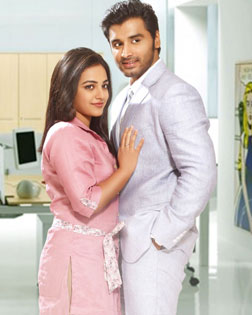 ADVERTISEMENT
This page was tagged for
Ghatana telugu movie
Ghatana reviews
release date
Nitya Menon, Naresh
theatres list
Follow @fullhyderabad
Follow fullhyd.com on
About Hyderabad
The Hyderabad Community
Improve fullhyd.com
More
Our Other Local Guides
Our other sites
© Copyright 1999-2009 LRR Technologies (Hyderabad), Pvt Ltd. All rights reserved. fullhyd, fullhyderabad, Welcome To The Neighbourhood are trademarks of LRR Technologies (Hyderabad) Pvt Ltd. The textual, graphic, audio and audiovisual material in this site is protected by copyright law. You may not copy, distribute, or use this material except as necessary for your personal, non-commercial use. Any trademarks are the properties of their respective owners. More on Hyderabad, India. Jobs in Hyderabad.