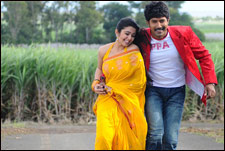 Harika Vankadara / fullhyd.com
EDITOR RATING
2.0
Performances
Script
Music/Soundtrack
Visuals
5.0
2.0
5.0
7.0
Suggestions
Can watch again
No
Good for kids
Yes
Good for dates
No
Wait to rent it
Yes
Mayagadu is a stillborn. The movie was clearly released a decade too late, while zillions of movies meanwhile have milked dry the prototype of its plot.

Leela Krishna (Venu) is a lawyer who works for a lawyer-friend Viswanath (Ali), in his make-shift office under a tree outside the High Court. Leela, who is on the lookout for a shortcut to wealth, zeroes in on Vandana (Charmee), the younger daughter of a renowned criminal lawyer Chidambaram (Sayaji Shinde).

Leela initially tries to woo Chidambaram's older, married daughter Spandana (Satya Krishna), who is a caricature of all those educated fools who do not acknowledge the fact that the true character of every person is hidden beneath multiple layers of pretense.

Having realized his mistake regarding Spandana's married status, Leela seamlessly shifts to the younger sister. Vandana is a representative of that section of confident girls who believe that they cannot be messed with but are trapped by con men just as easily as the next girl. Leela lays down a couple of under-handed schemes, and Vandana marries him.

However, to Leela's shock, Vandana opts to distance herself from the luxurious lifestyle that she is accustomed to, as she believes her husband is a "man of substance" who won't accept any money from her father. Leela grudgingly shifts back to the little room he shares with Ali.

Now, Leela's reputation for being as slippery as an eel lands him in the gaze of crooks, and it is his dealings with this gang that reveal his true colors to Vandana, who now wants to divorce him. A far-fetched climax involving a medical breakthrough (i.e., an injection that makes people speak nothing but the truth) reunites the two.

Mayagadu shows the High Court as the workplace of men who can be swayed by the silliest of reasons. For example, Leela gains Chidambaram's attention and impresses Spandana by proving that a certain child in front of them is indeed a major, by convincing the judge that leap years have a role to play in calculating the girl's age.

Like mothers experimenting with garnish to make staple food palatable for fussy kids, the director tries to inject a vial of humor to the movie. The dialogues themselves are banal, and it is indeed wondrous that the lead pair, Venu and Charmee, makes them slightly engaging. Shinde and Ravi Babu (who plays the role of Spandana's husband) pitch in to help the flick.

Chakri's music saves the film from falling flat on its face. The 6 songs are the only note-worthy parts of the movie. The location manager for the songs deserves special mention, as stunning locales make the numbers seem even better than they are.

Given that Mayagadu was shelved for more than 3 years, you'd think the producer would have done his homework before finally releasing it. Unfortunately, the timing of the film's release could not have been worse, with 5 better movies having been released this weekend.
Share. Save. Connect.
Tweet
MAYAGADU SNAPSHOT

ADVERTISEMENT
This page was tagged for
mayagadu movie
Mayagadu
Mayagadu telugu movie
Mayagadu reviews
release date
Follow @fullhyderabad
Follow fullhyd.com on
About Hyderabad
The Hyderabad Community
Improve fullhyd.com
More
Our Other Local Guides
Our other sites
© Copyright 1999-2009 LRR Technologies (Hyderabad), Pvt Ltd. All rights reserved. fullhyd, fullhyderabad, Welcome To The Neighbourhood are trademarks of LRR Technologies (Hyderabad) Pvt Ltd. The textual, graphic, audio and audiovisual material in this site is protected by copyright law. You may not copy, distribute, or use this material except as necessary for your personal, non-commercial use. Any trademarks are the properties of their respective owners. More on Hyderabad, India. Jobs in Hyderabad.