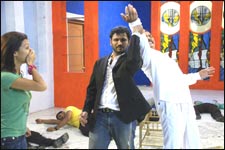 Deepa Garimella / fullhyd.com
EDITOR RATING
1.0
Performances
Script
Music/Soundtrack
Visuals
1.0
1.0
1.0
1.0
Suggestions
Can watch again
No
Good for kids
No
Good for dates
No
Wait for OTT
No
Jagan Naidu (Narendra Naidu) is an enterprising, US-returned, semi-formal-clad, not-properly-shaven dude. He saves a woman journo, Lekha, from being manhandled by the CM's henchmen. Since this is no mean task - he fights half of them without his sunglasses and makes Rahul Dev seem like an Oscar-winner - the boss of her TV channel sees CM material in this boy. He appeals to him to lead his crusade against the evil CM, Chandrasekhar Reddy (Ashish Vidyarthi), and tells him that he has a file detailing his atrocities.

Jagan is impressed with the idea. But he also has to keep sneaking off to meet this girl (Sunaina Fernandez) who is always accompanied by some mean-looking thugs. When this girl confesses that she's the CM's daughter, and that they're all her bodyguards, Jagan is not one bit intimidated. This is because he has been trained by the US Special Force. Seriously. We'll excuse you while you puke.

Chandrasekhar Reddy makes use of the services of an influential goon, Goud (Pradeep Rawat), to get hold of the bothersome file, but with no success. Meanwhile, the anti-CM party is gaining momentum, with people from all over ready to plunge in - labour union leaders, real estate dealers, Mahila Mandal leaderesses, minority leaders, hospital owners etc. Jagan starts feeding the poor everyday (on his porch), and spouts forth his noble ideas on how he will uplift the downtrodden, improve literacy, build houses for the poor, and ensure affordable medical care, and find time to become Vishnu's 11th avatar. Predictably, in the 2009 elections, Jagan becomes CM and gets his girl, too, and they both happily go speed-boating on the Hussain Sagar.

Nene Mukhyamantrinaite is an extraordinarily awful film. The whole anti-CM schtick, with almost-real names, the Rayalaseema accent, and other direct references, falls flat on its face. The direction is lousy, there seem to have been no retakes ever, the dialogues are unbelievably amateurish, and the protagonist has plain messed up what could have been a mildly tolerable B-grade flick.

Narendra Naidu, the hero, has directed this film. This resolves the question of where the director was when this monstrosity was being shot. His acting makes all the extras look charismatic, and his lines, which he looks like he comes up with on the spot, make a Standard I school play seem like a Shyam Benegal project. This film even has a very visibly embarrassed Sonu Sood playing Naren, the CM's son. Ashish Vidyarthi, Sunil, Pradeep Rawat and Jayaprakash Reddy - whatever were they too doing here?

The entire affair seems to have been shot in a few days, covering major Hyderabadi landmarks, with the feel of a home-video lazily put together. The background score is a loop of rap rip-offs.

In sum, this is something that, if you watch, you'd hardly call a movie. You'd most likely call a shrink.
Share. Save. Connect.
Tweet
NENE MUKHYAMANTRI AITHE SNAPSHOT

ADVERTISEMENT
This page was tagged for
nene mukhyamantri review 123telugu
Nene Mukyamantri
nene mukhyamantri review
nene mukhyamantri
nenae mukya mantri movie review
Follow @fullhyderabad
Follow fullhyd.com on
About Hyderabad
The Hyderabad Community
Improve fullhyd.com
More
Our Other Local Guides
Our other sites
© Copyright 1999-2009 LRR Technologies (Hyderabad), Pvt Ltd. All rights reserved. fullhyd, fullhyderabad, Welcome To The Neighbourhood are trademarks of LRR Technologies (Hyderabad) Pvt Ltd. The textual, graphic, audio and audiovisual material in this site is protected by copyright law. You may not copy, distribute, or use this material except as necessary for your personal, non-commercial use. Any trademarks are the properties of their respective owners. More on Hyderabad, India. Jobs in Hyderabad.