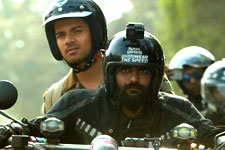 Neema Pramod / fullhyd.com
EDITOR RATING
4.5
Performances
Script
Music/Soundtrack
Visuals
6.5
4.0
6.5
5.0
Suggestions
Can watch again
No
Good for kids
Yes
Good for dates
No
Wait to rent it
Yes
For eons, Bollywood has been synonymous with musical romances - even until five years back, the moment you thought of Bollywood, images of sunflower fields and embracing lovers would flood your mind. Looks like Bollywood badly wanted an image makeover to placate its detractors. Now, instead of having Kumar Sanu and Lata Mangeshkar croon a romantic duet as Shah Rukh Khan and Kajol confess their love for each other, we have Jana Gana Mana / Vande Maataram / Saare Jahan Se play in the background alongside a waving Indian tricolor flag as Akshay Kumar / John Abraham / Vicky Kaushal gives a rousing speech on desh bhakti to those on-screen and off-screen. And now with Satellite Shankar, Sooraj Pancholi too gets on the bandwagon.

KPG Shankar (Sooraj Pancholi) is the most-loved soldier of his battalion. No, not just because he is the hero of the film, but because he has the unique power to teleport people to wherever they wish with his peculiar device that has Lord Shiva painted on it. Not just teleport someone, he can even appropriate another person's identity, with his mannerisms and language changing to become exactly like those of that person. The secret? He can "catch the feelings" of others - whatever that means. It is this ability of his that earns him the nickname Satellite Shankar.

After an injury, Shankar is asked to rest for eight days. He, however, decides to use the time to visit his mother (Sohaila Kapur) in his hometown, Pollachi. However, his journey from one end of India to the other is constantly interrupted by people who need his help for various things - catching a train, delivering packages, saving lives and so on - which he is unable to refuse. As Shankar begins to doubt the probability of his getting home and then back to the base camp on time, he unknowingly becomes a hero for the entire country through his bravery and selflessness, all of which was being carefully documented by a spirited vlogger named Meera (Palomi Ghosh).

Despite all its failings, it must be said that Satellite Shankar has its heart in the right place. Though the movie attributes Shankar's selflessness to the greatness of Indian soldiers, it comes across more as a character trait than something that was written in the script, just because he is the "hero". He is not that hero who dives in to help with no thought given to himself. He hesitates a bit, sometimes even outright refuses, but then ends up reluctantly giving in as he just cannot say no, even though the disruption annoys him. This makes Shankar feel more real in the otherwise illogical universe of the movie.

Another thing to be appreciated about the movie is its mostly accurate portrayal of South Indians (Tamilians in this case). Shankar is a Tamilian, and usually in mainstream films this becomes the starting point for stereotypical jokes. But thankfully, Satellite Shankar does not go that way. Shankar being a Tamilian is just a part of his identity, and the film has smatterings of Tamil throughout to add to its authenticity - especially in the interactions between Shankar and his potential love interest (Pramila, played by Megha Akash). And when two Tamilians are shown speaking in Hindi, a valid reason is given for it, too. It also helps the movie greatly to have an actual Tamil girl play a Tamilian, unlike Alia Bhatt in 2 States or Parineeti Chopra in Meri Pyaari Bindu.

The problem with Satellite Shankar is that it does not know when to stop. The film has many tender moments, like the one with Shankar carrying an old woman to a train, or the one where he teleports a Punjabi soldier in his battalion to his sister's wedding. But the movie milks these moments too hard and for too long until they suck the last drop of juice from them, eventually making the film feel like a TV serial.

The first half, despite the overdose of drama, does move at a decent pace. But after a while it becomes tiring to see the man get delayed again and again, the circumstances for which begin to feel increasingly contrived. The subdued patriotism which made the first half bearable turns into full-fledged chest-thumping nationalism as the movie progresses, and the film starts throwing more and more glorious quotes about the greatness of men in uniform, especially the members of the armed forces.

The purpose of Satellite Shankar's existence is undoubtedly to serve as a showreel for Sooraj Pancholi - he acts, dances, fights, mimics, and gives rousing speeches - and he is earnest. He has surely improved by leaps and bounds from his disastrous debut in Hero four years back, but he still has a long way to go to be able to carry an entire film on his shoulders.

Thankfully, here the supporting actors help a great deal in shouldering at least part of that weight. Palomi Ghosh as the enthusiastic vlogger gets a little overbearing at times, but holds her own throughout. But it is Megha Akash who almost walks away with the film with the few scenes she gets. She is spunky and confident, and toggles between Tamil and Hindi very naturally. She shares a comfortable chemistry with Pancholi, which makes you wish there were more scenes of them together.

The visual effects are fine, save for the bullets in the first firing scene, and the cinematography by Jitan Harmeet Singh is appreciable, too. However, the movie could have been a lot tighter - certain portions were dragged out for way longer than necessary, leaving you fidgeting in your seat. The songs, however, are peppy and pleasing to the ears, even if Sandeep Shorodkar's score can get loud and jarring at times.

Despite the overdose of jingoism and melodrama, Satellite Shankar does entertain in parts. Had its orbit been more clearly defined, it could have made for a pleasant old-fashioned masala flick. But now, this satellite just wanders aimlessly in space.
Share. Save. Connect.
Tweet
SATELLITE SHANKAR SNAPSHOT 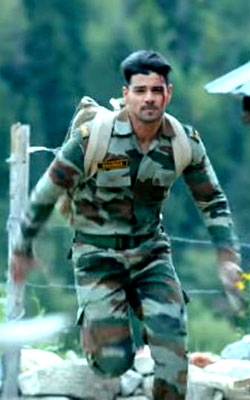