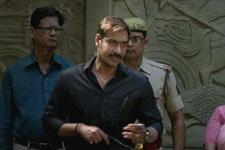 T J Reddy / fullhyd.com
EDITOR RATING
5.0
Performances
Script
Music/Soundtrack
Visuals
5.0
5.0
4.0
7.0
Suggestions
Can watch again
No
Good for kids
No
Good for dates
No
Wait for OTT
Yes
Ah, what can we say about Raid and movies of this ilk? Films like these work at any given time, in any given place and with any given government because let's face it, no matter who you support, the system is the one that's corrupt. Most people are fine until the fire gets anywhere close to them.

However, a man who doesn't share these views is Amay Patnaik (a stone-faced Ajay Devgn). With a stiff-upper-lip, even stiffer shoulders, and 49 transfers under his very visible belt, Patnaik is an income tax Deputy Commissioner who conducts a raid on the not-so-humble abode of Rameshwar Singh (Saurabh Shukla) aka Tauji, based on a tip.

The film zeroes in on this event and stays there through the course of its runtime. With no elaborate sets, costumes or bombast, Raid sells itself as a procedural and a game of wits between an unstoppable force (Patnaik) and an immovable object (Tauji).

This choice gave the film two lines to proceed along (which is very meta when you consider its lead actors). One is the no-nonsense Ajay Devgn route and the other is the super-subversive and extremely enjoyable Saurabh Shukla route. The movie is a concoction of these two extremes, with more than a dash of Bollywood thrown into the mix.

Ajay Devgn is the Randy Orton of Bollywood. For those of you who haven't heard about Orton, he is a WWE superstar whose in-ring style and character are described as methodical and calculated by some but as boring and repetitive by others. The same can be said of most of Devgn's performances, and the one in Raid is no different. There is a stoicity to his manner that is uniquely his but is also severely detrimental to many a film that he is a part of. And a movie such as this set in a single location and with no bells and whistles (apart from the ludicrous twists it throws out in the second half) needed a magnetic lead actor to hold an audience's attention.

Devgn parrots many a line Ravi Teja spouted in Vikramarkudu but lacks the manic energy the latter brings to the table, and Raid suffers because of it. Intensity and lack of palpable action are not the same thing. You may have seen the same complaints levied against a few Mahesh Babu and Ram Charan performances from time to time because the filmmakers helming their projects may have mistaken a perpetually bored expression with simmering intensity.

Trying his damndest to offset this is the ever-welcome Saurabh Shukla. Shukla manages to find the humanity in a sea of chest-thumping dialogue baazi that was prevalent in the '80s (this film's setting). His understanding of how the medium of film has changed over his long and storied career helps him create a fullfledged character out of thin air, and gives the movie the shot in the arm it needs to not be another Baadshaho. The colourful family he is afforded and his reaction to their antics add a bit of much-needed levity to the film.

You can find a wee bit more comedy by laughing at a character in this film. Ileana D'Cruz, who plays Amay's wife Malini, said in an interview that her character was not a typical '80s heroine who just made food for everyone. That's right - she doesn't just make the food, she hand-delivers it to Patnaik as he conducts his raids. Her character and the relationship she shares with her husband are comic gold, and the fact that the film plays their relationship out without a tinge of irony makes it all the more humorous.

What aren't funny, however, are the many duets the duo share that destroy the pace of the film. Maverick composer Amit Trivedi and upcoming talent Tanishk Bagchi are tasked with adding impetus to a movie that shows its hand far too soon. Suffices to say, their over the top compositions and an undercooked romantic thread don't make for a blissful soundscape.

That being said, Raj Kumar Gupta's film is elegantly shot. Even though it lacks the striking visual grammar of his debut Aamir, Raid hits the notes it needs to without skipping a beat. Patnaik's pronounced heroism and Tauji's underplayed exasperation at his family's ineptitude are cleverly captured under a current of one-upsmanship.

The film has oodles of skill and craft scattered around that are begging to be admired. But it lets itself down time and time again owing to its plotting and central performance. Every patriotic humdinger needs a central figure an audience feels that they can walk with. Raid's Amay Patnaik is no such figure. The movie neither shows the futility of a lone man fighting against a broken system a la Newton nor has the sweet wish-fulfillment of a man overturning the establishment a la Oke Okkadu.

This is Bajirao Singham's bureaucratic adventures and all the soul-crushing mediocrity that comes with that.
Share. Save. Connect.
Tweet
RAID SNAPSHOT 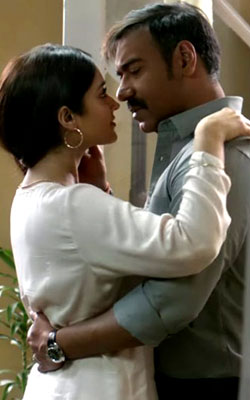 Email:ra3830126@gmail.com
whatsapp:08095536788
singhprashast2011 on 21st Apr 2018, 8:30pm | Permalink
The screenplay of RAID is full of surprises from the very beginning. The film starts off quite well and thanks to the powerful editing apart from the engaging screenplay, one hour passes and you're unable to realize it actually has, especially when the interval card hits you. The entire pre-interval sequence is excellently written, masterfully crafted and good enough to raise the expectations towards the second half.

RAID works for many reasons. One, the intriguing screenplay. The efforts of Raj Kumar Gupta and Ritesh Shah (director and writer respectively) can be seen in every frame and the research they've done seems to come out well in the movie. Second, the powerful and intense confrontation between Amay and Tauji (played by the very skilled Ajay Devgn and Saurabh Shukla respectively). The dialogues which come out like powerful chess moves, ooze a sense of intelligence the characters have. Third, the technical aspects. The cinematography is quite effective and it's a film one should better watch on the best and biggest possible screen. Fourth, the humour. It's very natural and actually hilarious. Fifth, the action. Apart from being a crime thriller, it's also a different action film. The action has been very neatly done and given the fact that there's rarely any bloodshed, you should not mind taking kids as well.

Performance wise too, RAID comes out as a winner all the way. Ajay Devgn and Saurabh Shukla are simply the strength of this film, while Ileana too comes out with a decent act. The supporting actors too, especially "Lallan" and "Amma" impress big time. The latter's comic timing works as a major plus for the film as well.

As for the music, Black Jama Hai is not just the best one out of all, but also the most well-timed song as compared to the others, which too are good but not well-timed of course. The visuals are a treat to watch and the sound effects too are impressive. Background score also is quite effective.

To make it easier, RAID is an excellent action-crime thriller which deserves to be seen not just for the above-mentioned reasons but also for the tribute and honour it gives to the unsung heroes who don't always come in uniform.

ADVERTISEMENT
This page was tagged for
Raid hindi movie
Raid reviews
release date
Ajay Devgn, Ileana D'Cruz
theatres list
Follow @fullhyderabad
Follow fullhyd.com on
About Hyderabad
The Hyderabad Community
Improve fullhyd.com
More
Our Other Local Guides
Our other sites
© Copyright 1999-2009 LRR Technologies (Hyderabad), Pvt Ltd. All rights reserved. fullhyd, fullhyderabad, Welcome To The Neighbourhood are trademarks of LRR Technologies (Hyderabad) Pvt Ltd. The textual, graphic, audio and audiovisual material in this site is protected by copyright law. You may not copy, distribute, or use this material except as necessary for your personal, non-commercial use. Any trademarks are the properties of their respective owners. More on Hyderabad, India. Jobs in Hyderabad.