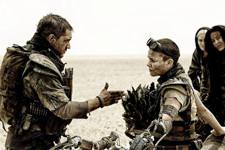 Nupur Barua / fullhyd.com
EDITOR RATING
8.0
Performances
Script
Music/Soundtrack
Visuals
7.0
8.0
6.0
8.0
Suggestions
Can watch again
Yes
Good for kids
No
Good for dates
No
Wait to rent it
No
Director George Miller first thought of a fourth film in the Mad Max franchise way back in 1998. The third movie, Mad Max Beyond Thunderdome, was released in 1985, and he thought it was time to bring to the audience yet another story set in the apocalyptic world of Max Rockatansky. However, with the 2001 World Trade Centre attacks and other issues such as wars and recessions, the project was all but abandoned. With Mel Gibson walking away from the film after various upheavals, it was thought that it would never materialise. The release of Mad Max: Fury Road has proved critics wrong, fortunately for the fans.

It is the distant future, and civilisation as we know it has collapsed. Max Rockatansky (Tom Hardy), an Australian survivor, has become a blood supplier to the perennially ill Nux (Nicholas Hoult). Nux is a part of a cult army, the War Boys, led by the evil King Immortan Joe (Hugh Keays-Byrne). Max is essentially a prisoner of this cult gang. In the meantime, Joe's Five Wives, who were specifically selected for breeding, have disappeared, and he suspects his trusted Lieutenant, Impersonator Furiosa (Charlize Theron), who has driven away in one of the cult's armoured cars.

Joe pursues Furiosa and the War Rig with a vengeance. Since Nux has to go along, Max is made to accompany him. As they chase Furiosa, the War Boys go through some rough terrain and lose some of their own, because the former refuses to give in without a fight. Max somehow ends up with Furiosa and the Five Wives, and he is made to see the sense in her decision to escape to the Green Place of her childhood, where she believes that they can lead better lives.

Joe, however, is not about to give up, even as Max and Furiosa speed through Biker gang territory. Will they ever make it to Green Place, or should they, as Max believes, go back to Joe's kingdom and make that a better place?

Mad Max: Fury Road has a simple story. The entire movie is a chase, and the realisation that memories are not always permanent in nature. Furiosa runs towards a Utopia that she believes exists, while Max tries to battle his demons of losing his wife and son. Nux, too, becomes confused, because he does not know what they are all fighting for any more. The central theme is the idea that human beings can be bought as resources, and therefore wars are inevitable. Max is an asset, but he is dispensable, as are the Wives.

Then again, one cannot blame the lack of morals in this world. Every human being has to do what he or she can, to survive. The dystopian era they live in makes it difficult for them to be really human, but they have to save themselves, as a species. And of course, the strongest will not only survive, but also rule and dictate. The movie brings to your attention, time and again, the helplessness of a world such as this. The characters are quirky and abnormal, and the action is definitely over the top. However, the screenplay is tight, and never wavers from what it is trying to portray. The dialogues are snarled out, and the humour is pretty irrelevant and grim, but the script keeps you glued. In fact, there are times when you may forget to breathe.

Charlize Theron makes a wonderful Furiosa. In one word, she is badass. She has no qualms in fighting dirty, and her character goes through various shades - vulnerable, strong, compassionate, scared, violent, and weak. Her chemistry with Tom Hardy is palpable, even though there is no romance here. Like Theron, Hardy, too, portrays various facets of the man known as Mad Max, and even Mel Gibson could not have pulled off those expressions. He is savage, menacing, and kind. The supporting cast, especially Nicholas Hoult, is terrific.

Unattractive and gritty, the dirty world of Mad Max comes to life through the production design of the movie. For fans of the franchise, the world is familiar, yet dirtier (literally), and that makes you feel the frustration and angst of the characters. The never-ending deserts, the dangerous swamps, and the dilapidated remains of civilisation make the pointlessness of the existence of the characters even more pronounced. The costumes, similarly, are dusty and minimal, with some fancy head and face gear thrown in for effect. They enhance the personalities of the characters.

The film is visually stunning because of its cinematography. Granted, there is plenty of CGI, but the cinematographer goes wild with the never-ending chases and the action sequences. Every scene is guaranteed to leave you breathless, and you will note the lack of unnecessary angles and shots. Gripping though the script is, it is the camera work that makes the apocalyptic world too real. The hard rock music puts you in the mood for some heavy violence, and the editing is slick.

You do not have to be a fan of the Mad Max franchise to appreciate the movie. Although references to Max's past are subtly inserted here and there, Mad Max: Fury Road can be viewed as a standalone film that makes you believe that the Apocalypse, when, and not if, it comes, will make us lose our humanity.

Be prepared to be blown away, and for the good news - Hardy has signed up for four movies in this franchise. So yes, sequels will occur.
Share. Save. Connect.
Tweet
MAD MAX: FURY ROAD... SNAPSHOT
MAD MAX: FURY ROAD (3D) SNAPSHOT 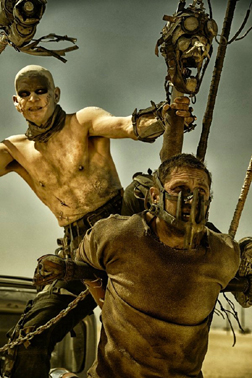 ADVERTISEMENT
This page was tagged for
Mad Max: Fury Road (3D) english movie
Mad Max: Fury Road (3D) reviews
release date
Tom Hardy, Charlize Theron
theatres list
Follow @fullhyderabad
Follow fullhyd.com on
About Hyderabad
The Hyderabad Community
Improve fullhyd.com
More
Our Other Local Guides
Our other sites
© Copyright 1999-2009 LRR Technologies (Hyderabad), Pvt Ltd. All rights reserved. fullhyd, fullhyderabad, Welcome To The Neighbourhood are trademarks of LRR Technologies (Hyderabad) Pvt Ltd. The textual, graphic, audio and audiovisual material in this site is protected by copyright law. You may not copy, distribute, or use this material except as necessary for your personal, non-commercial use. Any trademarks are the properties of their respective owners. More on Hyderabad, India. Jobs in Hyderabad.