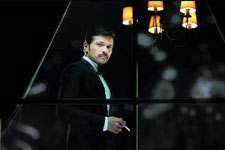 Kritika Deval / fullhyd.com
EDITOR RATING
2.5
Performances
Script
Music/Soundtrack
Visuals
2.0
2.5
4.0
6.5
Suggestions
Can watch again
No
Good for kids
No
Good for dates
No
Wait to rent it
No
Oh, how we wish there was a way everyone with a hankering to see their magnificent selves on celluloid could do so without inflicting their "xpozays" on the unwitting public, or, even more importantly, the hapless film reviewer. And how we wish for a world where star sons got to produce "blockbusters" that only busted their own residential blocks, and Himmesh Reshammiya could pimp out to his heart's content so he could show off only to his friends.

Sadly, though, those are just wishes, and reality is The Xpose.

Let's get the story done with, first. Ravi Kumar (Himmesh Reshammiya) is a South-Indian film star making it big in Bollywood in the '60s. Zara Fernandez (Sonali Raut) is found dead at the foot of a building, and it is not suicide. We now meet a plethora of characters, none of who is in the least bit interesting, but all of who are supposed to be (because they're from that mad, bad era of Bollywood), and one of whom is the murderer.

In all of this whodunnitting, Ravi Kumar finds time to romance starlet Chandni (Zoya Afroz), throwing up lines that would bring out the latent humility in Rajnikanth, Shah Rukh, Salman, Mammootty, and every megastar you can think of. Also, he dresses like Gatsby on qualuudes, because apparently that way stardom lies.

Notice how we aren't really talking about anybody else in the film. The reason is that Reshammiyya wants the film to be more about him than the film itself. Too bad he doesn't really give us anything worth watching, unlike the Gatsbys and the Belforts of the world of cinema. Instead, we, for some reason that probably can only be justified in his own alternate consciousness, get something that seems part Om Shanti Om, part ye olde Don, and part The Dirty Picture - all set in the sensory overload that is the Gatsby universe.

Sure, the others are there. Irrfan Khan shows up for a bit, but you barely even register him. The girls, Zoya Afroz and Sonali Raut, seem to have too much makeup for them to be able to move their faces (or maybe they don't quite realize that they actually can). And then, there is Yo Yo Honey Singh - nuff said.

The sad part is, this movie could've been a riot - the nice kind, instead of the kind where an incensed crowd wants to vent. There is just enough whack to the plot that, if there had been more of it than Reshammiya's awkward attempts at romancing, you would've gotten a film that you could engage in, even if it is at that superficial "that sort of amuses me" kind of way.

The music is a mockery of everything that makes Bollywood music popular - a constant assault on the senses under the guise of hipness. The cinematography and the editing are actually pretty cool, if somewhat overdone at times.

In all, the only reason you should actually pay to watch this one is if you're high, have a designated driver, and want a cool place to wait it out. You'll laugh, but maybe not for reasons that the makers intended.
Share. Save. Connect.
Tweet
THE XPOSE SNAPSHOT 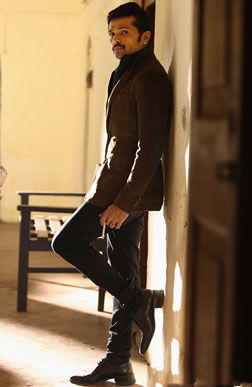 ADVERTISEMENT
This page was tagged for
The Xpose hindi movie
The Xpose reviews
release date
Himesh Reshammiya, Irrfan Khan
theatres list
Follow @fullhyderabad
Follow fullhyd.com on
About Hyderabad
The Hyderabad Community
Improve fullhyd.com
More
Our Other Local Guides
Our other sites
© Copyright 1999-2009 LRR Technologies (Hyderabad), Pvt Ltd. All rights reserved. fullhyd, fullhyderabad, Welcome To The Neighbourhood are trademarks of LRR Technologies (Hyderabad) Pvt Ltd. The textual, graphic, audio and audiovisual material in this site is protected by copyright law. You may not copy, distribute, or use this material except as necessary for your personal, non-commercial use. Any trademarks are the properties of their respective owners. More on Hyderabad, India. Jobs in Hyderabad.