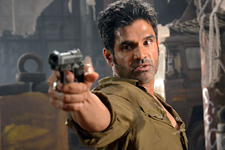 Nupur Barua / fullhyd.com
EDITOR RATING
3.0
Performances
Script
Music/Soundtrack
Visuals
5.0
3.0
4.0
6.0
Suggestions
Can watch again
No
Good for kids
No
Good for dates
No
Wait for OTT
No
Contrary to popular belief, the title of the movie, Enemmy, has more to do with the initials of the first names of the characters than the director's fascination with numerology. In case you have not watched the promos and YouTube videos, you should. You will know what the title means.

Of course, the word is a pun on the word "enemy", as in foe/rival. The theme chorus - "Within, without... within my skin, the enemy" - makes that abundantly clear, just when you begin to wonder who the enemy is. You may argue that your enemy is the director Ashu Trikha, for making you sit through his film, but then, that is debatable.

The story goes like this. A robbery on the Raigad highway leaves the underworld don Mukhtar (Zakir Hussain) furious with the driver of the cash van that is now empty. He suspects his rival, Pandey (Sharat Saxena), of having a hand in this heist, and the city is suddenly subjected to a series of gang wars.

RG (Akshay Kapoor), a young politician who may become the next Prime Minister, calls the state CM and asks him to put an end to the mayhem, and so Mukhtar is thrown into jail.

The movie has all the ingredients of a gangster film - item songs, bars, menacing goons, cops, corrupt politicians, the works - but it fails to hold your interest. The screenplay is filled with dialogues that seem to be borrowed from movies of the 1980s - nobody speaks a straight line. Innuendos and threats are rampant in every speech, giving you a headache about half an hour into the movie.

Eklavya has a wife who is suffering a cancer relapse, a young daughter, and an aging father who was in the police force, too. Naeem's wife is pregnant, and Eric's widowed sister and nephew are kidnapped at some point. In short, their lives are not easy, but the plot ignores these humane issues and concentrates on trivialities such as their "tashan".

The track on possible betrayal is underplayed, and thriller buffs will recognise the superficiality in the way key issues are dealt with, making Enemmy a rather wannabe movie.

What exactly Yugantar is capable of is not clear, but it is understood that he is the cool dude who will solve everything. Whenever he visits a scene of crime, he has a visual of the events that took place on that site. Does he have a special gift? It would seem so, because he solves mysteries and finds clues in empty spaces.

Most of the movie has high-speed sequences - in which every movement is suddenly slowed down to emphasise on details of the fight or the walk or even an expression. This gets repetitive and tiring after a point.

It does not help that the film has more than its fair share of action. To make matters worse, some sequences are shown all over again as flashback, in black and white.

Mahaakshay Chakraborty (Mimoh) is now a more restrained actor. There is not much that can be done about his voice, and he does look like a more beefed-up version of Himesh Reshamiya, but he has his expressions sorted in this movie.

His father, Mithun Chakraborty, is a far superior actor, of course, but his indulgence for his son is apparent on screen, even though they play opponents in the film.

Suniel Shetty is his usual self, neither adding to the character, nor distracting from it. He performs well in emotional scenes.

Johnny Lever seems uncomfortable with the lack of slapstick humour in his dialogues, but he lives up to expectations. The stars of this movie are Kay Kay Menon and Zakir Hussain. Both deliver applause-worthy performances, despite the confusion in the script.

Besides "Bheege Naina", all the songs are forgettable (except "Within, Without" - that will ring in your ears like an echo that refuses to go away, days after you survive the movie).

Production design is shoddy - for example, when Yugantar investigates the four police officers, he is shown photographs that are screen-captures from scenes that have just taken place, including the one of Eklavya consoling his ill wife. The less said about the costumes, the better, but it is surprising that none of the police officers wears their uniform.

Watching Enemmy ('E for Eklavya, N for Naeem, E for Eric, M for Madhav, M for Mukhtar, Y, Y, for Yugantar') is a challenge. Unless you are curious about the fact that Johny Lever has made it to the poster as a hero. High time, we say, but watch at your own risk.
Share. Save. Connect.
Tweet
ENEMY SNAPSHOT 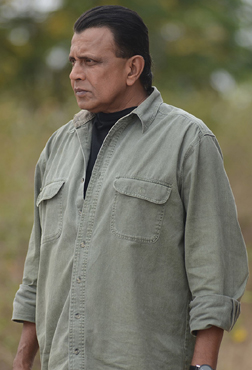 ADVERTISEMENT
This page was tagged for
enermy hindi film
enemy movie explained in hindi
enemy movie in hindi
Enemy hindi movie
Enemy reviews
Follow @fullhyderabad
Follow fullhyd.com on
About Hyderabad
The Hyderabad Community
Improve fullhyd.com
More
Our Other Local Guides
Our other sites
© Copyright 1999-2009 LRR Technologies (Hyderabad), Pvt Ltd. All rights reserved. fullhyd, fullhyderabad, Welcome To The Neighbourhood are trademarks of LRR Technologies (Hyderabad) Pvt Ltd. The textual, graphic, audio and audiovisual material in this site is protected by copyright law. You may not copy, distribute, or use this material except as necessary for your personal, non-commercial use. Any trademarks are the properties of their respective owners. More on Hyderabad, India. Jobs in Hyderabad.