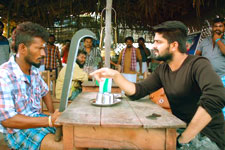 T J Reddy / fullhyd.com
EDITOR RATING
6.0
Performances
Script
Music/Soundtrack
Visuals
7.0
6.0
4.0
5.0
Suggestions
Can watch again
Yes
Good for kids
Yes
Good for dates
Yes
Wait for OTT
No
Chalo is a simplistic movie about a simplistic goofball told in a simplistic way peppered with some simplistic jokes, and we'll simply stop saying the word simplistic so many times as even our simplistic brains understand that you simply can't take this anymore. Writer/director Venku Kudumula introduces you to Chalo's simplistic protagonist Hari (Naga Shourya) by doubling down on the latter's singular character trait; Hari loves fights. He loves getting into fisticuffs so much so that he doesn't mind being on both the giving and receiving ends of physical punishment.

Inspired by old man Rajinikanth's parenting techniques from Arunachalam, Hari's father decides to ship his son off to Tirupuram - a rural town which has the border between Tamil Nadu and Andhra Pradesh running right through it. Because of the town's unique makeup, it is a haven for violent communal disputes between the Tamil and Telugu contingents. Hari's father wants his only son to get into as many fights as humanly possible in this volatile environment as he hopes that it would help create a dislike of said violent lifestyle in his son's mind.

Why he can't have his son learn a martial art and represent India in the Olympics or in the Octagon? I don't know the answer to that question - and neither do his dad and nor the movie.

After the aforementioned setup, the movie's plot follows Hari's attempts at trying to unite the two sections of the town as he, the Telugu guy, falls in love with Karthika (Rashmika Mandanna), the Tamil girl.

Chalo is a veritable smorgasbord of self-deprecating humour, inane setups, hilarious payoffs and lazy braindead storytelling at its finest. It looks at its audience, smirks, and says, "If I'm going to be stupid, I'll be KING STUPID." And runs with that statement from minute 1 to minute 135. And to its credit, I haven't laughed out loud at a Telugu movie to this extent since Pelli Choopulu.

Many a big-budget star-powered Telugu movie needs to take a look at Chalo for a few pointers to how to use a wafer-thin plot and a wealth of character actors to its advantage. The movie masks its deficiencies in the logic and story departments by having its characters laugh at its glaring flaws which in turn gives the audiences free reign to enjoy themselves at the movie's expense. The film is so self-aware that it drags out specific plot points (mysteries) to a comical degree while priming the audiences not to expect much from the ultimate payoff. It is a risky act to pull off, and the movie almost comes off scot-free but for a few errors in some key areas.

Chalo's primary drawback is its lead couple. Naga Shourya and Rashmika Mandanna might look the parts at being your everyday couple next door, but they can do precious little in terms of getting an audience to sympathize or empathize with their plights. Naga Shourya's inexperience comes through when he is forced to emote non-verbally, and Rashmika Mandanna's Karthika seems to be a clear rip-off of her character from her Kannada debut in Kirik Party (right down to her glasses). However, unlike her male counterpart, Mandanna drops the ball with her verbal acting whereas her quieter moments offer more in terms of making her character likeable. The awkward line-readings and unsubtle emoting while spouting out said lines don't help her make a strong Tollywood debut.

But credit where credit is due, as the movie redeems itself by getting the most out of the talents of its character and comedy actor brigade. These men and women have not been given material this good since Srinu Vaitla's heyday, and they do make hay within these two and half hours of sunshine. Satya, Posani Krishna Murali and especially Venella Kishore bring their unique brands of physical comedy, comic timing and dialogue delivery to their characters.

These actors and their quirk-fuelled characters are so engaging that you'd be asking for spin-offs with them in the lead while simultaneously forgetting about how bang average the score, music and sound design are. While the actors go above the call of the duty to help the audiences get their money's worth, the film's technical staff seem to have put themselves on autopilot. Every tender scene between boy and girl is shot with soft focus and every scene with a bad guy is rendered with an uncomfortable close-up. These shot choices reek of overuse. And when the movie tries to break convention, it rips off shots from Kingsman hoping no one will notice.

In all honesty, however, not many in the audiences seemed to be noticing the flaws that seemed so glaring to us, as they were too busy laughing their ribs off. It's like the movie knew it had unlikable leads, a hackneyed storyline which was the unholy love child of Brindavanam, Maryada Ramanna and Ready, and some lapses in logic so blatant that the theory of creationism seemed plausible by comparison. However, unlike many a commercial movie, it never tries to talk down to you from its flawed moral high ground. On the contrary, it sits next to you, accepts your flaws as a nitpicky moviegoer and invites you to accept its flaws as it is nothing more than a pure popcorn entertainer.
Share. Save. Connect.
Tweet
CHALO SNAPSHOT 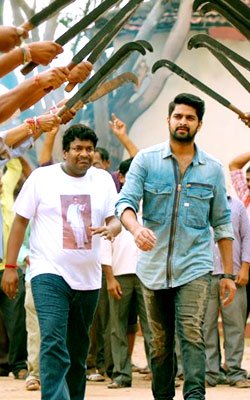 See Chalo full details
CHALO USER REVIEWS
1 - 4 OF 4 COMMENTS
POSITIVE  |  NEGATIVE |  NEWEST  |  OLDEST  |  MOST HELPFUL  |  LEAST HELPFUL
USER RATING
9.0
1 USER
Performances
Script
Music/Soundtrack
Visuals
NA
NA
NA
NA
Can watch again - NA
Good for kids - NA
Good for dates - NA
Wait for OTT - NA
The Common Movie Goer on 11th Feb 2018, 10:32am | Permalink
Man o man, all political correctness aside, this movie was hilarious. I agree with everything in the review except for the rating. Sure, from a film analyst / critic's point of view, it deserves a 6, but from a common movie goer's point of view I would say it's an 8 or 9, maybe even a 10. It's pure unadulterated entertainment designed to keep you engaged. Satya was a riot, and so was Rashmika. Naga Shourya is a lovable guy, and he lived up to it.

I can't believe the other reviews (read biased websites) bashed it so much!

Oh, yeah, I also strongly disagree with the leads being unlikeable. They are very beautiful people, and both of them can actually emote. Lower your standards, TJ - I am sure you are a very handsome man (read in a light tone).

Definitely would recommend if you love peak V V Vinayak and Srinu Vaitla type entertainment.
RATING
9
TJ Reddy on 11th Feb 2018, 8:41pm | Permalink
I do understand that TCMG. But I have to weigh in every aspect and see if the whole is better than the sum of its parts. Even though I've always maintained an opinion that a "score" is reductive, I have to keep my opinion honest. The simple fact is, I haven't thought much about Chalo since I saw it on the day. It hasn't stayed with me even as a comedy. But, it was great fun as long as it lasted.

I felt the PC police needed to take a chill pill with this because the film mocks its own non-PCness. The final reveal is a slap in the face of how ridiculous every single one of our communal disputes is. The film is more self-aware than people give it credit for.

The film actually plays with the fact the fact that its leads are complete self-serving dicks and not much else. I love the self-awareness there too. But the fact is Rashmika is still quite green as an actress and the troupe of comic talent around Naga Shourya help his performance to a high degree. When they aren't around him, he isn't as engaging.

I agree with you on the last point there and I did mention it in the review too. This was what Srinu Vaitla used to offer up in spades before his films started repeating themselves. It is pure mindless, self-aware enjoyment.

ADVERTISEMENT
This page was tagged for
Chalo telugu movie
Chalo reviews
release date
Naga Shourya, Rashmika Mandanna
theatres list
Follow @fullhyderabad
Follow fullhyd.com on
About Hyderabad
The Hyderabad Community
Improve fullhyd.com
More
Our Other Local Guides
Our other sites
© Copyright 1999-2009 LRR Technologies (Hyderabad), Pvt Ltd. All rights reserved. fullhyd, fullhyderabad, Welcome To The Neighbourhood are trademarks of LRR Technologies (Hyderabad) Pvt Ltd. The textual, graphic, audio and audiovisual material in this site is protected by copyright law. You may not copy, distribute, or use this material except as necessary for your personal, non-commercial use. Any trademarks are the properties of their respective owners. More on Hyderabad, India. Jobs in Hyderabad.