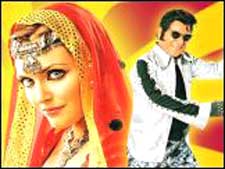 Deepa Menon / fullhyd.com
EDITOR RATING
6.0
Performances
Script
Music/Soundtrack
Visuals
NA
NA
NA
NA
Suggestions
Can watch again
NA
Good for kids
NA
Good for dates
NA
Wait to rent it
NA
King Of Bollywood is meant to take you on a rollicking behind-the-curtains journey to the heart of the world's busiest film industry. Find out what makes it tick-tock. Get acquainted with the huge and fragile egos that make it go. See how deep the pancake is slapped on. And discover how little of filmmaking is really about making the film.

Given all that, then, it's ironic to see how closely King Of Bollywood conforms to the very norms it ridicules. It's a funny movie, lots of people will tell you that. But the great opportunity with humor is that when people open their mouth to laugh, you can slip the truth right in. Even George Bernard Shaw is with us on this one, especially since those are his words. But King Of Bollywood misses that window. The real tragedy, however, is that we don't even think they were aiming for it. This is a tickle-fest, pure and simple.

Crystal Chaurasia (the ex-chubby Sophie Dahl), a delectable kichdi of Indian and British origin, lands up in Mumbai to do a documentary on the fading star of Bollywood, Karan Kumar (Om Puri), who defies age by simply denying it. He's so totally past his golden prime that the nubile damsels who once might have thrown their underwear at him now wear diapers. But Karan Kumar is still at it, with his jet-black wig, his blaring costumes and his elusive sex appeal, which compels him to sleep with every heroine he signs on.

Bollywood is famous for the fantasies it indulges, but even the dream factory draws the line at Karan Kumar making a comeback ("But where had I ever gone?"). So he must do it himself, and hence his latest stomach-churning 'hit picture', Dhak Dhak Karta Hai Father India Ka Dil, featuring the great KK in a triple-role. Crystal tags along at the shooting of this movie and pieces together the picture of a has-been star, with the help of a ubiquitous cameraman and several hidden cameras.

We encounter the embarrassed son of the King, Rahul (Diwaker Pundir), his beautiful, alcoholic once-actress wife, Mandira (a waxen Kavita Kapoor), his right-hand man of many resources, Rattan aka Ratty (Manoj Pahwa), and his obsequious entourage, that includes a palm-top-wielding guruji. This last character doesn't speak but makes all the important decisions based on the position of the planets, which even deign to assign camera angles.

The clowns march in at word go, and every little joke strolling down Funny Avenue is explored; you have the starry tantrums, fickle financiers all of whom want a favor in return, the politics of landing an award, and in the midst of it all, a tired prune of a one-time superstar, trying desperately to keep his wig on. You're detached from and amused by this sad, old person and his grand illusions all through, but there's one moment, when the stardust turns to dust, that you will feel sorry for him. Not for too long, though.

If KOB was trying to hold up a reflection, maybe it wasn't such a great idea to use corny trick mirrors. Or was it? Ah, we don't know. People were laughing fit to have a bellyache. But just please, let's not call this a satire. It plays too desperately to the galleries. Let's just call it what it is: an episode of MTV's Fully Faltoo turned into a full-length feature.
Share. Save. Connect.
Tweet
KING OF BOLLYWOOD SNAPSHOT

ADVERTISEMENT
This page was tagged for
King Of Bollywood english movie
King Of Bollywood reviews
release date
Om Puri, Sophie Dahl
theatres list
Follow @fullhyderabad
Follow fullhyd.com on
About Hyderabad
The Hyderabad Community
Improve fullhyd.com
More
Our Other Local Guides
Our other sites
© Copyright 1999-2009 LRR Technologies (Hyderabad), Pvt Ltd. All rights reserved. fullhyd, fullhyderabad, Welcome To The Neighbourhood are trademarks of LRR Technologies (Hyderabad) Pvt Ltd. The textual, graphic, audio and audiovisual material in this site is protected by copyright law. You may not copy, distribute, or use this material except as necessary for your personal, non-commercial use. Any trademarks are the properties of their respective owners. More on Hyderabad, India. Jobs in Hyderabad.