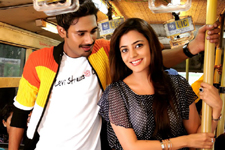 Kritika Deval / fullhyd.com
EDITOR RATING
4.5
Performances
Script
Music/Soundtrack
Visuals
4.0
5.5
4.0
4.0
Suggestions
Can watch again
No
Good for kids
No
Good for dates
Yes
Wait to rent it
Yes
There's something about Varun Sandesh that makes not-quite-famous directors see him as the perfect candidate to play the woman-trap. Something that we, at fullhyd.com, are missing. Perhaps it's that vacuous look in his eyes. Or that smile that suggests that he has cute pocket monkeys jumping about where his brain should be. Maybe, just maybe, it's that winning drawl with which he effectively murders the Telugu language whenever he opens his mouth. Whatever it may be, it falls to us to watch these portrayals and let you know whether or not they're worth the watch.

And hence, Saradaga Ammaitho, a movie about Santosh (Master Bharath, Varun Sandesh), womanizer extraordinaire who goes through life like Predator, scanning everything female and figuring out their weakness, and then moving on to the next. Just when Santosh's parents despair of ever seeing their sole progeny settled in life, in walks Geetha (Nisha Agarwal), a prickly but pretty girl who he just cannot figure out.

Because our Casanova, our Don Juan, our Eros, our (add whatever gross exaggeration for a womanizer comes to mind) simply cannot stand this, he decides to bring out his "A" game, i. e., pretend to be in love with her.

However, Geetha isn't quite through with hoops for Santosh to jump. She has him installed as the warden of a girls' hostel for 10 days, to test his devotion for her. Now that Santosh is the prey being hunted by the ever-amorous girls there, can he resist his lovely predators and discover what's truly important?

Now that we're done with making the film seem far more interesting than it is, let's get down to why it isn't. Firstly, Varun Sandesh is about as exciting as toast soaked in milk. Secondly, so is the script. Together, these elements make sure that you find it very difficult not to walk away in exasperation.

While the mountain of crude lameness that passes for humour here does carry a pebble or two of genuine wit, these are few and far between. Then too, perhaps a tad more charming an actor, like say Navdeep, could've played a large part in injecting life into the proceedings. Varun Sandesh's skinny shoulders just don't cut it.

Nisha Agarwal is lovely, and, although her chemistry with Varun Sandesh is rather awkward, shows great promise as an actor. The rest of the veteran cast, though mostly there for comic relief, do justice to roles that don't do justice to them.

The surprise the cast throws up is Mumaith Khan. Wipe off the ugly make up, take the focus off of the Alpine cleavage, and you have a more-than-decent actor with plenty of spunk.

Lest we forget, Master Bharath, as Santosh's 10-year-old alter ego, outperforms the whole lot. He's one of the few reasons you'll find yourself giggling in the movie hall.

The music and the production values are just mediocre, as is the rest of the movie. If you pee a lot, you're in luck. Just walk out every time a song begins. Or pretty much whenever you want. 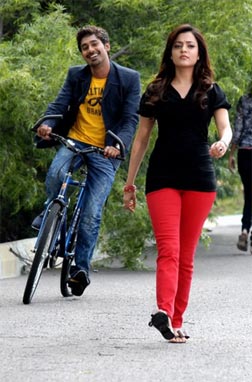 ADVERTISEMENT
This page was tagged for
Saradaga Ammaitho telugu movie
Saradaga Ammaitho reviews
release date
Varun Sandesh, Nisha Agarwal
theatres list
Follow @fullhyderabad
Follow fullhyd.com on
About Hyderabad
The Hyderabad Community
Improve fullhyd.com
More
Our Other Local Guides
Our other sites
© Copyright 1999-2009 LRR Technologies (Hyderabad), Pvt Ltd. All rights reserved. fullhyd, fullhyderabad, Welcome To The Neighbourhood are trademarks of LRR Technologies (Hyderabad) Pvt Ltd. The textual, graphic, audio and audiovisual material in this site is protected by copyright law. You may not copy, distribute, or use this material except as necessary for your personal, non-commercial use. Any trademarks are the properties of their respective owners. More on Hyderabad, India. Jobs in Hyderabad.