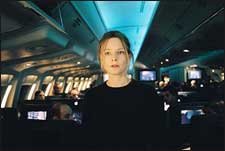 Priyanka Pulla / fullhyd.com
EDITOR RATING
7.0
Performances
Script
Music/Soundtrack
Visuals
NA
NA
NA
NA
Suggestions
Can watch again
NA
Good for kids
NA
Good for dates
NA
Wait to rent it
NA
Flightplan lasts as long as an Indian domestic flight. Before you know it, the suspense is out, the defending champion is proclaimed villain, and the heroine is walking in a halo of flight lights with the prize in her arms. The story, on the whole, converges to its denouement with such a sharp slope, you are quite stunned that it's all over so quickly.

But that's when the rescuers come in - a small clutch of well-chosen, all pervading elements that completely save the day. Jodie Foster, Sean Bean, Peter Sarsgaard and, most of all, the in-flight setting - a motley bunch of passengers suspended 37,000 feet in the air, encapsulated hermetically in 5-star luxury: the perfect suspense setting from the word go. The constant, shrill screech of the air-drag becomes the sound of high tension, and the eerieness is atmospheric.

Into this steps Kyle (Foster), with her 6-year-old daughter Julia (Marlene Lawston). This traumatized jet-propulsion engineer's husband has committed suicide by jumping off a building, and she is flying his coffin to Berlin from New York, to bury him. Julia completes the setting as the cute, lisping, bonnie little girl who would make the perfect whyfor in a kidnapping drama. She is vulnerable, inexplicably scared of flying in this plane, and is obviously going to create very little trouble when she is kidnapped, leaving the spotlight on Foster.

The "Amazonian mother saving wide-eyed child" act is always compelling, and something we might never tire of. Especially if the mother is Foster, looking apologetically jittery as she hunts for her child. As she goes haywire one minute and gets back in control the next, her restiveness itself adds a whirr to the scenes and charges them up.

Well, Kyle and Julia decide to take a nap on the plane, and when Kyle awakens, Julia has disappeared. She rouses everybody on the plane, from passengers to the flight captain (Sean Bean), and soon a full-fledged search is on. But guess what - a re-look at the flight manifest reveals that there was never any passenger called Julia on the flight, and when Kyle tries frantically to protest, she discovers she doesn't have the girl's boarding pass anymore. To top it all, the flight attendants insist they haven't seen any child accompanying Kyle as she got in. The captain checks back further and informs her with regret, that her daughter had died along with her husband when he committed suicide.

Kyle is at her wits' end and does not know whether to believe the evidence, or her own memory of all that happened. Meanwhile, Air Marshall Carson (Peter Sarsgaard) is escorting her around, trying to help her get to the bottom of the mystery.

The movie does a crescendo of tension against James Horner's background score - from one whammy to another. It's nice. It's been a long while since a movie has been able to keep up the tautness this consistently, and therefore you begin to expect something totally awesome to explain it - psychological, extra-terrestrial, anything, but definitely not the daringly obvious.

To be fair, when the resolution does come, it is not daringly obvious, but then it is not awesome either. Perhaps Flightplan gives away a bit initially in Kyle's speculation of the weird happenings. Or perhaps the actual villain and his plan just do not seem scary enough. Whatever it is, the highest points of this movie are certainly not at the end. The buildup of the suspense is the reward, but the breakdown is hardly a justification.

Overall, Flightplan is very worth a catch. We like that they tried, and we like that they mostly succeeded at giving the suspense genre a shot in the arm. Foster is impeccable, and you might want to watch the movie only, only and only for her. In every scene that she is present, there is often no one else visible, so powerfully does she get across to you. And she is around in the entire movie. So that is a treat to watch.

Catch this movie with a group of friends and don't hesitate to plan around it - believe us, it is that kind. Not a flick casually passing by, but a big time screening.
Share. Save. Connect.
Tweet
FLIGHTPLAN SNAPSHOT

ADVERTISEMENT
This page was tagged for
Flightplan english movie
Flightplan reviews
release date
Jodie Foster, Sean Bean
theatres list
Follow @fullhyderabad
Follow fullhyd.com on
About Hyderabad
The Hyderabad Community
Improve fullhyd.com
More
Our Other Local Guides
Our other sites
© Copyright 1999-2009 LRR Technologies (Hyderabad), Pvt Ltd. All rights reserved. fullhyd, fullhyderabad, Welcome To The Neighbourhood are trademarks of LRR Technologies (Hyderabad) Pvt Ltd. The textual, graphic, audio and audiovisual material in this site is protected by copyright law. You may not copy, distribute, or use this material except as necessary for your personal, non-commercial use. Any trademarks are the properties of their respective owners. More on Hyderabad, India. Jobs in Hyderabad.