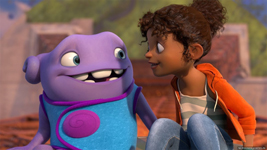 Kritika Deval / fullhyd.com
EDITOR RATING
5.5
Performances
Script
Music/Soundtrack
Visuals
6.0
4.5
6.0
7.5
Suggestions
Can watch again
No
Good for kids
Yes
Good for dates
No
Wait to rent it
Yes
There are some animated films like this and this, which are nuanced and intelligent and make statements on the human condition while pushing the boundaries of storytelling via computer graphics. They are also thoroughly adorable. And then there is Home, which chooses to fulfil the latter requirement while giving the most perfunctory of lip services to the former.

Home is about an alien race called the Boov, a race of little purple six-legged life actuaries who will not act unless the action entails less than 50% risk of failure. They have to look for a new home, and after much searching, zero in on this little blue rock we call home, and start to take over.

They "humanely" decide that the best way to go about it is to relocate all of humanity to Australia, because they don't realise that the only reason why humans ended up on a piece of land where nature itself hates them is because they didn't have a choice.

So, that happens, and one little Boov called Oh (Jim Parsons), who is something of a non-conformist, decides that he wants a party at his new home, and sends out invites via the highly discriminatory method known as "hitting reply all". This alerts another race called the Gorgs, who happen to be the enemies of the Boov, to their presence on Earth.

Oh has been declared an outcast by Captain Smek (Steve Martin), the Boov's mean-spirited leader, and is roaming around the streets of the now desolate city in search of food, when he runs into Tip (Rihanna) and her pet cat Pig (the funnest set of words ever written), a little girl who has been torn for her mother, and has little love for the Boov. Now, it's upto Oh and Tip to find Tip's mother, clear Oh's name, and save the planet from annihilation by Gorgs.

And, no. This convolutedly slapstick plot does not have nuance injected into it via dialogue either, which, while funny at times, is firmly in the "for toddlers" category. Home is neither original, nor particularly subversive. It is in fact often a little boring simply because there is too much happening for too little reason. Its sole saving grace is that it panders, very effectively, to very little children, who are sure to get a kick out of the goof-dorable characters and the catchphrases. And, of course, the Disney-Pixar style soundtrack that is sung almost entirely by Rihanna.

The animation is quite nice, and, especially in the case of the Boov, very expressive. In the kind of film where the computer takes on the bigger share of acting, Jim Parsons and Rihanna get their personalities through quite well. Parsons, especially, is a treat to... erm... listen to, for fans of The Big Bang Theory, as the socially awkward yet inquisitive Oh seems very like his beloved character from that show. Rihanna as Tip is sassy and fun, as well. The rest of the cast does its thing, with only Steve Martin's Captain Smek getting to have something of a personality.

Animated film aficionados often take crap for liking "kids" films from those too dead inside to acknowledge the child within them. Home, however, is one film where you should probably listen to the zombie hordes, and watch only if you have little monsters of your own that need to be pacified.
Share. Save. Connect.
Tweet
HOME (3D) SNAPSHOT 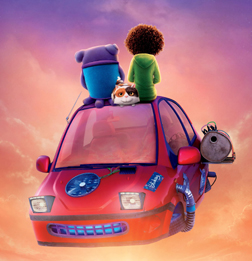 ADVERTISEMENT
This page was tagged for
Home (3D) english movie
Home (3D) reviews
release date
Jim Parsons, Rihanna
theatres list
Follow @fullhyderabad
Follow fullhyd.com on
About Hyderabad
The Hyderabad Community
Improve fullhyd.com
More
Our Other Local Guides
Our other sites
© Copyright 1999-2009 LRR Technologies (Hyderabad), Pvt Ltd. All rights reserved. fullhyd, fullhyderabad, Welcome To The Neighbourhood are trademarks of LRR Technologies (Hyderabad) Pvt Ltd. The textual, graphic, audio and audiovisual material in this site is protected by copyright law. You may not copy, distribute, or use this material except as necessary for your personal, non-commercial use. Any trademarks are the properties of their respective owners. More on Hyderabad, India. Jobs in Hyderabad.