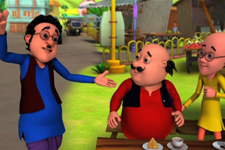 Jaiwantika Dutta-Dhupkar / fullhyd.com
EDITOR RATING
4.0
Performances
Script
Music/Soundtrack
Visuals
4.0
6.0
4.0
5.0
Suggestions
Can watch again
No
Good for kids
No
Good for dates
No
Wait to rent it
Yes
Is it appalling that one of the most violent movies released this week isn't A-rated but is actually a "children's film"? Motu Patlu - King Of Kings is a mind-numbing tirade shockingly meant to cater to children. It's unamusing and sadly unentertaining, and the animation leaves much to be desired.

Guddu, an endearing circus lion, and vegetarian at that, seeks to escape his life of captivity and finds helpmates in heroes Motu and Patlu who understand animal-speak because of a wonderful invention by their friend, Dr. Jhataka. Together with their friends Chingam, Ghaseta and the aforementioned Dr. Jhataka, the duo head out to let Guddu out in to the wild, Born-Free style.

The Samaritans camp overnight in a dense jungle enroute to the sanctuary which Guddu is to call his home. This jungle is ruled by a noble lion, Simha, who protects the jungle and all the animals from wicked poachers. Simha is hero-worshipped by all the animals, but he's cruelly bumped off one day, and the animals find themselves leader-less and at the mercy of the poachers who have plans to mine gold in the forest. Motu and Patlu get Guddu to fill in for the lost king Simha, and after a terrible, long-drawn battle, Guddu discovers his inner lion, and the animals find a new saviour.

Motu Patlu - King Of Kings is the kind of film you wouldn't have wanted to watch at age 5, or age 10. It completely underestimates children's intelligence and thinks it can get away with low-quality junk, because its target audience is in school. And if you are an animal lover you'll have more than that in your crosshairs. For a film with so many animals, its approach towards them is rather crass - it has elephants swallowing coconuts and shooting them out through their trunks in the battle scene, birds being used as torches and so on. It gets its cheap thrills out of tossing little creatures around, and depicts animals like mere machinery while the humans sit around giving orders.

Much of the storyline has to do with gold-digging, and how the animals are risking their lives to protect their territory. Motu Patlu could thus well be a tribal dilemma and human rights issue, badly scripted and camouflaged as an animal story - but even so, it hasn't been effectively told. In any case, humanizing animals, or in this case going one step further and mechanizing them, is never a good idea.

Technically, the VFX in Motu Patlu is better than the writing, and the music is better than the VFX. So you can suffer silently through the film, but do wake up during the songs, which is when the kids watching the film with you in the theatre suddenly begin to get excited as well.

Motu Patlu - King of Kings is too violent to be a children's film. Quite seriously, it could do with an A-rating.
Share. Save. Connect.
Tweet
MOTU PATLU - KING... SNAPSHOT
MOTU PATLU - KING OF KINGS SNAPSHOT 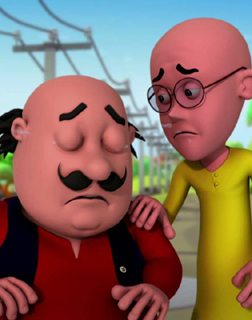 ADVERTISEMENT
This page was tagged for
Motu Patlu - King of Kings
Motu Patlu
Motu Patlu Ramanthapur
Motu Patlu: King of Kings
Motu Patlu - King of Kings hindi movie
Follow @fullhyderabad
Follow fullhyd.com on
About Hyderabad
The Hyderabad Community
Improve fullhyd.com
More
Our Other Local Guides
Our other sites
© Copyright 1999-2009 LRR Technologies (Hyderabad), Pvt Ltd. All rights reserved. fullhyd, fullhyderabad, Welcome To The Neighbourhood are trademarks of LRR Technologies (Hyderabad) Pvt Ltd. The textual, graphic, audio and audiovisual material in this site is protected by copyright law. You may not copy, distribute, or use this material except as necessary for your personal, non-commercial use. Any trademarks are the properties of their respective owners. More on Hyderabad, India. Jobs in Hyderabad.