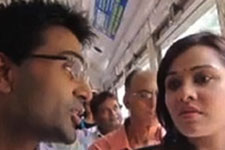 Ravi Kandala / fullhyd.com
EDITOR RATING
2.0
Performances
Script
Music/Soundtrack
Visuals
2.0
1.0
1.0
1.0
Suggestions
Can watch again
No
Good for kids
No
Good for dates
No
Wait for OTT
No
Stalking is defined as unwanted or obsessive attention by an individual or group toward another person. If we tweak this slightly and instead choose to define it as unwanted or obsessive attention by an individual towards a group of people, the definition would fit Ram Gopal Varma perfectly. In spite of being rejected by audiences repeatedly and being told that his movies are unwanted, the man continues to stalk innocent audiences with bizarre experiments. He directs some of them, and his proteges direct the others, but make no mistake, his stamp is all over the movies that come from his stable.

Psycho, the latest film from the "maverick's" stables, has story and screenplay by RGV, and is directed by yet another of his proteges, Kishore Bhargava (these proteges seem as numerous as his films!). The film will surely give you a headache due to the rogue cinematography if not due to its plot.

Aah, the plot! Let's get to that now.

The film is yet another of those stories that RGV has written based on a true story - read: yet another of those shocking newspaper headlines that RGV decided to exploit for his own benefit. Psycho is about the trouble that a girl faces due to a stalker who tells her he loves her and is ready to kill people or even the girl herself for the sake of that love.

The girl in question is Meera (Priyanka/ Nisha Kothari - whatever she calls herself now), and she is being stalked by Nikhil (Raj Shroff), a clearly deranged man who is obsessed with her.

Nikhil introduces himself as a friend of her colleague in a bus, and tries to ingratiate himself into her life, but his psychotic behavior soon freaks Meera out, and she starts trying to avoid him altogether. How Nikhil slowly but surely makes life hell for her and the consequences form the remaining part of the movie.

Now, getting to the rogue camera work that was panned unanimously in RGV's Department, the technique is going to be panned with equal intensity once again. With his movies releasing only in certain non-descript theatres, the experience of seeing the camera move around incessantly along with the characters is disorienting and headache-inducing.

The plot, written by Ram Gopal Varma himself, is based on a true incident, and it does show the kind of trauma that a girl goes through due to a stalker, but the ending is clearly bizarre. When you are moved by a social incident and are trying to write a script that depicts it, the least you could do is propose a solution of some sort, or at least leave an open ending that will provoke people to think. By giving the story a cinematic conclusion, RGV proves to be just another man in the crowd trying to exploit the situation. What is the difference between this man and Kanti Shah, a Bollywood C-grade filmmaker who is making a film titled "Ek Ek Ka Kaat Doongi" based on the Delhi rape case?

The plot has absolutely no frills, and is taut, to the point of being claustrophobic. The director copies RGV's work completely, and has absolutely no originality. He could have had RGV direct it and could have continued to be the assistant director (in case he was one earlier) and it would have made not an ounce of a difference.

The running time is just about 90 minutes, and the entire film is clearly dubbed from Hindi, with not even an attempt at portraying some amount of nativity, or any attempt to match lip movements or the ilk. The actors appear and sound as natural as those from the dubbed TV shopping ads.

By the end of movie, you are left wondering what good RGV is. How different is he from all those who claim to be inspired by reality and use rape scenes in their films for providing titillation? After Not A Love Story and Psycho, his claims of being inspired by a true incident are clearly just that - claims. His actual aim seems to be fulfilling his voyeuristic and stalker-inspired ambitions.
Share. Save. Connect.
Tweet
RGV'S PSYCHO SNAPSHOT 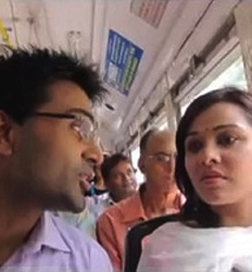 ADVERTISEMENT
This page was tagged for
RGV's Psycho telugu movie
RGV's Psycho reviews
release date
Raj Shroff, Nisha Kothari
theatres list
Follow @fullhyderabad
Follow fullhyd.com on
About Hyderabad
The Hyderabad Community
Improve fullhyd.com
More
Our Other Local Guides
Our other sites
© Copyright 1999-2009 LRR Technologies (Hyderabad), Pvt Ltd. All rights reserved. fullhyd, fullhyderabad, Welcome To The Neighbourhood are trademarks of LRR Technologies (Hyderabad) Pvt Ltd. The textual, graphic, audio and audiovisual material in this site is protected by copyright law. You may not copy, distribute, or use this material except as necessary for your personal, non-commercial use. Any trademarks are the properties of their respective owners. More on Hyderabad, India. Jobs in Hyderabad.