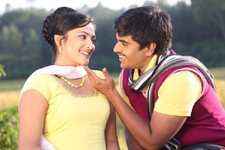 Ravi Kandala / fullhyd.com
EDITOR RATING
1.0
Performances
Script
Music/Soundtrack
Visuals
2.0
1.0
1.0
1.0
Suggestions
Can watch again
No
Good for kids
No
Good for dates
No
Wait to rent it
No
Producer / director Maruthi is the one to blame here. Though he is in no way connected to this movie, two of his earlier deeds have paved the way for a movie like Galata to release.

1. He introduced Sri in his movie Ee Rojullo, which was a runaway hit and is helping Sri get films
2. He introduced the trend of these low-budget entertainers with a heavy dose of double meaning dialogues. Galata stars Sri and has a good dose of those double-meaning dialogues, but is neither entertaining nor does it stand a chance of becoming a success

Galata has one of the most disjointed plots ever. Coming from people like us who've braved movies like Gatham and Waiting For You, that is a serious complaint.

The film starts off with the hero Chitti (Sri) leaving for Hyderabad for find himself a Telugu girl who he can marry. It then moves to Hyderabad and shows us the heroine Andaal (Haripriya), who leads a carefree existence in Hyderabad.

She is supposedly a student of Sri Harsha Institute of Technology (that's SHIT - believe us, this is used in the film). Andaal goes to a mall, bumps into a vagabond, takes him aside as if she's ready to have "fun", has her girl-pals burst into the scene dressed in some weird uniforms, takes money from the guy, completes her shopping with that money and bursts into a song copied shamelessly from Lenka's "Everything At Once", dressed in everything from lungis to turkey towels.

The next scene cuts to the Chief Minister of the state, played by JP, watching a news report about 30 persons being killed due to waste from a pharma factory, owned by Home Minister Peddireddi (Sai Kumar), being discharged into the river. JP appoints a one-man commission lead by Jayachandra (Banerjee) to conduct an inquiry. Sai Kumar, meanwhile, walks around in dark glasses spouting stupid lines in his much-recognized tone.

Peddireddi promptly kidnaps Jayachandra's daughter and threatens to kill her unless he is acquitted. Somewhere in this mess, Chitti meets Andaal, and it turns out that Andaal is related to Jayachandra, and to keep her happy, Chitti ends up rescuing Jayachadra's daughter with the help of an honest police office played by Nagababu, and all ends well. And before we forget, Ali has a supposed comedy track in the movie that made us tear our hair out (the next time we get an unsolicited call from Dr. Batra's, the salesgirl is sure to get one customer).

The film is an absolute mess with no logic or sequence or flow. The Home Minister supposedly keeps the kidnap victim right in his house. Two old women gain access to take photographs in the home minister's house by telling a cock-and-bull story to his security detail. The hero jumps into the Home Minister's compound like it's some boys hostel. We could go on and on, but allow us to stop by saying that the entire movie feels like it is strung together from random scenes shot on location with no script.

The acting, but for Banerjee and Sai Kumar, is deplorable. Sri doesn't have the personality or the talent yet to enact a lead role. Haripriya, who you might remember from Pilla Zamindar, perhaps suits the Kannada industry (where she's from) better. It is quite difficult to fathom why comedians like Ali accept such terrible roles.

Sunil Kashyap, who apparently "scored" the music, needs to look within - apart from copying and destroying Lenka's most famous single, he also has the worst remix of Nuvvu Naa Mundunte, Krishna's hit song from Gudhachari 116. The remaining technical departments are as terrible, and deserve no mention at all.

It is surely the sign of a barren summer that a film like Galata releases in Sandhya 70mm. The fact is that it does not deserve a release in even Sri Mayuri.
Share. Save. Connect.
Tweet
GALATA SNAPSHOT 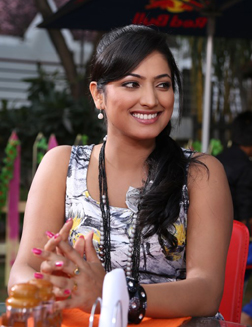 ADVERTISEMENT
This page was tagged for
Galata telugu movie
Galata reviews
release date
Srinivas (Sri), Haripriya
theatres list
Follow @fullhyderabad
Follow fullhyd.com on
About Hyderabad
The Hyderabad Community
Improve fullhyd.com
More
Our Other Local Guides
Our other sites
© Copyright 1999-2009 LRR Technologies (Hyderabad), Pvt Ltd. All rights reserved. fullhyd, fullhyderabad, Welcome To The Neighbourhood are trademarks of LRR Technologies (Hyderabad) Pvt Ltd. The textual, graphic, audio and audiovisual material in this site is protected by copyright law. You may not copy, distribute, or use this material except as necessary for your personal, non-commercial use. Any trademarks are the properties of their respective owners. More on Hyderabad, India. Jobs in Hyderabad.