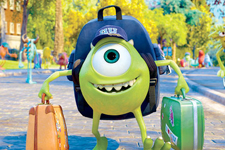 Kritika Deval / fullhyd.com
EDITOR RATING
7.0
Performances
Script
Music/Soundtrack
Visuals
7.5
7.0
7.0
8.0
Suggestions
Can watch again
Yes
Good for kids
Yes
Good for dates
Yes
Wait for OTT
No
You ever met a most unlikely pair of friends and wondered how on earth that happened? Well, the makers of Monsters Inc. anticipated just such a question about Sully and Wazowski, the protagonists of a tale where monsters scare little children, store their screams, and use them to power up their world.

You see, James "Sully" Sullivan and Michael Wazowski are professional "scarers". However, while Sully has got the whole thing down pat, what with the big hairy body and a roar that will rattle your teeth, Wazowski has a bit of a problem. You see, he's a little green ball with one eye. Would you be scared if you found that under your bed at night?

Back to the all-important question. How on earth did these two to get to be BFFs? That's where Monsters University comes in where both Sully and Wazowski are enrolled in the "scare school". And, no, they don't hit it off immediately. While Sully's the cool kid, Wazowski's the geek.

When a series of screwball events lead to both of them having to leave the program to join something called "can design", where they learn the stimulating craft of designing the cans in which the screams of human children are stored, Sully blames Wazowski, but all Wazowski wants is to get back into scare school so he can live out his childhood dream. And he needs Sully, and a bunch of sweet, but most certainly not scary, monsters to help him with it.

Monster's Inc. happened more than 10 years ago, and it enchanted everyone who beheld this zany world where monsters scare kids because that's the only way they can get by and not because they're evil. Also, human children are toxic to monsters. Didn't you know that? And while Monsters University does have its more conventional Disney moments, it's no less enchanting.

Not for a moment in this 2-hour movie will you wish yourself elsewhere, whether you're 4 or 40. (A slug monster misses a year of college because that's how much time it takes him to get from the entrance to his class. Jeez, how can you not laugh at that?). If you don't really feel as much for the characters as you did in the 2001 movie, well, that won't stop the belly laughs.

The graphics and the soundtrack, as you can only imagine, are as flawless as can be expected from the progeny of Disney and Pixar, with the voices rendering their characters to perfection. We did feel that the 3D wasn't quite necessary, though.

Also, make sure you get to the movie hall on time since you don't want to miss this most fascinating short film, called The Blue Umbrella.

Verdict: We don't really care how old you are, or how old you you think you are. You will watch Monsters University and you will like it. Or else... (sinister laughter that trails off into a silence).
Share. Save. Connect.
Tweet
MONSTERS UNIVERSITY (3D) SNAPSHOT 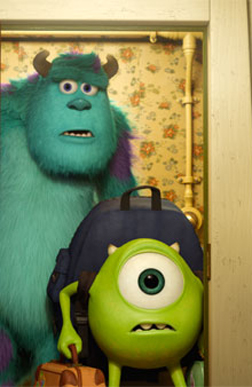 ADVERTISEMENT
This page was tagged for
Monsters University (3D) english movie
Monsters University (3D) reviews
release date
Billy Crystal, John Goodman
theatres list
Follow @fullhyderabad
Follow fullhyd.com on
About Hyderabad
The Hyderabad Community
Improve fullhyd.com
More
Our Other Local Guides
Our other sites
© Copyright 1999-2009 LRR Technologies (Hyderabad), Pvt Ltd. All rights reserved. fullhyd, fullhyderabad, Welcome To The Neighbourhood are trademarks of LRR Technologies (Hyderabad) Pvt Ltd. The textual, graphic, audio and audiovisual material in this site is protected by copyright law. You may not copy, distribute, or use this material except as necessary for your personal, non-commercial use. Any trademarks are the properties of their respective owners. More on Hyderabad, India. Jobs in Hyderabad.