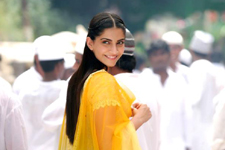 Ravi Kandala / fullhyd.com
EDITOR RATING
4.5
Performances
Script
Music/Soundtrack
Visuals
7.0
5.0
6.0
5.0
Suggestions
Can watch again
No
Good for kids
No
Good for dates
No
Wait to rent it
Yes
One of the most common faults that we find with our big budget flicks is the lack of a story. The comment most often heard in this context is that for all the money the producer spent on the movie, the least he could have done is hire a story writer. Raanjhanaa, thankfully, does not suffer from this problem - the lack of a story. What it suffers from, then, is actually its story.

The film is a long-winded love story that starts in the riotously religious streets of Benares and ends in politically motivated riots in Delhi. The plot has two focal points, Kundan Shankar (Dhanush) and Zoya Haider (Sonam Kapoor). Kundan, the son of a priest, falls madly in love with Zoya while the twain are still teenagers. He pursues Zoya relentlessly, and even cuts his wrist when she spurs him playfully. Zoya relents, but her parents pack her off to Aligarh when they learn that she is involved with a Hindu boy.

Kundan swears that he will wait for her, and he waits for 8 long years. Zoya returns as a student of JNU, but she's forgotten all about the teenage romance.

A persistent Kundan keeps at it until Zoya reveals that she is in love with a budding political leader Akram Zaidi (Abhay Deol) in Delhi. Enraged, Kundan tells her that he will get married on the same day as she will. From this point, the story takes numerous twists and turns, and ends in a completely unexpected manner.

Like we said earlier, Raanjhanaa suffers due to its screenplay, as opposed to its storyline. The plot that we've written here is just the first half. There is still a second half that goes on forever. The makers of this movie obviously hired a story-writer, but forgot to hire a screenplay writer. Raanjhanaa's meandering plot has as many twists and turns as the bylanes of Benares, and the numerous sub-plots are not neatly woven into the script.

The cryptic and nuanced dialogue is a tad difficult to follow. In addition to all these, the characters are all complexity personified.

The other problem with Raanjhanaa is that two men profess undying love for a woman who seems selfish at best and manipulative at worst. This is a woman who does not even recognise her teenage crush eight years later but will gladly take his help to spoil a proposed match and to get a match fixed in her favour. Even when she turns crusader towards the end, her personal motives seem to drive her more than the good of the people. The fact that both male leads are willing to throw away their lives for her does not really ring true.

Performance wise, Dhanush takes all his Tamil cinema sensibilities to Bollywood. The man is clearly influenced by his father-in-law, and this influence shows in his performance.

Abhay Deol is good in his cameo, but his role is just that - a small cameo. He looks slightly old, too.

Sonam Kapoor gives it all that she can, which is not too much, but is adequate. She does look breathtakingly beautiful in a few sequences, though. The supporting cast is fabulous, with Swara Bhaskar and Zeeshan Ayub standing out.

Rahman's score works very well on screen, and the songs help the story move forward. The man also tempers his western sensibilities, except for the "Dekho Na" number, and gives a proper Benares-inspired score. The production values are grand, and the cinematographer captures Benares beautifully. However, the sheen goes missing in the later part of the movie.

Raanjhanaa is a love story with flawed protagonists, that is quite difficult to absorb. Dhanush's heroics might find quite a few takers in the front benches, but the film, overall, might not go down well with our audiences.
Share. Save. Connect.
Tweet
RANJHANA SNAPSHOT 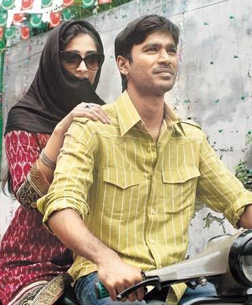 ADVERTISEMENT
This page was tagged for
raanjhanaa filmypur
Ranjhna movie download
Www Ranjhna Movie Download Com
raanjhanaa filmypur#spf=1586977712122
ranjhna full movie download
Follow @fullhyderabad
Follow fullhyd.com on
About Hyderabad
The Hyderabad Community
Improve fullhyd.com
More
Our Other Local Guides
Our other sites
© Copyright 1999-2009 LRR Technologies (Hyderabad), Pvt Ltd. All rights reserved. fullhyd, fullhyderabad, Welcome To The Neighbourhood are trademarks of LRR Technologies (Hyderabad) Pvt Ltd. The textual, graphic, audio and audiovisual material in this site is protected by copyright law. You may not copy, distribute, or use this material except as necessary for your personal, non-commercial use. Any trademarks are the properties of their respective owners. More on Hyderabad, India. Jobs in Hyderabad.