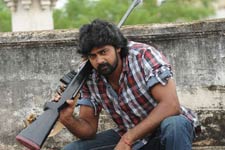 Deepa Garimella / fullhyd.com
EDITOR RATING
6.0
Performances
Script
Music/Soundtrack
Visuals
5.0
6.0
7.0
7.0
Suggestions
Can watch again
No
Good for kids
No
Good for dates
Yes
Wait for OTT
Yes
It's the little triumphs. Low-key but talented actors, dark-skinned actors and plus-sized actors - all finding highly respectable places on the canvas. Real issues being spoken about. Taagubothu Ramesh not having to act drunk to be funny.

Dalam is an interesting movie, though flawed. No prizes for guessing what it is about - a Naxalite dalam. A group of Naxalites (Nagababu, Naveen Chandra, Kishore, Dhanraj, Taagubothu Ramesh, Krishnudu and others), disillusioned with a thankless struggle and a life of violence, decide to give up arms and join the mainstream. Many of them are in the prime of their youth, and want to start afresh.

Far from being welcomed to a better life, their new chapter begins with a month's remand in jail, where the inspector (Harshavardhan) loathes Naxalites and makes no bones about the fact that he intends to finish these people off one by one.

But the cops offer them a deal. They will now do what FIRs and arrest warrants cannot do, that is, murder criminals. This arrangement creates an armed underworld gang of these very people who earlier had wanted to shun a life of violence.

The gang is led by the oddly-named Shatru (Kishore), who turns into a sort of dreaded don in the city. Yet, he's the nice guy, because the bad guy is a quasi-political leader called JK (Nasseer).

One thing leads to another, and Shatru and Abhi (Naveen Chandra) kidnap Sruthi (Piaa Bajpai) to blackmail her father. Sruthi lives amid these semi-outlaws, and as expected, love blooms between her and Abhi.

Somewhere in between all this is a new cop, Ladda (Abhimanyu Singh), who is hell-bent on clearing the police department's files and killing all of Shatru's gang members.

The regular plot of encounter-cop vs ethics aside, Dalam asks relevant questions on the dignity of Naxalites who surrender, their social stigma, and their identity crisis in a ruthless law-and-order system that sees no difference between native outlaws and murderer.

Interestingly, it doesn't glorify Naxalism, though it doesn't completely belittle it. In one comic scene, the characters played by Taagubothu Ramesh and Dhanraj are cursing their mentor for "misleading" them into the revolution at impressionable ages. But even more interestingly, the plot is designed to make you sympathize with the cause - mostly because, according to it, there seems to be no sane/civil solution to people who are stuck in the movement even if they want to get out.

It's a decently directed movie, and the story flows neatly for the most part. The characters are nicely etched. There is a bit of comedy as well, thanks to Dhanraj and Ramesh. The overall tone is sombre and dark, yet human. Despite its violent content, the film is not as loud as it is thought-provoking. The film is also suitably intriguing.

A back-story or two form the human interest element. One of the men (Dhanraj) has a maradalu, and this forms the premise of a cute little story that is both funny and touching.

Of course, Dalam is far from perfect. In an effort to sound grandiose, the lines are overly-dramatized, but the writers didn't seem to notice the fact that the dialogues themselves are trite and unimpressive. There's so much that could be done here in terms of literary value (remember Prasthanam?), but it just looks like the crew didn't have enough steam.

The acting work is mixed, though the director must be commended for putting together a cohesive set of actors from such a diverse range as this.

Naveen Chandra exudes a smouldering air, is pleasing to look at and angry enough, but he sounds tamer than he looks. His voice is an unfortunate minus. Since Abhi is an emotionally distant and harsh man, 95% of Naveen Chandra's work in Dalam is walking around with a gun and looking (not even scowling) at people.

Kishore, as Shatru, comes across as the leader he portrays. To his credit, he does appear better simmering than Naveen Chandra does. However, neither Shatru nor Abhi have much to say in the movie, so a lot of this seems to be about the voice (we're assuming Kishore's voice was dubbed).

Dhanraj and Taagubothu Ramesh are given excellent screen time - in terms of both quality and quantity. They both nail it. Krishnudu doesn't quite fit into his role as a Naxalite/ex-Naxalite, but he tries. But overall, the actors playing the Naxalites display brilliant camaraderie, as evident in a song they break into.

Abhimanyu Singh looks, walks and talks very funny. But then, he does have that overall effect of terrifying the audience with his "menacing encounter cop" act. Maybe it was the gun.

Nagendra Babu, Nasseer and Saikumar appear in brief roles. Saikumar's character deserved a lot more story, though. Harshavardhan is good as the cop, and Ajay makes an impact as the villager. Aziz Naser is in a 15 second appearance. Piaa Bajpai is sweet enough, and the chemistry between her and Naveen Chandra works.

The music is quite good, and "Ikkada nundi ekkada daaka" is notably classy. But then, a couple of songs are out of place, especially the item number (why must every village mandatorily have one of these with village belles doing FTV-level catwalks and wearing designer rural wear?).

The visuals are tastefully done, and authenticity was clearly a priority. Despite the grim texture of the film, none of the scenes are repulsive per se.

Watch Dalam if serious cinema is your sort of thing. Tollywood is letting the sun shine on the smaller guys for a while, so this might be one of the films in your to-do list this month. It might not stick around for long, though.
Share. Save. Connect.
Tweet
DALAM SNAPSHOT 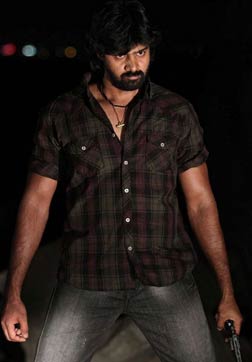 ADVERTISEMENT
This page was tagged for
Dalam telugu movie
Dalam reviews
release date
Naveen Chandra, Kishore
theatres list
Follow @fullhyderabad
Follow fullhyd.com on
About Hyderabad
The Hyderabad Community
Improve fullhyd.com
More
Our Other Local Guides
Our other sites
© Copyright 1999-2009 LRR Technologies (Hyderabad), Pvt Ltd. All rights reserved. fullhyd, fullhyderabad, Welcome To The Neighbourhood are trademarks of LRR Technologies (Hyderabad) Pvt Ltd. The textual, graphic, audio and audiovisual material in this site is protected by copyright law. You may not copy, distribute, or use this material except as necessary for your personal, non-commercial use. Any trademarks are the properties of their respective owners. More on Hyderabad, India. Jobs in Hyderabad.