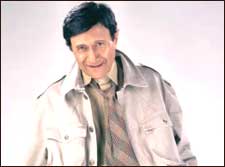 Ghazala Rizvi / fullhyd.com
EDITOR RATING
5.0
Performances
Script
Music/Soundtrack
Visuals
NA
NA
NA
NA
Suggestions
Can watch again
NA
Good for kids
NA
Good for dates
NA
Wait to rent it
NA
Well! Let’s first apologize for this review if not for the movie. Before SRK clouded our vision, and much before Amitabh’s 'mere pas maa hai' sent our blood racing, Dev Anand was the Star. Our Dad’s generation grew up watching Guide and Jewel Thief, and the generation previous to him, imitating Dev’s Taxi Driver image. But good things go, and should be let gone - for only then you can enjoy the past and the nostalgia.

Dev Sahib, as he is now lovingly known, has no doubt impressed and inspired more people in his life than even the longest running politicians. Nobody’s grudging his vigor, his enthusiasm, and the gusto with which he makes his films. It is the packaging and the presentation of the flick, that become the man’s ultimate nemesis.

Mr. Prime Minister is a hard-on hit at the murkiness of the Indian politics. But like a thread-bare ragged doll, the story is too bare, draped only in a single strand - you get ounces over ounces of Dev Anand’s piece of mind. The point is moot - disaster politics, coalition horse-trading, Al Qaida, Afganistan - Dev Sahib has his fingers in all the pies, and has ready to serve solutions too.

Mr. Prime Minister is about Johnny Master (Dev Anand), an earthquake victim who has lost his memory in addition to everything else. Johnny sells newspapers and passes his time disrupting political rallies by harassing the speakers with his acerbic questions. Soon, the locals proclaim him as their leader, and he goes on to become an MP.

Before Johnny could indulge into any statecraft, he is kidnapped. The torture that his enemies mete out to him comes as a bane to him - his amnesia is cured, and he remembers that he is Prem Batra, the third richest man of UK. Life gets even better when he discovers he is husband to Suzanna, a long-legged barely out-of-college chic.

The remaining flick deals with Perm Batra’s big coup of the political arena, where he bids for the Prime Ministerial post. What could have become a powerful call for some serious soul-stirring, however comes out as a laughable attempt. Dev Anand may feel 40, but he looks his age, and is highly out of his element. The Indian cinema has warmed up to veteran actors, but only to those who follow the protocol of aging gracefully.

The highlight of the movie is perhaps, a rap number, written, tuned, and sung by the Big D himself. Overall, the story is credible if not captivating, and the concern expressed over the country’s situation is genuine, if not original. A couple of highly disposable but raunchy numbers are added to rev up the show, but there is indeed a beautiful track, 'Main Khoya', by Babul Suprio.

If you must, then watch it for the old times’ sake.
Share. Save. Connect.
Tweet
MR. PRIME MINISTER SNAPSHOT

ADVERTISEMENT
This page was tagged for
Mr. Prime Minister hindi movie
Mr. Prime Minister reviews
release date
Dev Anand, Prem Chopra
theatres list
Follow @fullhyderabad
Follow fullhyd.com on
About Hyderabad
The Hyderabad Community
Improve fullhyd.com
More
Our Other Local Guides
Our other sites
© Copyright 1999-2009 LRR Technologies (Hyderabad), Pvt Ltd. All rights reserved. fullhyd, fullhyderabad, Welcome To The Neighbourhood are trademarks of LRR Technologies (Hyderabad) Pvt Ltd. The textual, graphic, audio and audiovisual material in this site is protected by copyright law. You may not copy, distribute, or use this material except as necessary for your personal, non-commercial use. Any trademarks are the properties of their respective owners. More on Hyderabad, India. Jobs in Hyderabad.