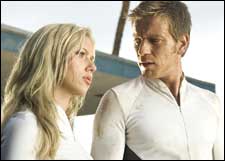 Ghazala Rizvi / fullhyd.com
EDITOR RATING
5.0
Performances
Script
Music/Soundtrack
Visuals
NA
NA
NA
NA
Suggestions
Can watch again
NA
Good for kids
NA
Good for dates
NA
Wait to rent it
NA
M W Shelly's Victor Frankenstein had figured it all wrong. Human creations, made from dead bodies or live cells, are never going to compete with us humans - for our survival, we can go to any extent. We, are the monsters.

Or so Michael Bay's The Island portrays. While ethics and big money are still fighting it out over a few human blastocysts, Bay's creation takes you way ahead in the 21st century where not only are the clones harvested, they also battle for their basic clone rights, integration, Liberté, Egalité, Fraternité, chic sneakers, cool drinks...

The Island starts with Lincoln 6 Echo (Ewan McGregor) waking up from a nightmare in which he sees himself drowning. He has his day cut out for him - from his power-packed bathroom which tests and notifies about chemical changes in his body, to the factory floor where he works, his life moves on with a chronological precision. His glass and artificial air existence is tightly regulated. If his urine shows excess sodium, it's summons from Dr. Merrick (Sean Bean); if his proximity to fellow resident Jordan 2 Delta (Scarlett Johansson) increases, it's reprimand time from the ubiquitous guards.

If you've not yet guessed it by his name, a tour of the shielded city where he resides will make it clear that Lincoln 6 Echo is a clone. This underground city has huge amphitheaters where humans are being grown, sophisticated clinics where organs are being harvested from these clones, and work areas where the duplicates spend their time before dying for the originals.

The set-up is the master plan of Merrick, who is maintaining the clones for his clients and sponsors. What started as research on manufacturing vegetative, emotions-free clones, expanded into mammoth proportions - the clones became only too human, and refused to behave like plants from whom you can pluck a fruit from hither and a flower from there.

So, they were made to believe that they are real human beings, salvaged and kept in decontamination after the suburbia was completely destroyed by calamities. Everyday at the facility, an eager sea of faces awaits the draw of lucky winners to be sent to The Island, an open, aboveground haven. Credulous and naïve, the selected people are, in reality, taken to be butchered, as and when the clients need redemption on his insurance.

Lincoln 6 Echo, goaded by his nightmare, a lively moth, and several other undisclosed factors, has his intuition buzzing like a swarm of bees. About the same time that Jordan wins the Island lottery, Lincoln finds out the true nature of this Island trip. Escaping the jungle of floors and tunnels to reach open skies is easy - making sense of shit-pots that real people call cans, is the real teaser.

Groveling through human settlements and accoutrements, the duo (Lincoln and Jordan) are able to contact McCord (Steve Buscemi), who is a human supervisor on the payroll of Merrick. McCord gives them the real lowdown on 'what' they are, and where to find their originals. Lincoln and Jordan set out to tell the world that clones they may be, but they are alive.

Ewan McGregor acts good and looks better, which can't be said about Johansson. Perhaps, trying to perfect manufactured-beings' look made them so plastic-faced. Humor is lost on both, and action is… well mostly against them.

While the look of the movie is kept simple (all the gadgets, logic and weapons are believable) you'll miss the fast paced mind-churner effect like you had with The Matrix. Plenty of cars, bridges, trains and billboards will blow-up in your face, yet you'll not feel the spine-tingling sensation of riding a roller coaster. The story just about finishes in the first half hour, the rest is attempted action - and it's not scintillating like in Sahara, let alone in Revenge Of The Sith.
Share. Save. Connect.
Tweet
THE ISLAND SNAPSHOT

ADVERTISEMENT
This page was tagged for
The Island english movie
The Island reviews
release date
Ewan McGregor, Scarlett Johansson
theatres list
Follow @fullhyderabad
Follow fullhyd.com on
About Hyderabad
The Hyderabad Community
Improve fullhyd.com
More
Our Other Local Guides
Our other sites
© Copyright 1999-2009 LRR Technologies (Hyderabad), Pvt Ltd. All rights reserved. fullhyd, fullhyderabad, Welcome To The Neighbourhood are trademarks of LRR Technologies (Hyderabad) Pvt Ltd. The textual, graphic, audio and audiovisual material in this site is protected by copyright law. You may not copy, distribute, or use this material except as necessary for your personal, non-commercial use. Any trademarks are the properties of their respective owners. More on Hyderabad, India. Jobs in Hyderabad.