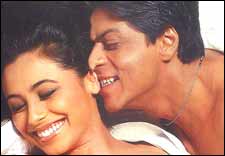 Engagement ring, wedding ring and suffering are the three rings of marriage. Shahrukh Khan keeps the first two to himself, and, chalte chalte, passes on the third to us.

Okay dude, we all know marriage is for morons, but that still does not give Shahrukh's production company (Dreamz Unlimited) the prerogative to put us through such a pain. Why bother to tell us the obvious?

This one's supposed to be a reflection of our lives. But it looks more like somebody sneaked in a handycam in a newly wed's home and aired the proceedings on a flat screen. They replaced the man with Shahrukh and the wife with Rani, allright, but that still doesn't make this 'slice of life' kinda movie any interesting. Anyone game for watching the husband-wife stuff on screen, that too with arguments like 'why do you leave the wet towel on the bed' and 'I am not screaming, you are screaming' stuff? 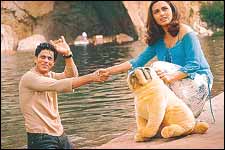 Raj (Shahrukh) falls in love with Priya (Rani) after some contrived sequences. Priya, a rich Dad's only beti, is looking for a filthy rich and strikingly handsome guy. But like most girls in real life, she ends up with a strikingly filthy guy. Well, two out of four things are not bad, she thinks. Raj, of course, seems to love this innocent looking girl with six inches of eyeliner and a permanent blow-dried hairdo. So both of them are hitched after some high drama at Priya's house.

A year into the wedding, she starts mending his filthy, dirty ways. "Raj, don't leave your shoes there." "You've left your stinking wet towel on my bed." And so on. Raj gets furious and blows off his lid. One argument leads to a fight, a fight to a battle, and so on and so forth. 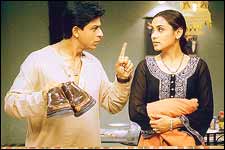 When his company is in a big mess, richie rich Priya's folks offer her financial help. She accepts, but the stuck-up Raj makes a big issue out of this. Whatever happened to his ultracool guy image when he kicks up dust about her family helping him out? He says nasty things about Priya, and she walks out on him. After the mandatory airport scene, they unite. They live happily ever after, but nobody knows how the idealistic Raj manages to solve the Rs. 25 lakh crisis. So much for a story.

Throughout, Shahrukh comes across as a macho, testosterone-driven egomaniacal husband - yet, he gives hazaar fundas about love, relationships and other yadda yadda. All this while being a cry baby - he cries at the drop of hanky. Raj is so irritating in the first half that you wish he were some gadget that can be shut down for a while. He hams throughout, but still manages to entertain us, although in a scene here and a one-liner there.

Rani puts up a good fight with Shahrukh - literally, too. However, their chemistry is nowhere to close that in Kuch Kuch Hota Hai. And her make-up is awful. Aziz Mirza does come up with some brilliant scenes, but they are so few in this cliché-ridden movie that they all go down the drain.

This one's just the kind of a movie that girlfriends will insist on watching, and the boyfriends will resist. And like in the movie, the argument persists.
Share. Save. Connect.
Tweet
CHALTE CHALTE SNAPSHOT
See Chalte Chalte full details
CHALTE CHALTE USER REVIEWS
1 - 9 OF 9 COMMENTS
POSITIVE  |  NEGATIVE |  NEWEST  |  OLDEST  |  MOST HELPFUL  |  LEAST HELPFUL
USER RATING
7.2
130 USERS
Performances
Script
Music/Soundtrack
Visuals
NA
NA
NA
NA
Can watch again - NA
Good for kids - NA
Good for dates - NA
Wait to rent it - NA
Shreya Patel on 16th Jan 2004, 12:23am | Permalink
I Luv SRK because he's cute and I like the film of Chalte Chalte.

RATING
2
Danie Jakes on 15th Jul 2003, 7:35pm | Permalink
It's different from the everyday movies - it tells us (the young lovers) that marriage is not a bed of roses - both the partners have to make adjustments.
RATING
8
Ankit Tanna on 24th Jun 2003, 12:36pm | Permalink
i m a big fan of titanic
please send titanic photos
ankit

ADVERTISEMENT
This page was tagged for
full movie chalte chalte jalsamovies
Chalte Chalte Shahrukh Khan HD movie Hindi
Chalte Chalte hindi movie
Chalte Chalte reviews
release date
Follow @fullhyderabad
Follow fullhyd.com on
About Hyderabad
The Hyderabad Community
Improve fullhyd.com
More
Our Other Local Guides
Our other sites
© Copyright 1999-2009 LRR Technologies (Hyderabad), Pvt Ltd. All rights reserved. fullhyd, fullhyderabad, Welcome To The Neighbourhood are trademarks of LRR Technologies (Hyderabad) Pvt Ltd. The textual, graphic, audio and audiovisual material in this site is protected by copyright law. You may not copy, distribute, or use this material except as necessary for your personal, non-commercial use. Any trademarks are the properties of their respective owners. More on Hyderabad, India. Jobs in Hyderabad.