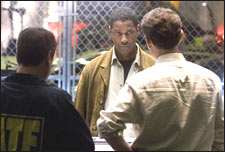 Samrat Sharma / fullhyd.com
EDITOR RATING
6.0
Performances
Script
Music/Soundtrack
Visuals
NA
NA
NA
NA
Suggestions
Can watch again
NA
Good for kids
NA
Good for dates
NA
Wait for OTT
NA
The first thing you think of when you go in to see a Tony Scott and Jerry Bruckheimer film is that stuff is going to blow up. Regardless of cast, theme or story, if there ain't no explosions, it ain't a Scott-Bruckheimer (or should it be Tony and Jerry?) film.

Surely enough, soon after the montage of a sunny New Orleans ferry ride comes up on screen, a bomb blast blows it and everyone on board to smithereens. Less than five minutes into the film, and I already have a sense of déjà vu.

Déjà Vu has all the trappings of the kind of film Tony Scott has become known for, and the look is similar in most parts to the extra bloom, burn-out effect he has employed in his recent films. He has toned the pyrotechnics down from Domino, but since it is essentially a Scott film, it remains the familiar viewing that you would expect.

But maybe I'm taking it all too seriously. This is another popcorn muncher of an action flick from the house of Bruckheimer, and is appropriately silly and time-pass. It starts off as a standard cop-action film, soon reveals its true, science-fiction colors, and then dies off without really being able to convince us of either.

The plot, though stolen from a number of film and literary sources, is interesting to begin with. Like I was saying, a bomb blows up a New Orleans ferry packed killing a lot of people. Investigating Officer Doug Carlin (Denzel Washington in his nine millionth cop role) notices the body of a young woman, Claire Kuchever (Paula Patton), to be slightly skewed from the incident, and concludes she was killed before the bomb went off, and possibly could have been killed by the terrorist himself. He decides to investigate her last days and reconstruct what happened.

So far, so conventional. Now is when the first twist hits. A crack team of FBI agents (led by Val Kilmer) introduce him to a new gadget, one that can actually be used to watch events in the past. Yep, you read that right. The cops can now look into the past. As incredulous as that sounds, when they use that to view Claire's last days, Carlin falls in love with her. And as he discovers that he can use it to transport himself or other human beings, he goes deeper in his obsession in saving Claire and stopping the right wing extremist terrorist, Carroll Oerstadt (James Caviezel).

By now you're convinced one way or another about if you want to watch this film or not, depending on if you thought "cool!" or "what?" when you read the last sentence. But whatever the merits or not of the plot be, Tony Scott decides to, in trademark fashion, blunder along the plot without paying attention to the little details that make anything believable. The film just staggers along with the high speed car chases, and hopes that no one will notice.

The characters are standard action film roles: action hero, pretty woman, golden-hearted boss, a sidekick, and an intelligent and enigmatic villain. Nevertheless, I was surprised to see some truly competent acting here. Denzel plays the role with sobriety that suits him, and though familiar, keeps him in the league of the charismatic actors. Caviezel is superlative and very convincing as the terrorist, and despite being the main baddie, has a rare understatement in the role.

All this is secondary to the car chases and the explosions and the action. After all, this is a Bruckheimer production. Scott delivers in spades - there are interestingly conceived chases and crashes on foot and in car, jumps, leaps, explosions, weapons and gore and blood, and all of it edited sharply in Scott's halting-racing style. It maybe a silly pop film, but it is seldom dull - the makers cram the screen with so much kinetic energy, it is almost palpable.

Déjà Vu is an elegantly mounted thriller, however hackneyed the treatment of the plot be. The action and the momentum let up in the middle, and the film ceases to be terribly exciting once the central conceit is out there, but it does pick itself up to deliver an apt loopy ending to an increasingly goofy script. A watchable and not entirely staid film, with enough fireworks to keep the action buff happy, it however remains a movie that wants to be an intelligent thriller, and ends up being more of the same. Déjà Vu.
Share. Save. Connect.
Tweet
DEJA VU SNAPSHOT

ADVERTISEMENT
This page was tagged for
Deja Vu english movie
Deja Vu reviews
release date
Denzel Washington, Paula Patton
theatres list
Follow @fullhyderabad
Follow fullhyd.com on
About Hyderabad
The Hyderabad Community
Improve fullhyd.com
More
Our Other Local Guides
Our other sites
© Copyright 1999-2009 LRR Technologies (Hyderabad), Pvt Ltd. All rights reserved. fullhyd, fullhyderabad, Welcome To The Neighbourhood are trademarks of LRR Technologies (Hyderabad) Pvt Ltd. The textual, graphic, audio and audiovisual material in this site is protected by copyright law. You may not copy, distribute, or use this material except as necessary for your personal, non-commercial use. Any trademarks are the properties of their respective owners. More on Hyderabad, India. Jobs in Hyderabad.