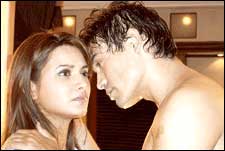 That is not to say that it is a bad movie. Some might even find it interesting, if they have not seen the other 35, 758 similar movies that depict the life of an abala naari and her consequent retribution.

Saumya Mathur (Diana Hayden) does not believe in the love/marriage shenanigan. So, she does not let any man get to beyond first base with her. But, this is where Karan Malhotra (Shahwar Ali) does the smart thing. He proposes to her on their third date. And, she thinks that any man who can wait this long to get to second base has got to be a man of substance. She accepts.

In between product promotions of Garden Vareli, Café Coffee Day and Real Fruit Juice, life is hunky-dory for the newlyweds. A child is born. And a few years later, for some obscure reason, Karan decides to take a shower in his genuine Jockey underwear, the repercussions of which were far-reaching.

While he was in, his mobile phone decides to ring. Now, Saumya is troubled because mobile phones are not known to ring of their own accord. She digs in, and finds out that the culprit was Ruby, a woman her husband is sleeping with. She tells Karan. Karan gets angry - what does she think of him? Of course he knows that he is sleeping with Ruby. Duh!

Unable to digest her stupidity, she asks for divorce. This makes Karan furious. He uses her as a punching bag. That is not something that today's woman can take. No man can hit her and expect her to do nothing about it. So, she goes to Ruby's house and goes about beating her up and calling her names like Tum Jaisi Aurat.

Feeling suitably refreshed and energised, she now runs away with her daughter. Karan is on her heels - with those pencil ones she possibly could not hope to run very fast, could she? But, Karan is even slower as he has lots of pits stops to make in sleazy bars and bedrooms for those 'hot, steamy' songs, and one item number featuring Nigar Khan, who gives us one of the few kisses in a Bollywood movie that involves tongue action.

Saumya seems to have had it by now. Partly, because she is tired of carrying her daughter while running. But, mostly, because Karan never kissed her with tongue action. She decides to take matters into her own hands, and legs. She goes to Karan and beats the hell out of him but stops short of killing him because he was her husband, the father of her daughter. Then Karan does the stupid thing. He tries to knock her off. Then she kills him.

Thankfully, that was also the editor's cue to reel in the last scene. A few members of the audience had decided for themselves what the last scene of the movie should be and had walked out at that point. Their loss, entirely, as they missed instead of the customary 'The End' something called '…and life begins…'.

But, now that I look back it does not seem a loss at all.
Share. Save. Connect.
Tweet
AB...BAS SNAPSHOT

ADVERTISEMENT
This page was tagged for
ab bas hindi movie
ab bas full movie
Ab...Bas hindi movie
Ab...Bas reviews
release date
Follow @fullhyderabad
Follow fullhyd.com on
About Hyderabad
The Hyderabad Community
Improve fullhyd.com
More
Our Other Local Guides
Our other sites
© Copyright 1999-2009 LRR Technologies (Hyderabad), Pvt Ltd. All rights reserved. fullhyd, fullhyderabad, Welcome To The Neighbourhood are trademarks of LRR Technologies (Hyderabad) Pvt Ltd. The textual, graphic, audio and audiovisual material in this site is protected by copyright law. You may not copy, distribute, or use this material except as necessary for your personal, non-commercial use. Any trademarks are the properties of their respective owners. More on Hyderabad, India. Jobs in Hyderabad.