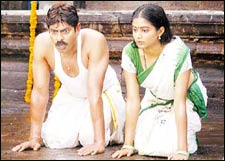 EDITOR RATING
7.0
Performances
Script
Music/Soundtrack
Visuals
NA
NA
NA
NA
Suggestions
Can watch again
NA
Good for kids
NA
Good for dates
NA
Wait to rent it
NA
Pellaina Kothalo is like an advertisement for marriage. There's the perfect couple - the tall, broad hero is a 100% husband-material executive who dresses in Arrow, Indigo Nation and Zodiac, doesn't smoke, drink or party, stays away from women who do, is manicured, gelled and deo'd, yet has good old middle-class values, and earns enough to make it look easy to live.

The slim, nubile heroine is sprightly and pretty, can look down her nose at people, makes just as much money, has the same middle-class values, and loves life.

Pellaina Kothalo is a sugary and cute movie. Not altogether in the league of Pelli Pustakam perhaps, but certainly within breathing distance, and certainly a must-watch. If the hallmark of a good romance is that you should want to see it again in 2 months, then this one certainly makes the cut for you to hit the theaters, and with everyone you can think of.

Let's talk about the tale, first. Hari (Jagapati) is a software professional who earns Rs. 50,000 a month. Under enormous pressure from his parents who want him married, his friend Bhagawan (Krishna Bhagawan), an MCP if there ever was one, arranges for him to meet Lakshmi (Priyamani), in a formal pelli choopulu. They like each other instantly, and get married.

The spanner in the works is now thrown in by Bhagawan, who advises Hari that if he doesn't stand his ground and be dominating for the first few days, he will be doomed to being a hen-pecked husband; and by Jhansi (Jhansi), Lakshmi's close friend and guide and a domineering wife who keeps her husband Chalapathi (Sunil) under her toe, who tells Lakshmi basically the same thing.

This leads to the normally sensible Hari and Lakshmi trying to be one up with the other right from day 1 (or, let us say, night 1). Each wants to wait until the other blinks first, and so the marriage is never consummated, they hire a 3-bedroom apartment to live in so they can have separate bedrooms, they buy their own appliances - separate TVs, refrigerators and even chocolates - and in general stay frustrated.

When Bhagawan and Jhansi go overboard in their suggestions eventually, things hit rock-bottom, and Lakshmi and Hari decide to divorce. And this is when Hari's grandparents (Kota and Gitanjali) come in. Ostensibly completely unaware of the situation, they insist that for the good of the family, the young couple should perform a dampatya vratam, a ceremony that every newly-wed couple performs in the family.

So Lakshmi and Hari go along with the old couple to the family's ancestral house in their village in coastal Andhra, and start a week-long series of religious rituals, several of which seem to involve close physical contact. Nothing works like lust in a marriage, and the chemistry starts getting kindled as the grandparents orchestrate a well-planned series of psychological manouvers.

The second half of Pellaina Kothalo is better than the first, defying the old Telugu film curse. It's always fun to see an estranged couple get back together, and when it's done well, you stare transfixed at the screen with a stupid grin on your face. The heroic efforts at making eye contact, the gestures towards being polite and respectful, the simmering undercurrent of love and desire building up due to that, the infinitely enhanced pleasure of physical touch when it's become a forbidden fruit… yes, they know how to do it.

If the first half of the film goes all designer on you, with bright colors, modular furniture and ensemble clothing, the second half is even better, spent on the banks of the Godavari, amid green fields, in temple courtyards, and inside traditional village houses - what's English for penkutillu? The world of anklets, bangles, saris, vermilion and turmeric sets in, and yes, it warms you up like Telugu tradition always does.

The film also has some great comedy - the lazy drawl of Krishna Bhagawan, the hyper-agitated Venu Madhav, the omni-irate Brahmanandam, the thigh-slapping Kovai Sarala, the deadpan Sunil, the drifting-back-into-consciousness M S Narayana, the never-say-ruffled Dharmavarapu, and the rest of the brigade. The Brahmanandam-Sarala bit is perhaps not as funny as the rest, and completely disconnected, but on the whole this one keeps you pretty much happy in its light-hearted moments.

While Jagapati is his usual self, Priyamani deserves mention for breathing life into a character that has to simultaneously show longing, ego, confusion, scorn and desire in a newly-married girl, and for doing it without looking like she's trying. The climax where Kota talks about the difference between a mistake and a deficiency, can change a lot of perspectives on managing relationships. And the music, slow and soothing, can produce a hit or two.

This is highly recommended for all couples, and, actually, everyone.
Share. Save. Connect.
Tweet
PELLAINA KOTHALO SNAPSHOT

Looking from outside the box : At the very end when J Babu said ""you thief ""
I would have said "" You thief I want my phone connected"" (1) It begins with phone connection.
(2) Consummation of the marriage

NO OFENCE TO ANYONE, PLEASE
Canada / Mauritius

ADVERTISEMENT
This page was tagged for
pellaina kothalo movie
pellaina kothalo cinema
pellaina kothalo Telugu movie
pellaina kothalo Telugu
Pellaina Kothalo telugu movie
Follow @fullhyderabad
Follow fullhyd.com on
About Hyderabad
The Hyderabad Community
Improve fullhyd.com
More
Our Other Local Guides
Our other sites
© Copyright 1999-2009 LRR Technologies (Hyderabad), Pvt Ltd. All rights reserved. fullhyd, fullhyderabad, Welcome To The Neighbourhood are trademarks of LRR Technologies (Hyderabad) Pvt Ltd. The textual, graphic, audio and audiovisual material in this site is protected by copyright law. You may not copy, distribute, or use this material except as necessary for your personal, non-commercial use. Any trademarks are the properties of their respective owners. More on Hyderabad, India. Jobs in Hyderabad.