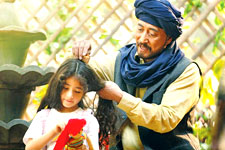 Kritika Deval / fullhyd.com
EDITOR RATING
7.5
Performances
Script
Music/Soundtrack
Visuals
8.0
7.0
8.0
9.0
Suggestions
Can watch again
Yes
Good for kids
No
Good for dates
Yes
Wait for OTT
No
Most of us have some acquaintance with the beloved story of the Kabuliwala, a tale not of grand adventures and passions but of the quiet depth of human emotion and the way the mundaneness of living can mask tragedy. Because, the fact of life is that no matter what bonds are formed or what horrors occur, time passes. And children grow up, and they forget. The Bioscopewala chooses to stay true to this heart of a story about a charismatic stranger in a strange land who finds solace in a little girl.

The story begins with a journey, a bereavement, a hint at an estrangement, and a mystery. Mini Basu (Geethanjali Thapa), a filmmaker who lives in France, receives news of her father's death due to a plane crash en route to Afghanistan, and rushes home to Calcutta to take care of things. We find out that Mini and her father, Robi Basu (Adil Hussain), had not been on good terms for some time now for reasons we hope will become clearer as the film goes on.

As Mini deals with the unique kind of pain brought by the death of a distant parent, an unclean sort of grief tinged with impatience and resentment and the determination to do right despite it all that Thapa conveys brilliantly, she's beset by a mystery. The police drop off an elderly ex-convict at her home without so much as a by your leave, informing her that this man, Rehmat Khan (Danny Denzongpa), was given into the guardianship of Robi, that he has Alzheimer's, that her father had fought for this man's release, and that he is now her responsibility.

Resentful of yet another responsibility dropped on her by a seemingly absentee father who went and got himself killed on a journey that he did not even bother telling her about, Mini nevertheless finds herself drawn into a mystery whose answers lie in her own past. She wakes up one night to find Khan humming a tune that triggers memories of a man with a giant personality and a bioscope, teaching her five-year-old self (Miraya Suri) to love cinema and to create stories out of thin air.

When she realises that this old man with no control over his bodily functions that she was so resentful of is indeed the much loved Bioscopewala of her childhood, she is beset by remorse. With cues from her own childhood memories and a trusty sidekick in the form of her father's caretaker Bhola (Brijendra Kala), Mini then takes us on a journey to find out who Rehmat Khan is, through inner city Calcutta, through old friends, and finally, through the dilapidated streets of a once-peaceful Kabul.

Bioscopewala is a beautiful film full of people with a piquant beauty whose charm would not the whole without the very human flaws they wear on their sleeves. Geethanjali Thapa is the penultimate millennial, idealistic and passionate, impatient and petulant. Whether she is lost in memory or throwing a tantrum, a lot of us will find ourselves within her character as she tries to find her place in a world she finds herself out of time with. Miraya Suri who plays five-year-old Mini is an absolute peach, and very, very charming. Adil Hussain is brilliant as a man who distances himself from his own child in his love of cinema.

The true star here, though, is Danny Denzongpa, who plays an Afghan refugee who loves cinema and believes it to be a tool in the fight against oppression, and who misses his little girl and transfers all that hope and love for his family and homeland onto another little girl in this strange new world. Denzongpa rarely says more than a word or two. But most of the scenes involving him will leave even the most emotion-allergic of you (read: this writer) with your throat clogged and your heart full.

This is not to say that the movie is without flaws. Bioscopewala lasts about an hour and a half. In that time, it evokes as much bewilderment as it does joy and despair. Theads of story are taken up without being seen to their ends. While the imperfection of people who are nevertheless capable of abiding love is a big theme in the story, its consequences still leave you with a dissatisfactory sense of injustice. There are parts where the emotions displayed by characters seem a bit contrived and take away from the emotion that should be inherent in the scene.

But for all that, this is still a movie that has had a lot of very evident devotion to storytelling put into it, whether it be in the poetry of the dialogue or the way the narrative moves from endings that are beginnings and beginnings that are endings. The cinematography is a lovely Matryoshka doll full of layers and meaning that are a delight to unravel, and the music invariably evokes a longing for an imagined past. 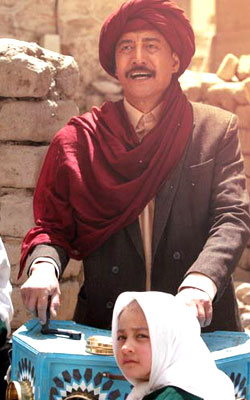 ADVERTISEMENT
This page was tagged for
Bioscopewala hindi movie
Bioscopewala reviews
release date
Danny Denzogpa, Geetanjali Thapa
theatres list
Follow @fullhyderabad
Follow fullhyd.com on
About Hyderabad
The Hyderabad Community
Improve fullhyd.com
More
Our Other Local Guides
Our other sites
© Copyright 1999-2009 LRR Technologies (Hyderabad), Pvt Ltd. All rights reserved. fullhyd, fullhyderabad, Welcome To The Neighbourhood are trademarks of LRR Technologies (Hyderabad) Pvt Ltd. The textual, graphic, audio and audiovisual material in this site is protected by copyright law. You may not copy, distribute, or use this material except as necessary for your personal, non-commercial use. Any trademarks are the properties of their respective owners. More on Hyderabad, India. Jobs in Hyderabad.