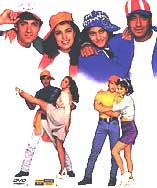 Arpan Panicker / fullhyd.com
EDITOR RATING
6.0
Performances
Script
Music/Soundtrack
Visuals
NA
NA
NA
NA
Suggestions
Can watch again
NA
Good for kids
NA
Good for dates
NA
Wait to rent it
NA
Ishq was an Inder Kumar movie that got lucky and hit the right tone at the box office. A hackneyed story line, hammy acting, tearjerking scenes... in short, everything that goes into a normal Hindi potboiler. But apparently that was what the audiences wanted. Ishq was one of the biggest hits of the year.

The story is totally stale, but is boosted by good comedy in the first half by the two heroes. Ajay and Raja are two friends who are ready to give their lives for each other (Isn't that always the case!). Ajay (Ajay Devgun) is a real rich kid, whereas Raja (Aamir Khan) is a basti me rehne wala chokra. But their friendship transcends all barriers of wealth and status.

Similarly Raja and Kajol are two very good friends. Madhoo (Juhi Chawla) is the spoilt rich brat and Kajol (Kajol) the poor girl. Then after some refreshing comedy scenes, just when you feel that the movie is going great, the romance starts. Ajay falls in love with Kajol and Raja falls for Madhoo. All this happens after the usual share of flirting.

But all the glitches in the romantic angle are worked out by the interval itself. But Hindi movies are supposed to go on for the mandatory three hours. So, the director makes a mess of the second half with complications, misunderstandings, melodrama; actually everything that can test a sane person's patience.

The fathers of Ajay and Kajol are good friends and so want to get the two married. In order to do that, they employ crooked methods to break up the two pairs of lovebirds. Misunderstandings creep in and there is heavy sentimental stuff with all the regular Hindi film clichés included to bolster the sagging story line. After the onscreen happenings have stretched the endurance levels of the audience to the hilt, things are finally resolved, and the movie comes to a merciful ending. The climax is so cliched that you literally beg for mercy.

The only good thing about the movie is the first half. There are some good songs, picturesque locales shot nicely, and the two heroes doing rather well at comedy. The song "Mr Lova Lova" comes near the interval, and after that things get progressively worse. But if you are the type that doesn't mind an overdose of sentiment, then you won't have much to complain about.
Share. Save. Connect.
Tweet
ISHQ SNAPSHOT

ADVERTISEMENT
This page was tagged for
indian movie ishq reviews
ishq film hindi
ishaq hindi film
Eska hindl film
Ishq Full Hindi Movies Amir Khan Ajoy Devgan
Follow @fullhyderabad
Follow fullhyd.com on
About Hyderabad
The Hyderabad Community
Improve fullhyd.com
More
Our Other Local Guides
Our other sites
© Copyright 1999-2009 LRR Technologies (Hyderabad), Pvt Ltd. All rights reserved. fullhyd, fullhyderabad, Welcome To The Neighbourhood are trademarks of LRR Technologies (Hyderabad) Pvt Ltd. The textual, graphic, audio and audiovisual material in this site is protected by copyright law. You may not copy, distribute, or use this material except as necessary for your personal, non-commercial use. Any trademarks are the properties of their respective owners. More on Hyderabad, India. Jobs in Hyderabad.