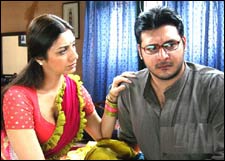 EDITOR RATING
3.0
Performances
Script
Music/Soundtrack
Visuals
NA
NA
NA
NA
Suggestions
Can watch again
NA
Good for kids
NA
Good for dates
NA
Wait to rent it
NA
Idi Sangathi is a remarkable movie - there isn't a single clean character in it. Everybody is a crook.

Or maybe what is remarkable is the world, which is merely what the movie tries to reflect.

It's possible to dismiss Idi Sangathi as a particularly pessimistic view of the world. Only, all of us who've lived long enough know deep down that it would be particularly optimistic to do that. If we don't know too many bad people, it merely means we haven't networked enough. Or that we haven't had a chance to see all those people who we think we know well, face really serious temptation or serious trouble. And yes, that includes our best friends and our close family. And, yes, us. Put it down to a blinkered view of the world, but don't come back to us when the haze lifts.

Idi Sangathi is a dark film in the guise of a comedy. Actually, in the guise of a series of cartoon strip jokes. Which is why the film doesn't work, despite an unusual script. It is more like reading a compilation of the popular Eenadu cartoonist's daily jokes on politics and corruption than watching a proper story told on screen.

Indeed, the film's main theme is how money can make people abandon even basic scruples and relations, but it progresses more as a sequence of portrayals of various individuals' reactions to the temptation of serious money, painted in humor. Like we said, it feels like a series of satirical jokes on society today rather than a gripping narrative. There isn't much happening in terms of actual story on screen, making it a slow movie, and, finally, rather pointless. An unconvincing ending doesn't help things.

The film tells the story of Satya Murthy (Abbas) and his wife Swarajyam (Tabu). Murthy is an unscrupulous crime reporter for a leading daily, and on an assignment at a gruesome train accident, steals jewelry from the dead bodies, and a suitcase from the AC compartment.

The suitcase happens to contain diamonds worth Rs. 500 crores, and Swarajam discovers them first and hides them for herself since Murthy isn't the most polite or giving of husbands. The diamonds actually belong to the corrupt Prime Minister (Kota), who unleashes the entire intelligence and home ministry to recover them, though clandestinely. The unraveling of the tale sees everyone who gets on the assignment planning to gyp the rocks for themselves.

Swarajyam unwittingly leaves enough clues to help the law enforcement officials gain ground on her, and when Murthy gets into serious trouble, she loses all interest in the money and just wants her life back. However, it's too late, and everyone's neck-deep in trouble.

The film does a good job of showing an interesting aspect of human nature - our hypocrisy in judging others much more willingly than ourselves. There are enough and more jokes of characters complaining about all the lack of ethics in the world while lusting for ill-gotten riches themselves. However, unless you want to do some serious soul-searching, the film doesn't have much of anything to offer you. Only, if you want to do some serious soul-searching, the battle is already won - you don't need any movies.

Tabu essays the role of a flaky wife brilliantly - and it's reflective of the confused direction that she shows skin in a role like this and in a movie like this. It kind of defeats the point that the movie makes - so Chandra Siddharth will cater to the carnal instincts of his audiences to sell some extra tickets? By the way, she doesn't show as much as they would have you believe, so if that's the reason that you are planning to watch this, browse the web instead.

No one really has much to do - Kota looks nothing like a man who became PM, with the attempts to make him look comic hitting at the credibility of the movie itself. He, of course, does a fab job of whatever they shouldn't have made him do. And just what is Raja doing in the film? The role he plays of a rowdy-sheeter is miniscule and looks shoehorned in, and he doesn't fit it anyway.

Idi Sangathi is one of those films that is unclear on whether to be full-fledged parallel cinema or proper commercial stuff. Sometimes it appears to want to be some kind of Jaane Bhi Do Yaaron, but all it can do is get in the same sentence of a review as that film. Take it easy on your weekend.
Share. Save. Connect.
Tweet
IDI SANGATHI SNAPSHOT

ADVERTISEMENT
This page was tagged for
tabu idi sangathi
Telugu movie idi sangathi
idi sangathi full movie
idi sangathi telugu movie
Idi sangathi wiki
Follow @fullhyderabad
Follow fullhyd.com on
About Hyderabad
The Hyderabad Community
Improve fullhyd.com
More
Our Other Local Guides
Our other sites
© Copyright 1999-2009 LRR Technologies (Hyderabad), Pvt Ltd. All rights reserved. fullhyd, fullhyderabad, Welcome To The Neighbourhood are trademarks of LRR Technologies (Hyderabad) Pvt Ltd. The textual, graphic, audio and audiovisual material in this site is protected by copyright law. You may not copy, distribute, or use this material except as necessary for your personal, non-commercial use. Any trademarks are the properties of their respective owners. More on Hyderabad, India. Jobs in Hyderabad.