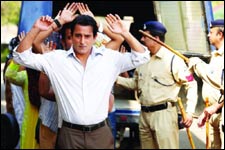 Deepa Garimella / fullhyd.com
EDITOR RATING
1.5
Performances
Script
Music/Soundtrack
Visuals
5.0
2.0
3.0
3.0
Suggestions
Can watch again
No
Good for kids
No
Good for dates
No
Wait to rent it
No
Gali Gali Chor Hai, indeed. What else can describe the annoyance you feel watching this astoundingly bad Office Office rip-off masquerading as a gentle social satire on corruption?

A film too small and inept for its ambition, GGCH is a tiresome watch. It's not just sleepy, it's unabashedly B-grade, with the makers having had no idea their plans on paper were turning out this bad.

Akshaye Khanna plays the common man Bharat, who is generally minding his own business but is dragged into a police case by a local politico who is miffed by Bharat. Basically, the cops tell Bharat that they've found a table fan stolen from his house, and, that he must take it back.

Bharat hangs around the police station and the local court, getting fleeced for every little "procedure" - he even has to bribe a panwallah whose other job is to act as a "witness" for random cases in court.

Of course, the drama is sorted out, but the writers go overboard and stick a sharper knife through Bharat's soul, putting him through an absolutely unnecessary predicament - one that has far more serious implications than a stolen table fan.

Bharat is also made to deal with the unfortunate problem of his wife (Shriya Saran) being angry with him because she's jealous of their hot (and always inappropriately clothed) paying guest (Mugdha Godse). Also, there is a Ramlila track going on simultaneously, with Bharat playing the role of Hanuman.

Meanwhile, Satish Kaushik's brand of corny sentiment, in the guise of expertly-written dialogues, further enhances your B-movie experience. The man plays Bharat's father, and his contrived lines are instant groan-inducers.

While Pankaj Kapoor's Office Office makes you feel sorry for the protagonist even as it stays harmless and light-hearted, GGCH paints a pathetic picture of Bharat. While the people Bharat encounters are not menacing, the problems he faces are.

In addition, this is bad writing. There are sparks of competence - in a brief scene or two - but overall, this satire seems an amateur attempt at the real thing. The dialogues are quite sad as well.

What is more saddening is the fact that fairly decent actors are so out of work they're in this. Akshaye Khanna is surprisingly not as good as you'd expect him to be. Shriya Saran is stuck with a rather non-speaking part, which is just as well, because when her character does speak, it is the unnatural voice of a dubbing artiste you hear - voicing outdated "sulking-wife" clichÃ©s.

Annu Kapoor and Vijay Raaz are perhaps the only streaks of brilliance in what is an otherwise shoddy film. Mugdha Godse gets to wear hot pants and hug and kiss Akshaye Khanna, and Murli Sharma is in a joke of a role.

The entire movie has a mediocre look and feel. And the music is by an Anu Malik who's probably ruing the fact that he's being given credit for it. Veena Malik's item song is quite garish - both to hear and to watch. Nothing, really, is right with GGCH, and you must definitely skip it.
Share. Save. Connect.
Tweet
GALI GALI CHOR HAI SNAPSHOT

ADVERTISEMENT
This page was tagged for
Gali Gali Chor Hai hindi movie
Gali Gali Chor Hai reviews
release date
Akshaye Khanna, Shriya Saran
theatres list
Follow @fullhyderabad
Follow fullhyd.com on
About Hyderabad
The Hyderabad Community
Improve fullhyd.com
More
Our Other Local Guides
Our other sites
© Copyright 1999-2009 LRR Technologies (Hyderabad), Pvt Ltd. All rights reserved. fullhyd, fullhyderabad, Welcome To The Neighbourhood are trademarks of LRR Technologies (Hyderabad) Pvt Ltd. The textual, graphic, audio and audiovisual material in this site is protected by copyright law. You may not copy, distribute, or use this material except as necessary for your personal, non-commercial use. Any trademarks are the properties of their respective owners. More on Hyderabad, India. Jobs in Hyderabad.