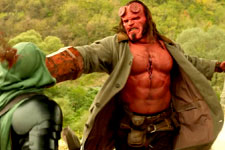 Punarvasu Pendse / fullhyd.com
EDITOR RATING
4.0
Performances
Script
Music/Soundtrack
Visuals
6.0
3.0
5.0
5.0
Suggestions
Can watch again
No
Good for kids
No
Good for dates
No
Wait for OTT
Yes
The 2019 reboot of the beloved Hellboy franchise does away with director Guillermo del Toro, and with that, takes away his penchant for finding art - nay, beauty - in the grotesque. Also gone is Ron Perlman, who played the big, red dude that won so many people over. Hell (no pun intended), the movie could even come with a disclaimer - do not compare with del Toro's version if you wish to enjoy it even a little bit.

Instead we have director Neil Marshall known for having directed two of the most important episodes of Game Of Thrones along with a few movies. Despite his obvious talent, however, Marshall's vision of Hellboy is chaotic to say the least, and it is evident from the very beginning.

Hellboy starts decently enough, as we are introduced to the fifth century sorceress Blood Queen Nimue (Milla Jovovich) and her plan to take over the world. Ironically, the movie takes a turn for the worse as soon as we are introduced to the titular character. From this point onwards, it is a chore to summarise the film without spoiling it because of the sheer amount of convoluted plotlines that it tries to cram into one sitting. Hellboy (David Harbour), a member of the Bureau for Paranormal Research and Defense, goes on a journey to track and stop Nimue from completing her devious plans.

Along the way, Hellboy meets his friend Alice Monahan (Sasha Lane) who happens to be a psychic, and a British intelligence operative Ben Daimio (Daniel Dae Kim) that his father Professor Broom (Ian McShane) has enlisted to work with him. Dragged into the whirlwind that is Hellboy's mission, the trio set out, but not before the origin story of almost every character is shown to you, generally in the form of a flashback. The movie also very squarely and unsubtly leaves you a hint about a sequel.

Subtlety isn't Hellboy's strongest suit, but that isn't necessarily a bad thing each time. Obviously goofy moments in an otherwise dark setting force quite a few laughs in unexpected places, and the fact that Hellboy does not take itself very seriously makes for some entertaining, campy shenanigans. The seemingly-endearing character of Hellboy wears off quickly, but Hellboy himself is nevertheless enjoyable for the most part.

The movie was made on a modest budget, and it shows in some CGI scenes. Worse still are the very average action scenes which are a bummer in a film of that genre. The most glaring issue with Hellboy remains the script, however - it is a complete mess. Unnecessary amounts of exposition, needlessly complicated parallel plotlines, and a gung-ho treatment of gore and violence bog down the story significantly. Hellboy has nothing truly memorable that we can quote in terms of dialogue writing, either.

David Harbour, who is known for his quirky role in Stranger Things, is wasted by the script. It doesn't allow for much father-son bonding between Ian McShane and David Harbour, but McShane manages to make an impression during one or two scenes. Milla Jovovich, who has kicked ass in many a prior outing, has pretty much nothing to do. Even then, she has the vampy look and attitude down pat.

Daniel Dae Kim does a weird British accent and not much else (he doesn't get to do much, but doesn't mean his character has the same issue!). Sasha Lane plays a clairvoyant and does what the script demands satisfactorily, again with an English accent that seems off. She does get cool moments where she channels the spirits of the dead, but even that loses its charm after the first time.

In a vacuum, Hellboy would be a fun (if one-time) watch that has some cool moments, but is nothing spectacular. It doesn't take itself seriously, and Mike Mignola's character is plenty of fun by itself.

Comparisons aren't always fair, but the fact remains that you're probably better off watching the original (along with its fun follow-up). What is the point of doing a reboot if the original is arguably superior?
Share. Save. Connect.
Tweet
HELLBOY (2019) SNAPSHOT 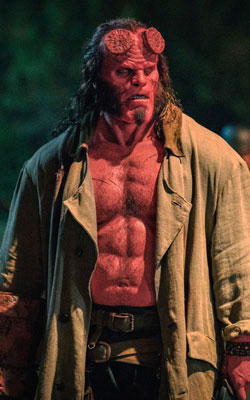 ADVERTISEMENT
This page was tagged for
hellboy 2019 review english
Hellboy (2019) english movie
Hellboy (2019) reviews
release date
David Harbour, Milla Jovovich
Follow @fullhyderabad
Follow fullhyd.com on
About Hyderabad
The Hyderabad Community
Improve fullhyd.com
More
Our Other Local Guides
Our other sites
© Copyright 1999-2009 LRR Technologies (Hyderabad), Pvt Ltd. All rights reserved. fullhyd, fullhyderabad, Welcome To The Neighbourhood are trademarks of LRR Technologies (Hyderabad) Pvt Ltd. The textual, graphic, audio and audiovisual material in this site is protected by copyright law. You may not copy, distribute, or use this material except as necessary for your personal, non-commercial use. Any trademarks are the properties of their respective owners. More on Hyderabad, India. Jobs in Hyderabad.