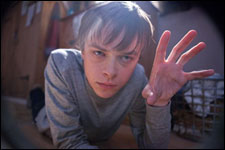 Samrat Sharma / fullhyd.com
EDITOR RATING
7.0
Performances
Script
Music/Soundtrack
Visuals
8.5
8.5
5.0
6.0
Suggestions
Can watch again
Yes
Good for kids
No
Good for dates
Yes
Wait for OTT
No
Chronicle is a good film - which came as a surprise to me as the movie got into about 20 minutes. Sold as a found-footage style film about superhero origins, it turns out it is none of those things. It plays with those tropes; skirts around them, and creates its own tale of urban kids doing something they never dreamed of.

The cinÃ©ma vÃ©ritÃ© styling of Chronicle is immediately debunked when we realize that this isn't a fixed-perspective one-camera thing, and it does not have a beginning and an end title card telling us the fate of the footage. More importantly, there are no sloppy edits, jumping in and out of the action to disorient us. There are multiple angles for each shot, including security camera footage, phone camera, and different handheld cameras. The editing is almost classical - the story and emotion of a scene is more important than any style statements the filmmakers would want to make, and that is completely refreshing.

There is an explanation given for the camera footage, to an extent. Andrew (Dane DeHaan) carries a camera all the time, and as his friends, Matt (Alex Russell) and Steve (Michael B Jordan), come in touch with an odd alien growth, Andrew documents every moment of their effects and consequences.

As these effects begin to include powers like telekinesis, flight and speed, all 3 boys begin to experiment with what they can get away with. Always under the watchful eye of Andrew and his camera, of course. This is where Chronicle breaks away from the second trope. Instead of a superhero film, we get to see how 3 normal teenagers would react to sudden power.

They use their powers to have fun, play practical jokes, and to impress girls. They don't even question the choices they make, as youth is wont to do - they just do things. Having the power to do things and experience the world like no other human can will come with consequences, which they don't care about. The movie explores the notion of personal choice and corruption of power as everything goes downhill from here.

Some of the choices these guys make are the exact kinds that take you down a dark path. They let their emotions and desires overshadow their empathy and judgement, leading to often disastrous results. While some heroism seeps in, this is mostly a film about the results of uncaring acquiescence to your own instincts.

It's a fun little movie that explores these areas, while at the same time, letting us in the shoes of these incredibly powerful young men, and letting us see their lives. The performances by all 3 of them are absolutely wonderful, and all 3 very different characters help to create different moods, giving a film with handheld cameras a dynamism that was unseen before.

This is also a special little movie, which really did not have to go the found-footage style. However, in doing so, while it loses some thing, it gains a fantastic story and some great moments. The overuse of the style may make your mileage with Chronicle vary, but for those who look beyond that, will find a film anchored by very good performances and a great little plot.
Share. Save. Connect.
Tweet
CHRONICLE SNAPSHOT

ADVERTISEMENT
This page was tagged for
Chronicle english movie
Chronicle reviews
release date
Dane DeHaan, Alex Russell
theatres list
Follow @fullhyderabad
Follow fullhyd.com on
About Hyderabad
The Hyderabad Community
Improve fullhyd.com
More
Our Other Local Guides
Our other sites
© Copyright 1999-2009 LRR Technologies (Hyderabad), Pvt Ltd. All rights reserved. fullhyd, fullhyderabad, Welcome To The Neighbourhood are trademarks of LRR Technologies (Hyderabad) Pvt Ltd. The textual, graphic, audio and audiovisual material in this site is protected by copyright law. You may not copy, distribute, or use this material except as necessary for your personal, non-commercial use. Any trademarks are the properties of their respective owners. More on Hyderabad, India. Jobs in Hyderabad.