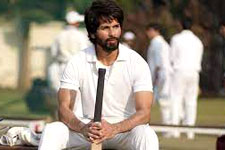 Punarvasu Pendse / fullhyd.com
EDITOR RATING
7.0
Performances
Script
Music/Soundtrack
Visuals
7.0
7.0
6.0
7.0
Suggestions
Can watch again
Yes
Good for kids
Yes
Good for dates
Yes
Wait for OTT
No
Shahid Kapoor sure does love his Telugu remakes. Back to the large screen after starring in Kabir Singh, a remake of Arjun Reddy, Kapoor is now starring in a movie that is a remake of the Telugu film Jersey.

Like Sandeep Reddy Vanga wrote and directed Arjun Reddy and Kabir Singh, Gowtam Tinnanuri is at the helm of both the Jersey films. And the duo of Siddharth-Garima have once again been roped in to write the Hindi version's dialogue. That is a rather long list of similarities.

26-six-year-old Arjun Talwar has everything going for him - he is the best batsman in Punjab's Ranji team, he is in the Duleep Trophy squad representing the North Zone, he recently got married to his supportive girlfriend-turned-wife Vidya, and his coach Bali (Pankaj Kapur) is the biggest believer in his abilities.

36-year-old Arjun Talwar, however, is the exact opposite - cricket career long forgotten, penniless after being suspended from his government job on charges of corruption, marriage with Vidya teetering, and coach Bali on his case constantly urging him to become an assistant coach.

The only bright spot in his life is his son Kittu (Ronit Kamra), who looks up to his father and is the one person that Arjun believes does not judge him at all. And it's his promise to Kittu to get him an original jersey of the Indian cricket team that motivates Arjun to fight against all odds.

Jersey is an almost frame-by-frame remake of the original, and as such we will refrain from talking about the original unless it is necessary to do so. The Punjabi touch that distinguishes Jersey from the original Telugu film is heavy-handed at times and missing elsewhere, and rather unconvincing overall. The Hindi version has a duration that is longer by 11 minutes, and we're sure there's a Paulo Coelho joke in there somewhere (hint: the 11 minutes only serve to make the film overly long and stretched - and we should really stop and get back to the review because these jokes will keep writing themselves).

However, the one thing that you will love about Jersey is how clear it is with cinematic demarcation - how it clearly has a yin to every yang. There are several - Arjun at 26 (everything going for him) vs Arjun at 36 (nothing going for him), or Vidya at 26 (bright-eyed and hopeful) vs Vidya at 36 (listless and jaded), or Arjun on the field (flamboyant) vs Arjun off the field (restrained) - with the line being crossed very clearly shown. Also, Arjun's kitbag (plain, old and used) vs the kits of the younger players (modern kits, even having sponsor logos) that puts an extra emphasis on the age gap between them. We also really enjoyed a scene where Arjun goes to a train station to joyfully let loose, but masks his yells of elation with the sound of a train which feels true to his phlegmatic nature.

Shahid Kapoor is given a role that allows him to exhibit his full range, in a character that is in stark contrast to his unhinged persona in Kabir Singh. Mrunal Thakur is burdened with a character that has very conflicting views, but she does not look out of place at any moment. The chemistry between the leading pair is serviceable, if not electric.

Pankaj Kapur is easily the best performer, and manages to portray the typical father-figure coach character without making it seem dull or clichéd. Ronit Kamra reprises his role from the original Telugu version, and is somehow too nice and too supportive for a kid.

Anirudh Ravichander goes ham on the score, as he did with the original, and a touch of restraint would have gone a long way. The background is loud and supportive in the many cricketing action sequences the film has, but goes forgotten in softer, more nuanced scenes. Sachet-Parampara's tracks are rousing, with a romantic touch in all of them, and are memorable enough.

A faithful remake of a good film, Jersey is ultimately the story of a father-son relationship. Despite a slightly weak climax (sorry, had to sneak in one last one), it is a heartwarming film about loss and redemption, and as such deserves a recommendation.
Share. Save. Connect.
Tweet
JERSEY (HINDI) SNAPSHOT 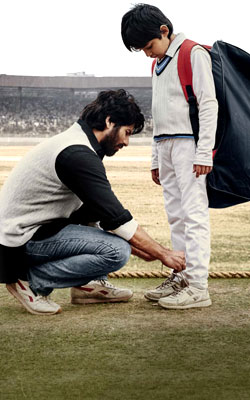 ADVERTISEMENT
This page was tagged for
Jersey (Hindi) hindi movie
Jersey (Hindi) reviews
release date
Shahid Kapoor, Mrunal Thakur
theatres list
Follow @fullhyderabad
Follow fullhyd.com on
About Hyderabad
The Hyderabad Community
Improve fullhyd.com
More
Our Other Local Guides
Our other sites
© Copyright 1999-2009 LRR Technologies (Hyderabad), Pvt Ltd. All rights reserved. fullhyd, fullhyderabad, Welcome To The Neighbourhood are trademarks of LRR Technologies (Hyderabad) Pvt Ltd. The textual, graphic, audio and audiovisual material in this site is protected by copyright law. You may not copy, distribute, or use this material except as necessary for your personal, non-commercial use. Any trademarks are the properties of their respective owners. More on Hyderabad, India. Jobs in Hyderabad.