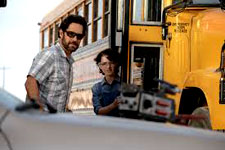 Thoroughly enjoyable hit of nostalgia. / fullhyd.com
EDITOR RATING
7.0
Performances
Script
Music/Soundtrack
Visuals
7.0
7.0
7.0
7.0
Suggestions
Can watch again
Yes
Good for kids
Yes
Good for dates
Yes
Wait for OTT
No
After the controversial 2016 reboot of the much-loved Ghostbuster movies, Columbia Pictures and Sony play it safe by identifying and honing in on the one aspect of any beloved franchise that its audience responds to - nostalgia.

Everything about Ghostbusters: Afterlife is intended to induce nostalgia for fans of the '80s cult franchise. Yes, they are probably watching it with their children or grandchildren, but make no mistake - they are part of the demographic this movie is targeting. From the director, Jason Reitman, who happens to be the son of the original director Ivan Reitman to the familial link of the movie's new stars and its old, everything is connected in some way or the other.

Purists may argue that catering to nostalgia has become increasingly more entrenched in the Hollywood psyche, but if it's what the average viewer wants, everything else be damned. The most important aspect of your average commercial film is entertainment - everything else is secondary. And director Jason Reitman manages to somehow incorporate all possible nostalgia, along with his own personal imprint, to make an entertaining family film.

Ghostbusters: Afterlife is the story of a bankrupt woman (Carrie Coon) and her family who need to move to a ramshackle estate in the middle of nowhere, the only thing bequeathed to her by her deceased father. A series of mildly spooky events piques the interest of her precocious daughter Phoebe (Mckenna Grace), whose investigations on the earthquakes affecting the quaint town of Summerville point to something much more sinister.

Teaming up with her classmate Podcast (Logan Kim), Phoebe has to unearth the truth behind the mysterious happenings in the abandoned mine outside the village, aided by their weird teacher Gary Grooberson (Paul Rudd), and later by her brother Trevor (Finn Wolfhard).

Ghostbusters: Afterlife has some genuinely funny writing. The first few minutes set the tone of the film with some fantastic quips, and the movie strides along delivering laughs, scares and action at equal paces. The film starts out as a mystery, but casts it aside for full-blown action by the second half - and does both quite decently.

The characters are well-written, albeit some a little heavier on the nostalgic side. The critical approach is often against nostalgia as we mentioned earlier on, but it isn't necessarily a bad thing. Ghostbusters: Afterlife leans in on its own predecessors in such an earnest manner that it is hard to fault it as just another commercial cash-grab. Yes, we think so despite Jason Reitman announcing that he wanted to bring forth the concept of "anyone can be a Ghostbuster" which potentially opens the doors for a Ghostbusters universe.

Mckenna Grace is assured in her performance as the nerdy, science and bad jokes enthusiast Phoebe. Carrie Coon has some highs and lows as the tense single mother Callie, and Finn Wolfhard is underutilised, making them somewhat less interesting compared to their third family member. Paul Rudd seems to have had fun being a goofy amateur parapsychologist, and adds a certain level of charm to the proceedings.

But by far the most memorable performance is by young Logan Kim as Podcast, Phoebe's supernatural phenomenon-obsessed classmate, who is both maddening and endearing in equal amounts. Some old favourites return for cameo appearances, but that's all we're going to say about it.

The film is set in rural America, a marked difference from the concrete jungles of New York where the earlier films were based. The mood and its colour palette need to change accordingly, and cinematographer Eric Steelberg is up to the task. Rob Simonsen's score does what it needs to, hyping up scenes and fading into the background as demanded by the script. The most fun song is during the end-credits, however - the one you'll recognise and want to hum along to.

Ghostbusters: Afterlife manages to both be a lovely film for the younger generation to enjoy and a nice nostalgia hit for their parents or grandparents. It has an honest reverence for its prequels, and its own potential - what more can you expect?

Was this a necessary, long-awaited film? Not particularly. Is it enjoyable, despite that? Thoroughly. 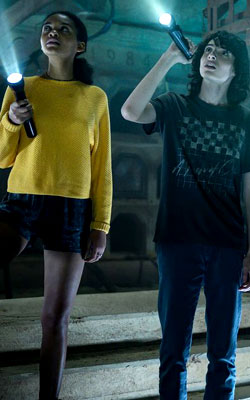 ADVERTISEMENT
This page was tagged for
Ghostbusters: Afterlife english movie
Ghostbusters: Afterlife reviews
release date
Mckenna Grace, Finn Wolfhard
theatres list
Follow @fullhyderabad
Follow fullhyd.com on
About Hyderabad
The Hyderabad Community
Improve fullhyd.com
More
Our Other Local Guides
Our other sites
© Copyright 1999-2009 LRR Technologies (Hyderabad), Pvt Ltd. All rights reserved. fullhyd, fullhyderabad, Welcome To The Neighbourhood are trademarks of LRR Technologies (Hyderabad) Pvt Ltd. The textual, graphic, audio and audiovisual material in this site is protected by copyright law. You may not copy, distribute, or use this material except as necessary for your personal, non-commercial use. Any trademarks are the properties of their respective owners. More on Hyderabad, India. Jobs in Hyderabad.