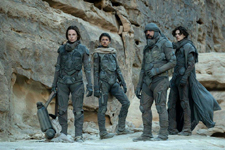 Punarvasu Pendse / fullhyd.com
EDITOR RATING
7.0
Performances
Script
Music/Soundtrack
Visuals
8.0
7.0
7.0
7.0
Suggestions
Can watch again
Yes
Good for kids
No
Good for dates
No
Wait for OTT
No
For years, Frank Herbert's space-operatic novel Dune was considered to be unadaptable for the big screen. A director of David Lynch's calibre was unable to do justice to it (yes, this is a polarising opinion on a polarising film, but the negative opinions outnumber the positives). What we are trying to say is, Dune is an extremely ambitious project, and one that would need a budget to match its ambition.

Director Dennis Villeneuve set out to do just that, with the help of Legendary Pictures, and to his credit has delivered for the most part. Dune has already been greenlit for a sequel in 2023, which was the original intention - a two-part cinematic extravaganza.

Dune takes place in the far future, where the people in power are reminiscent of feudal lords, complete with ridiculous costumery and political sigils. Young Paul Atreides (Timothée Chalamet) has to move with his entire family and extended clan to the desert planet of Arrakis, or "Dune", to take charge of the "spice" trade, spice being a mineral that is necessary for navigating space travel. Paul has the noble legacy of not only his father Leto Atreides (Oscar Isaac) to fulfill, but also his mother Jessica (Rebecca Ferguson), who is part of an all-women magical order called Bene Gesserit.

Facing immense political danger and exposed to the harsh natural conditions of an unknown planet, the young messiah is thrust into a world that has machinations that are far bigger in scope than himself. Coupled with dreams that haunt him, and a mysterious face of a woman who refuses to leave his mind, Paul is in for an ordeal that is beyond anything he can imagine.

As was abundantly evident in his previous film Blade Runner 2049, Villeneuve is a big proponent of exposition, of rewarding patience with narrative payoffs - the viewer gets treated to rich underlying themes, heavy world-building, and a fantastic eye for detail. Nearly two-thirds of the movie's 156-minute runtime is spent in setting you up for what is to come, which is rare for modern science-fiction.

Villeneuve is also a master at weaving between the giant, ever-looming political conflict and the intimate, personal character-building, and Dune's scope allows him to heavily lean in onto that aspect. And in spite of all this and the esoteric lore of the book it is based on, Dune was not hard to follow for a person who went into the theatre (on purpose) with no knowledge of the series.

There are still unanswered questions, but those I understood after having a conversation with a friend who has read the source material. Here's a transcript:

Me: Why do futuristic people use sword-like weapons instead of firearms?

Friend: Shield technology has basically rendered ballistic weaponry useless. It was sort of explained during Paul's fight training scene with Gurney Halleck (Josh Brolin) - that "The slow blade penetrates the shield". The only way to surpass these shields is to attack with slow, piercing weapons.

Me: Missed that - it should have been spelled out more explicitly than that. If so, why do those huge spaceship-mounted weapons destroy shields?

Friend: In the books, lasguns and shield fields operate at non-harmonic frequencies relative to each other - if you shoot a force field with a laser they will deconstructively interact and both will explode with nuclear force destroying everything.

Me: That is a lot of explanation for something my brain put aside as "stylistic choice", phew.

Anyway, it takes a certain kind of person to enjoy almost a hundred minutes of low-action, slow-paced narrative exposition (and it is perfectly valid not to - hell, I am generally not that kind of a person). Dune also has issues with the visuals, which, despite being high in production value and intricate, often suffer from dullness. Unlike Blade Runner 2049 which had vibrant purple outbursts of colour punctuating the darker cyberpunk aesthetic, Dune is firmly grey and sepia - which created sensory fatigue in an IMAX setting. Conversely, Dune is self-righteous and pretentious enough to appeal to the kind of people that have to have sepia overtones and zero laughs for their entertainment to feel "important".

Timothée Chalamet and Rebecca Ferguson are the characters with the most screen time, and both are impressive, Ferguson surprisingly more so. Besides them, Dune has a huge supporting cast of well-known actors, and pretty much everyone is fantastic (okay, maybe not Dave Bautista).

This is the second film in a row where I am not as impressed with Hans Zimmer's score. The music is very loud at places, enough to be distracting, though maybe it is to take away from the languid pacing of the movie. That's not to say the music or the background score are bad - far from it. It was just a little below the expectation this reviewer has from Zimmer.

You can dismiss this as a strange write-up, considering I mentioned more negative aspects than positive - despite enjoying the movie overall. But it's the kind of movie some critics adore to adore, and others adore to take apart - and I made an effort to view it from both sides, sue me. 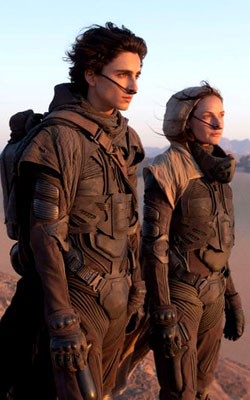 ADVERTISEMENT
This page was tagged for
Dune english movie
Dune reviews
release date
Timothée Chalamet, Rebecca Ferguson
theatres list
Follow @fullhyderabad
Follow fullhyd.com on
About Hyderabad
The Hyderabad Community
Improve fullhyd.com
More
Our Other Local Guides
Our other sites
© Copyright 1999-2009 LRR Technologies (Hyderabad), Pvt Ltd. All rights reserved. fullhyd, fullhyderabad, Welcome To The Neighbourhood are trademarks of LRR Technologies (Hyderabad) Pvt Ltd. The textual, graphic, audio and audiovisual material in this site is protected by copyright law. You may not copy, distribute, or use this material except as necessary for your personal, non-commercial use. Any trademarks are the properties of their respective owners. More on Hyderabad, India. Jobs in Hyderabad.