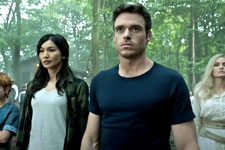 Punarvasu Pendse / fullhyd.com
EDITOR RATING
5.0
Performances
Script
Music/Soundtrack
Visuals
6.0
5.0
7.0
7.0
Suggestions
Can watch again
No
Good for kids
Yes
Good for dates
Yes
Wait for OTT
Yes
Eternals was a movie many had been waiting for - it had an Academy Award-winning director in Chloé Zhao, an exciting and diverse cast filled with both Hollywood A-listers and relatively new faces, and of course the Marvel movie bit. Unfortunately, the film becomes a case of what could have been.

Chloé Zhao is the first Oscar-winning director to helm a Marvel project, and the result is a mixed bag. The scope of the film is impressive, its cinematography is lavish and gritty (with extensive use of natural light, the movie's colour palette is darker - a marked difference from the colourful eye candy that Marvel usually offers), and the tone is philosophical and reflective.

However, on the other hand, not only does it lack the easygoing, "fun" vibe that Marvel movies have been synonymous with, the film's 157-minute runtime seems like it is simultaneously too long and too short at the same time - as it is a drag for pretty much the entirety of its run time, while also giving some of the more interesting plot points in the movie no attention. Maybe it would have benefited the Eternals franchise to be a series instead of a movie, but what do we know?

The Eternals are a bunch of superheroes sent on a mission by a Celestial named Arishem on Earth to protect humanity from an invasive species called Deviants. There are ten Eternals, each with their own unique power(s), who have worked together to save humanity from Deviants since the dawn of civilisation - with flashbacks taking us to Mesopotamia in 5000 BC, Babylon in 575 BC, the Gupta Empire in AD 400, and Tenochtitlan in 1521 - without meddling in human conflict.

While all this seems grand on paper, consider this - you are a superhero stuck in a random human form (including a major plot point about a character that doesn't enjoy their human form at all) for all life. You cannot intervene in any human conflict - not world wars, not genocide, not a possible climate or nuclear disaster, nothing at all. Nope, your only fight is against weird-looking muscular tree-like beings. Did we tell you that even when your task is done, you're not allowed to leave earth because the Deviants might return? Oh, and should you fail, you face the Arishem's wrath.

It just seems, to not put too fine a point on it, pointless. In trying to pursue more philosophical ideas and emotional complexity, director Chloé Zhao seems to have lost track of what makes Marvel movies so popular - namely the fact that they are fun.

Eternals is a film that contemplates "humanity" and how these lofty demigods (quite literally - the Eternals have become enmeshed with different mythologies with a little variation in spelling, like Thena turning to Athena in Greek mythology) learn to love humans with all their faults. There are, however, no humans to actually illustrate that they matter. Apart from Karun (Harish Patel), the valet of Kingo (Kumail Nanjiani); and Dane Whitman (Kit Harington), the love interest of Sersi (Gemma Chan); there are no named human characters - all we see are lofty ideals as visualised by the Eternals. Very akin to a colonialist view, mind you, and very surprising from someone like Chloé Zhao.

The star cast is stellar, but they are stuck in a bizarrely written screenplay (why else would characters who know each other for thousands of years still refer to each other by their first names when speaking seemingly important dialogue such as "I'm in love with you, Sersi"?). The performances, however, are less than stellar from a few - namely Barry Keoghan who plays Druig, Lia McHugh who plays Sprite, and Richard Madden who plays Ikaris - they have one emotion on display the whole time (smugness, disinterest and moral superiority respectively, if you are curious). The big names - Angelina Jolie and Salma Hayek - look cool, but have little else to do.

Marvel movies often have similar storylines - they're superhero films after all - and the "save the world" syndrome is obviously expected. We did not, however, expect one thing played over and over again in a single film: the Eternals get to a place, fight Deviants, superficially interact with the local humans, face some setback - rinse and repeat. This is a movie that feels too long as a single entity, too short as an introduction to the sheer number of entirely unseen characters from the Marvel Cinematic Universe in it, and never (to quote Goldilocks) "just right".
Share. Save. Connect.
Tweet
ETERNALS SNAPSHOT 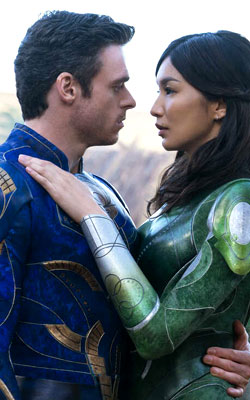 ADVERTISEMENT
This page was tagged for
Eternals english movie
Eternals reviews
release date
Gemma Chan, Richard Madden
theatres list
Follow @fullhyderabad
Follow fullhyd.com on
About Hyderabad
The Hyderabad Community
Improve fullhyd.com
More
Our Other Local Guides
Our other sites
© Copyright 1999-2009 LRR Technologies (Hyderabad), Pvt Ltd. All rights reserved. fullhyd, fullhyderabad, Welcome To The Neighbourhood are trademarks of LRR Technologies (Hyderabad) Pvt Ltd. The textual, graphic, audio and audiovisual material in this site is protected by copyright law. You may not copy, distribute, or use this material except as necessary for your personal, non-commercial use. Any trademarks are the properties of their respective owners. More on Hyderabad, India. Jobs in Hyderabad.