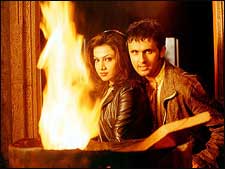 Neha Tejuja / fullhyd.com
EDITOR RATING
5.0
Performances
Script
Music/Soundtrack
Visuals
NA
NA
NA
NA
Suggestions
Can watch again
NA
Good for kids
NA
Good for dates
NA
Wait to rent it
NA
The key to pulling off a movie with absolutely no originality in its story is to make it with good actors. We all know that. Wish somebody had told this to Rajat Mukherjee before he made Love In Nepal.

Love In Nepal starts with Sonu "Why-do-you-ask-if-I-need-a-suppository?" Nigam, looking blissfully unaware of the term 'acting'. He is Abhinav Sinha aka Abby, the Creative Head / flirt of an ad agency which is on the brink of a merger with an MNC.

This is where the oomph factor comes in. In walks Fllora Saini, Testosterone Stimulating Babe #1, as Maxi. The merger is settled, and Meenakshi Malhotra aka Maxi takes charge of the ad agency. But who the boss is remains unanswered. Abby walks around looking like he owns the place, trying to throw attitude around, but gets it confused with turning on the charm, and thus ends up looking like he could desperately learn a thing or two from his counterpart, Maxi.

Maxi has absolutely no confusion when it comes to playing her part. Her expressions for anger, disgust, love and exasperation remain unaltered. (Tip: If you are trying to cut costs when making a movie, use the same still for every expression.)

As the title of the film suggests, the entire crew flies down to Nepal to shoot an ad film. This is where the other woman steps in. In walks Testosterone Stimulating Babe #2, Tanya (Jharna Bajracharya).

What you understand over the din of the catcalls, hoots and whistles over the next half hour is that after a lot of 'Are you cwazee' and 'You are disgusting', Maxi does the unthinkable: she falls in love with Abby, who - surprise, surprise - loves her with an intensity he has never felt before. At least that is what it seemed like from the pained look on his face. Or was that just the indigestion?

Anyway, this blossoming love is nipped in its bud by Tanya who swoops in on Abby and tries to seduce him with 5 minutes of bust thrusts and pelvic pushes and... (catcalls and whistles drown every other sound). But our man doesn't sway! Only, the next morning he wakes up in bed with TSB #2, and as fate would have it (no, no, not main tumhaare bachche ki maa banne wali hoon routine), she has been murdered.

So now Abby finds himself caught in a drug racket of mammoth proportions - 'cos TSB #2 was actually involved in a whole croc of crap. And now follow all the chases involving the Nepali mafia and cops. After a lot of gun-wielding and trying to solve the murder mystery, the movie reaches the end.

What has become of his lady love in the meanwhile? She stands by her man through all of this, through dope clubs, through chases and does her bit (and his, too) of looking pretty and dancing. The chases and fight scenes earn the occasional laughs.

The music isn't extraordinary, and the direction could use a lot of sprucing up. Could someone please tell Sonu Nigam to stick to singing? And while you are at it, make Fllora Saini hit the ramp. The only thing that makes the film hit average is the humor - although slapstick. All in all, a must-watch only if you have killed all but your brain on a long summer afternoon. Love In Nepal will take it from there!
Share. Save. Connect.
Tweet
LOVE IN NEPAL SNAPSHOT

ADVERTISEMENT
This page was tagged for
Love In Nepal hindi movie
Love In Nepal reviews
release date
Sonu Nigam, Fllora Saini
theatres list
Follow @fullhyderabad
Follow fullhyd.com on
About Hyderabad
The Hyderabad Community
Improve fullhyd.com
More
Our Other Local Guides
Our other sites
© Copyright 1999-2009 LRR Technologies (Hyderabad), Pvt Ltd. All rights reserved. fullhyd, fullhyderabad, Welcome To The Neighbourhood are trademarks of LRR Technologies (Hyderabad) Pvt Ltd. The textual, graphic, audio and audiovisual material in this site is protected by copyright law. You may not copy, distribute, or use this material except as necessary for your personal, non-commercial use. Any trademarks are the properties of their respective owners. More on Hyderabad, India. Jobs in Hyderabad.