Venom: Let There Be Carnage Review 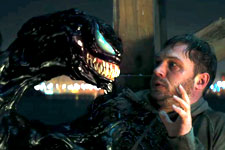 Punarvasu Pendse / fullhyd.com
EDITOR RATING
6.5
Performances
Script
Music/Soundtrack
Visuals
7.0
6.0
5.0
6.0
Suggestions
Can watch again
Yes
Good for kids
Yes
Good for dates
Yes
Wait for OTT
No
The first hints of the extended Spider-man multiverse were seen during the post-credits scene for the original Venom in 2018, followed by the actual movie the aforementioned scene was from - Spider-Man: Into The Spider-Verse, which firmly established the concept. But wait, there's more - there's a connection with both the multiverse and the extended Marvel Cinematic Universe being teased with the new trailer for the upcoming Spider-Man: No Way Home.

What is the point of all this information? Find out after watching the post-credits scene for Venom: Let There Be Carnage! Sorry, couldn't resist, but we'll explain - Sony and Marvel seem to have reached an understanding regarding the Spider-man franchise that includes all of the extended Spiderman IP. This is pretty massive, and we're looking forward to seeing more of the web-slinging superhero (and all of his supporting heroes, villains, and, of course, anti-heroes).

Speaking of anti-heroes, Venom: Let There Be Carnage is the sequel to the surprise hit of 2018, Venom, that critics panned and audiences enjoyed. This, of course, led to a sequel, complete with a new director, Andy Serkis, and a new cinematographer, Robert Richardson - and lead actor Tom Hardy now sharing writing credits with Kelly Marcel.

Eddie Brock (Tom Hardy) is now again on top in the journalistic sphere, thanks to his symbiotic relationship with Venom. His exploits attract the attention of death row inmate Cletus Kasady (Woody Harrelson), who manages to get Brock to attend his execution despite Venom's hesitance. Venom manages to lose his cool, and Cletus gets in on Eddie's secret - giving rise to Carnage, Venom's blood-thirsty spawn.

Cletus' attempts to marry his childhood sweetheart Frances Barrison/Shriek (Naomie Harris) lead to all-around chaos that shoves aside Brock's love/hate relationship with the symbiote Venom - and the duo truly realise what it means to have a symbiotic relationship.

Despite the changes at the helm, Venom: Let There Be Carnage manages to hold on to the first movie's biggest strength - its silliness. The minds behind the sequel realised that the audience enjoyed the goofy camaraderie between Brock and Venom more than any larger-than-life, world-is-at-stake action sequences (we have a sneaking suspicion that Tom Hardy being a writer on the movie might have something to do with this), and heavily leaned onto the emotional side of the film.

What we end up getting, is perfectly serviceable if unimpressive action sequences paired with the intense realisation that the symbiote has had a positive, emotional impact on people beyond just his host Eddie. And a story more focused on romance than your average superhero flick - between Cletus and Frances, between Eddie and his ex-fiancée Anne Weying (Michelle Williams), and finally a somewhat queer-leaning relationship between Eddie and Venom (at one point Venom states he is out of Eddie's closet!). Unusual fare, indeed, especially considering that this is a movie that everyone expected was made just so Sony could make bank off the one character that still isn't tied up in a deal with Marvel.

As for the action, Venom: Let There Be Carnage gets a pass - most of the mayhem is over before you realise how CGI-stuffed it is. The film never drags along, and is briskly-paced at just a bit over 90 minutes, which is frankly surprising for a superhero movie.

Tom Hardy is having a ball! Him playing off of Venom's antics feels effortless, and you might be forgiven for not believing that he is enacting both roles. Our only complaint is that he makes a "loser" character feel so charismatic, and Eddie Brock could be a bit less so.

Michelle Williams has even less screen time than in the first movie. Thankfully, the "sexy Venom" bit is less pronounced than the first film - not that it (or the script, for that matter) does anything for her.

Woody Harrelson has tried his best at portraying a deranged murderer, though we suspect this movie is a half decade too late for him. The age difference between him and Naomie Harris is very apparent, and makes it hard to buy their "childhood lovers" dynamic. Naomie Harris also has little to do but shriek (no pun intended).

This is a film with two Eminem soundtracks, mind you, so you be the judge. The background score never tries to overpower the visuals, so it has that going for it. It's kind of amusing that Robert Richardson, Scorsese's longtime collaborator, is the cinematographer in Venom: Let There Be Carnage. Guess the multi-Oscar winner does think Marvel movies are cinema. 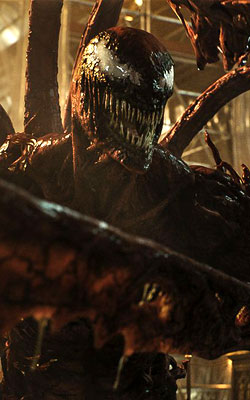 ADVERTISEMENT
This page was tagged for
Venom: Let There Be Carnage english movie
Venom: Let There Be Carnage reviews
release date
Tom Hardy, Michelle Williams
theatres list
Follow @fullhyderabad
Follow fullhyd.com on
About Hyderabad
The Hyderabad Community
Improve fullhyd.com
More
Our Other Local Guides
Our other sites
© Copyright 1999-2009 LRR Technologies (Hyderabad), Pvt Ltd. All rights reserved. fullhyd, fullhyderabad, Welcome To The Neighbourhood are trademarks of LRR Technologies (Hyderabad) Pvt Ltd. The textual, graphic, audio and audiovisual material in this site is protected by copyright law. You may not copy, distribute, or use this material except as necessary for your personal, non-commercial use. Any trademarks are the properties of their respective owners. More on Hyderabad, India. Jobs in Hyderabad.